For years now the Fed has worked to communicate clearly and signal its intentions ahead so as to never take the market by surprise.

Yet despite all those efforts, somehow there are still key pieces of information that are not communicated.

Today is a prime example. After the Fed’s last meeting in mid-March, the statement communicated a 25-basis point raise and a more aggressive rate-hiking outlook from all members. In the press conference following, Fed chair Powell said the committee had discussed balance sheet reduction but not made any firm decisions.

While that’s technically true, today the minutes from that meeting were released and it turns out they actually set amounts and a timeline: they plan to reduce their trillions in bond holdings by $95 billion a month, starting in May. They would not actually sell bonds; instead, they would not reinvest the proceeds from $60 billion worth of maturing Treasuries and $35 billion of maturing mortgage-backed securities. Until now, the Fed has kept its holdings steady by buying new bonds with the proceeds when old ones roll-off.

This is significant. They essentially agreed on amounts, timing, and style (they plan to let more short-term versus long-term bonds roll-off). But they specifically decided to not communicate this until weeks later, within the meeting minutes. The specificity of the decision is apparent in that Powell even noted during the press conference that the minutes “would provide details on the thinking about balance sheet reduction.”

Why?!? In most things in life, clear and immediate communication is essential to generate appropriate responses. The market has been obsessed with Fed thinking since the Great Financial Crisis, which is why the Fed started to focus on good communication. Why then hold this piece of information back?

The news slipped out yesterday when committee member Lael Brainard said in a speech yesterday that fighting inflation would require a combination of steady rate hikes and “aggressive balance sheet reduction”. Her comments pushed yields higher, by 20 basis points in many cases.

Yields have been marching higher for months, as they should given inflation and a tightening Fed, so in a sense, it doesn’t matter. I’m just annoyed at the game. Just communicate! 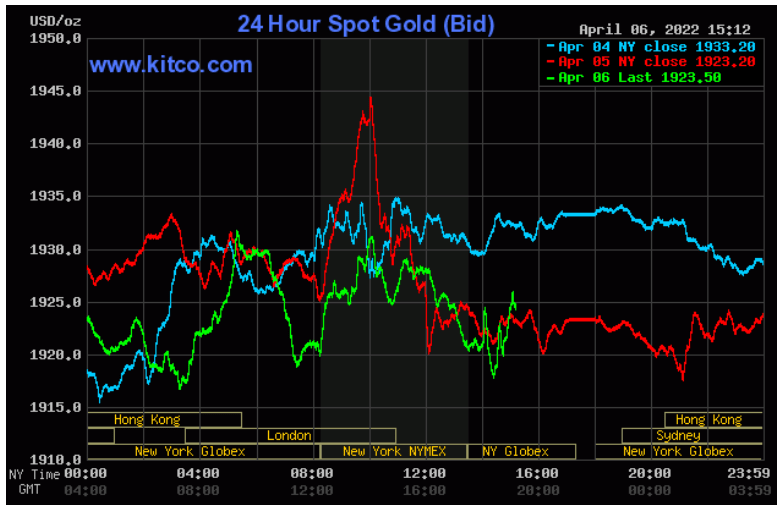 Nor should it care. Confirmation that the Fed will do what everyone assumed it would do is a non-event.

I won’t spend time on anything else macro today, other than to note that gold miners have been outperforming gold in recent weeks. Below are three-year daily charts of gold, HUI (the NYSE Arca index of unhedged gold miners), and GDX (another large index of gold miners). Thanks to Jordan Roy-Byrne of The Daily Gold for the charts.

The charts are pretty similar until the last month, which Roy-Byrne has highlighted in the mini charts to the right. Over March, gold trended down and across while miners stepped up and up. It’s a very good sign when miners outperform the metal.