Guanajuato Silver Company Ltd. (TSX-V:GSVR) (OTCQX:GSVRF) is pleased to announce that underground infill and expansion drilling has commenced at its El Cubo mine located 11km east of the city of Guanajuato, Mexico. Meanwhile, re-commissioning of the Company’s primary crusher has been completed in anticipation of the re-commencement of operations at the El Cubo processing plant (click for video).

GSilver has hired Rockdrill Mining S.A. de C.V. (Rockdrill) of Aguascalientes, Mexico to perform underground drilling at its El Cubo mine. GSilver is proud to include Rockdrill (whose clients include Barrick Gold Corp., Newmont Corp., and Pan American Silver Corp.) as another of our top tier service providers while we move El Cubo swiftly back into production.

The Rockdrill contract envisions a total of 5,200m of underground drilling, using one of their XRD50 machines to drill primarily NQ diameter holes, generally no more than 300m in length. The rig is ‘Bobcat’ mounted for ease of movement from drill station to drill station within the mine (see long- section and drill hole map below). 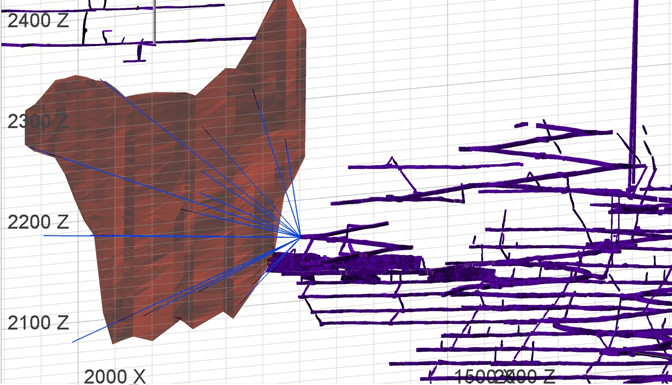 As the Company increases staff levels necessary for mining and plant operations in Guanajuato, our headcount in Mexico has naturally expanded significantly. As of August 21, 2021, GSilver has directly employed 168 people in Guanajuato, of which 167 (99.4%) are Mexican nationals, and 139 (83%) are from the state of Guanajuato.

COO Hernan Dorado commented: “We are especially proud of the large number of local people we have employed. Many are graduates of the University of Guanajuato, which is one of Mexico’s top geology, mine engineering, and metallurgical schools.”

Pre-commissioning of the plant’s primary crusher took place on August 25th (click for video). The primary crusher performed very well, achieving throughput of 160 tonnes per hour. New ball mill liners for the Company’s three ball mills arrived the same day. Installation of these liners, pre-commissioning of the secondary and tertiary crushers, as well as the installation of additional pumps and upgraded lubricating systems are all tasks necessary prior to the plant re-commencing operations which the Company continues to forecast for Q4, 2021.

Diamond drilling continues at GSilver’s El Pingüico project, located 8km from El Cubo. Drilling is ongoing using the Company’s Ingetrol 75E diamond drill. To date, the Company has reported results from 10 holes drilled since February 2021 (see highlights and long section below). GSilver is currently drilling P21-19; however results from assay offices in Mexico have been slow to arrive over the past several months. The Company will report additional results when received and fully interpreted by GSilver geological staff.

The long section below shows the completed holes in red, proposed holes in blue, and the current hole in green. The area being drilled was overlooked by historic miners 110 years ago because it did not meet the very high cut-off grades of that time. Improved mining methods allow the extraction and processing of much lower grades today. This area is easily accessible by the Company’s drill and drill crews, and drilling continues to show good grade and excellent continuity along the El Pingüico and San Jose vein structures. The Company anticipates this proposed drilling will be completed in January 2022, at which point GSilver will decide if it is appropriate to engage a third-party engineering firm to prepare a NI 43-101 resource estimate in this area. 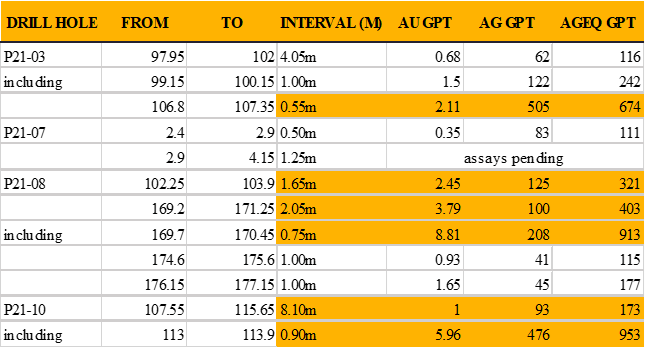 Hernan Dorado Smith, a director of GSilver and a “qualified person” as defined by National Instrument 43-101, Standards of Disclosure for Mineral Projects, has approved the scientific and technical information contained in this news release.

GSilver is a mining development company engaged in reactivating past producing silver and gold mines near the city of Guanajuato, Mexico. The Company is focused on the refurbishment and swift re-commencement of production from its El Cubo mine and mill and its nearby El Pingüico project, as well as the delineation of additional silver and gold resources through underground and surface drilling. Both projects are located within 11km of the city of Guanajuato, which has an established 480-year mining history.