Growing Up in a Recession

Growing Up in a Recession 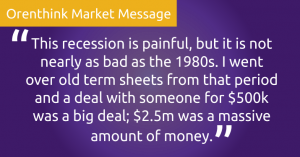 This recession is painful, but grow up — it is not nearly as bad as I remember the 1980s being. I went over old term sheets from that period and a deal with someone for $500k was a big deal; $2.5 million was a massive amount of money.

I grew up as a recession baby. I grew up in the mining business with a big crash for my father’s company when I was about 10. The crash was impactful, and I ended up very different because of it. Some of the things I do are classic recession baby stuff, others are irrational, but all of them are impacted by that period of my life.

I would not trade that time for anything. Growing up with these issues taught me how to deal with the world — six weeks’ delay on something is no problem, market hiccup not a problem. Need to sell stuff…then remember it’s just stuff, not people.

However, it taught me some interesting things:

Food: I always have 2-3 months of food in the house. I have three freezers full of meat, and when I run out of food, I panic. Every two years, my wife has to throw out a lot of stuff that goes bad, but I am just not comfortable unless I have enough food (that will last a while) around.

Luxury items: I do not really crave them. I crave stuff that works, but I do not care what brand my jeans are; I want them to fit, and I want them to be minimally hole-y. I am happy with any decent dress shirt that fits; I went custom when that was the only option due to being fat with a long torso and short arms, but now that I am fit, a slim fit shirt from Costco is my go-to $18 shirt.

Hotel rooms/travel: It’s a bed; I want a door that locks, a bed that is not shared with bugs or rented by the hour and still warm, and beyond that I want cheap. If I am doing a mining conference, I am known to take an apartment so that I can do morning meetings in a quiet spot, but for the most part, the Hojo is my go-to. Mr. Hilton/Sheraton are not on my date list.

First class: If I have gotten an upgrade or only a $50 difference in fare, it’s a great value to get to work on the plane; otherwise, nope.

Education: I spend everything I can on education as it is the only thing you get to take with you. I spend time learning stuff (thinking about stuff). I value both degrees and real learning.

Office space: We spend $0.75-1.00 per square foot (including heat, electric, trash, parking…);  I would not want to live here, but working here is great. Cheap rent means lots of square footage.

Spring kills: It’s not the winter that kills people/companies, it is the spring. The claws come out when there is two cents to go around and people thought they were owed five cents.

Coffee: Buy a random guy in a suit a cup of joe (make a point of buying it). When you meet people, if you can afford it, buy the bloody coffee. Small things will make the pain bearable.

Get stuff done: In conclusion, if you are not working on stuff now, when the recovery comes you will be behind the eight-ball. Figure out what you can do and do it. Don’t kill yourself, but do stuff EVERY DAY, even if you are not going to get paid for it.