“Not only did follow-up drilling at Carrickittle yield impressive high-grade mineralization over significant widths, but, even more importantly, we have now determined the true orientation of the high-grade massive sulphide lenses,” stated Bart Jaworski, CEO. “This provides us with a powerful template for tracing mineralization further along strike at Zone 1 and for future drilling at Zones 2, 3 and 4, immediately to the southwest at Carrickittle.”

Eight holes totalling 769 metres were completed as part of Phase 1 of follow-up drilling at Carrickittle (see Exhibit 2, 4 and 10). All but one hole intersected meaningful zinc-lead mineralization.

Phase 1 drill results were also noteworthy due to the presence of locally elevated copper and silver within the mineralized zones. The highest copper intersected was 0.60% copper over 0.24 metres in G11-2840-09, within the wider 7.20 metre interval (described above) which averaged 0.12% copper. In terms of silver, G11-2840-11 returned a high-grade interval of 736 g/t silver over 1.00 metres. An additional assay of the original sample submitted to the lab was carried out as a check and returned 810 g/t Ag.

Phase 1 drill results, coupled with historic intercepts, now clearly indicate two parallel bodies of massive sulphide and vein-hosted mineralization (‘Main Lens‘ and ‘Lens Two‘ on section A-A’ and B-B’, respectively, in Exhibit 4) striking in a north-west orientation, with a currently-drilled strike length of over 100 metres each, a down-dip extent of approximately 10-30 metres each and a true thickness of approximately 3-7 metres and 1-3 metres, respectively.

The mineralized lenses plunge (deepen) towards the northwest (see Exhibit 5 and 6) and dip (are tilted) sub-vertically (see Exhibit 7 and 8). Looking end-on, the lenses can be generally described as having thicker, generally flat-lying mineralization (commonly massive sulphide consisting of sphalerite, galena and pyrite) near the base, with lower grade and narrower vein-hosted mineralization (generally sub-vertical and striking north-west) near the top of the mineralized zone.

It is interpreted that mineralization in G11-2840-11 and G11-2840-12 likely intersected the thinner top of the mineralized zone and that a thicker zone of mineralization may occur directly below these intercepts.

In addition to variability of thickness in a vertical direction, there also appears to be variability along strike.  Given its higher level of drilling and pierce points, the Main Lens exhibits this variability most prominently. Two wider zones appear to be connected by a narrower zone (i.e. exhibiting a possible pinch and swell geometry; see Exhibit 4).

Given the above geometric variability, the task of determining a true width is in some cases quite difficult. An example of this is G11-2840-10 (see Exhibit 6), where true width may range from 80% to 100% or lower, based on the shape of the zone assumed.

Both the Main Lens and Lens Two remain open for expansion along strike to the northwest, whereas, Lens Two is also open, albeit to a limited degree, to the southeast (see Exhibit 6). An area of particular interest on Lens Two is where the zone shallows towards surface and is interpreted to approach the apex of the intrusive dyke.

The above cross-section (Exhibit 7) shows Group Eleven’s drilling which suggests (at least on this section) that the Main Lens and Lens Two are not connected (see G11-2840-08 and G11-2840-10). This section also shows the irregular shape of the lenses, its sub-vertical component and the fact the lenses tend to be thickest at the base and narrowest at the top. The mineralized bodies are spatially associated with inferred fault structures. Local intrusive activity (dykes) is also likely fault controlled. There appears potential to extend Lens Two (eastern-most) towards the east with further drilling.

The above section (Exhibit 8) shows the strongest intercept within the entire Phase 1 follow-up program (see G11-2840-09). Close proximity to the intrusive dyke is noted, along with a historic intercept of 0.8 metres of 8.3% zinc and lead within the dyke.

Next Steps and Outlook

Overall, Phase 1 follow-up drilling at Carrickittle has been successful in vastly increasing the Company’s understanding of the extent and nature of mineralization at Carrickittle. Specifically, drilling has demonstrated continuity of mineralization and shown the orientation of the mineralized trends. This information will be invaluable for further exploration at Zone 1, as well as, the start of modern exploration at Zones 2, 3 and 4 (see Exhibit 9), where impressive historic intercepts have not been re-visited since the mid-1960s. Further close-spaced drilling at Carrickittle is strongly warranted.

Drill-core samples were prepared and assayed in the ALS Minerals Laboratory in Loughrea, Ireland. Samples were fine-crushed (CRU-31) to 70% < 2mm and pulverized and riffle-split to 85% < 75 µm. Zinc, lead and silver assays were obtained by multi-acid (4-acid) digestion/ICP-MS Package (48 Elements), with ore-grade samples. Analytical accuracy and precision are monitored by the submission of four standards and four blanks inserted into the sample train of 108 samples by Group Eleven personnel. No duplicate samples were sent to the lab. ALS analysed twenty-five blanks, fifteen duplicates and sixty-eight standards as part of their internal QC procedures. 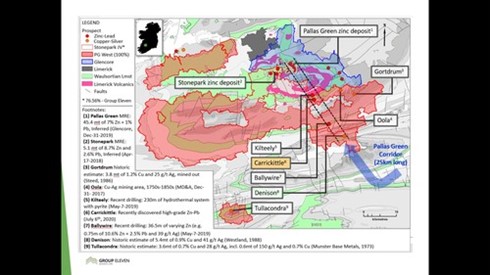 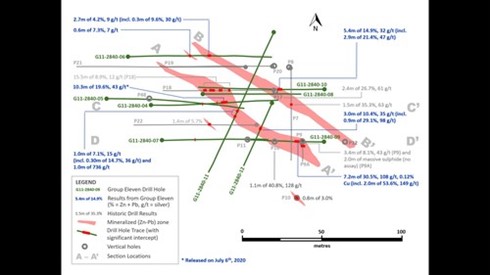 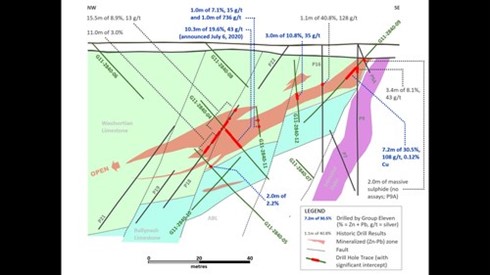 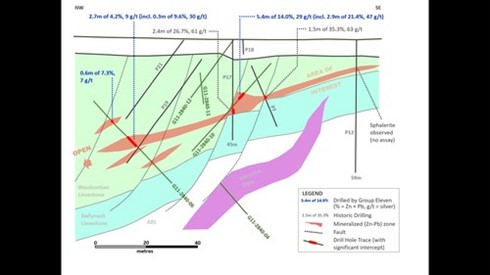 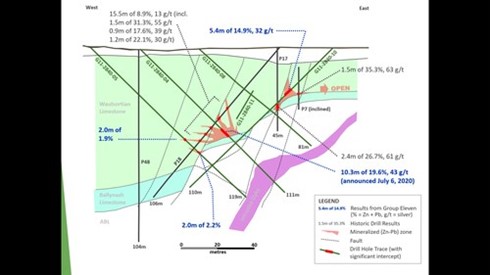 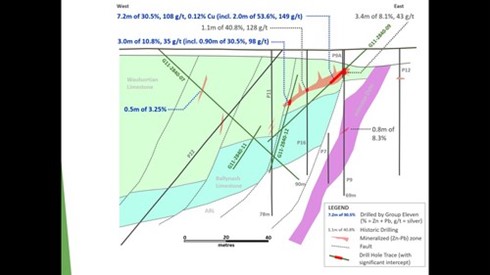 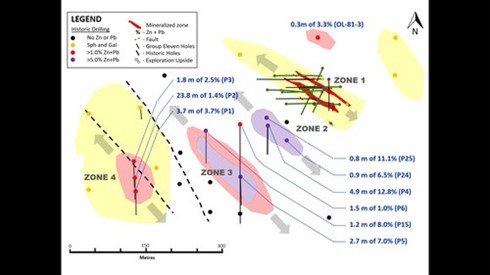