Group Eleven Resources Corp. (TSX-V: ZNG) (OTC: GRLVF) (FRA: 3GE) is pleased to announce that a recent 220-metre step-out hole drilled at the Ballywire zinc prospect at its 100%-owned PG West project, Ireland, intersected 3.30 metres of 13.6% zinc-equivalent within a wider (>36-metre) mineralized intercept. This hole represents by far the best results to date at Ballywire and suggests immediate exploration potential over several kilometres in all directions, most notably to the north and west.

“This is a significant breakthrough in the Company’s comprehensive search for a new zinc deposit in Ireland,” stated Bart Jaworski, CEO. “The above results demonstrate that significant mineralization exists at Ballywire and that scant historic drilling which managed to intersect mineralization, could now be interpreted as potentially being on the margins of a larger, more robust system. Mineralization is now consistently observed over 900 metres down-dip and is open in all directions. The next nearest hole testing the target horizon is located one kilometre to the WNW of today’s intercept and is strongly mineralized. This suggests a very prospective intervening area towards the shallowest part of the system. Today’s results catapult Ballywire into the same league as our Carrickittle prospect in terms of exploration potential, warranting immediate follow-up.”

The above intercept was hosted within a wider, lower-grade interval totalling 36.65 metres of 1.75% ZnEq, including 7.07 metres of 6.76% ZnEq (see Exhibit 2). The wider interval starts 33.25 metres above the base of the Waulsortian limestone and extends 3.40 metres below the base.

Five historic holes to the immediate west of the above were drilled over a number of years (from 1973 to 2000), but each encountered poor ground conditions and was not successful in reaching the target horizon. Hence, this area remains prospective and untested. Two holes further to the west and NW (97-468-2 and 98-468-3) were successful in reaching the target horizon and attained significant mineralization – most notably 97-468-2 which intersected 2.5 metres of 6.2% ZnEq (incl. 0.50 metres of 20.3% ZnEq) (see Exhibit 3, 4 and 5). The vicinity of this area, especially towards G11-468-1, is now deemed very prospective and warrants immediate follow-up. 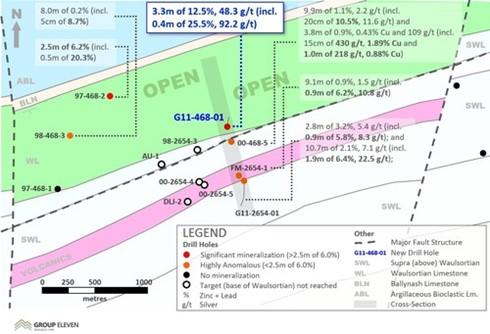 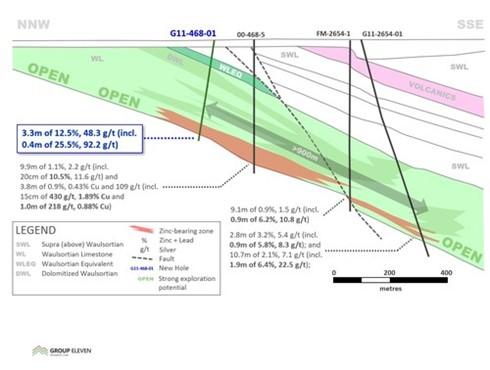 Location and Importance of Rathdowney Trend

Ballywire is located at the Company’s 100%-owned PG West project (“PG West”), within the Limerick region of south-western Ireland and is situated at the intersection of the Pallas Green Corridor (NW-oriented) and the Rathdowney Trend (WSW-oriented; (see Exhibit 6). The Rathdowney Trend hosts the Lisheen1 and Galmoy2 zinc mines (both mined out in 2015 and 2012, respectively), located approximately 55 km and 65 kilometres towards the NE along trend from Ballywire. 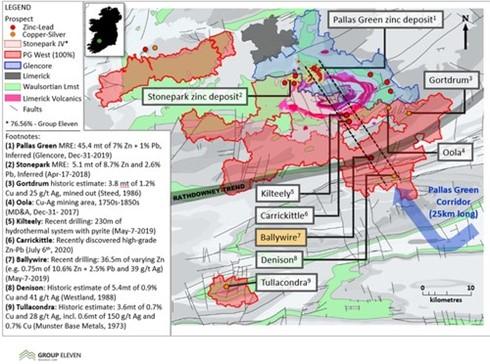 Update on Carrickittle and Other Exploration

Drilling and the ground magnetic survey at Carrickittle are progressing on schedule. The Company aims to provide an update on Carrickittle over the coming few weeks. Drilling at Oola and Denison (both at PG West) is now complete with results to be published upon receipt of assays and geological interpretation.

Drill-core samples were prepared and assayed in the ALS Minerals Laboratory in Loughrea, Ireland. Samples were fine-crushed (CRU-31) to 70% < 2mm and pulverized and riffle-split to 85% < 75 µm. Zinc, lead and silver assays were obtained by multi-acid (4-acid) digestion/ICP-MS Package (48 Elements), with ore-grade samples analysed using multi-acid ICP-AES. Analytical accuracy and precision are monitored by the submission of 2 standards and 2 blanks inserted into the sample train of 57 samples by Group Eleven personnel. ALS analysed 4 blanks, 7 duplicates and 14 standards as part of their internal QC procedures.