Group Eleven Resources Corp. (TSX-V: ZNG) (OTC: GRLVF) (FRA: 3GE) is pleased to announce it has intersected several massive sulphide intervals at its preliminary drill campaign at Zone 3 and 4 of the Carrickittle prospect within its 100%-owned PG West project, Ireland. These represent the best results to date at Zone 3 and 4, suggesting the mineralizing system remains robust and open over 400m SW of high-grade massive sulphides intersected last year at Zone 1. The Company also announces that drilling has begun at the 1km NW extension at Carrickittle.

“Despite drilling only a fraction of the meterage we completed at Zones 1 and 2, it is encouraging to see multiple intervals of high-grade massive and semi-massive sulphide at Zone 4, over 400m southwest of spectacular grades achieved at Zone 1 last year,” stated Bart Jaworski, CEO. “This suggests a robust system at Carrickittle, which remains wide open to the north-west. We are excited that a drill program up to 4x larger than our last campaign has now started across this exciting target-rich area, over 1km in strike. This next drill phase is informed by powerful exploration vectors which emerged from our recent drill and ground magnetics data, historic holes which intersected high-grade massive sulphide over 500m to the north-west, as well as, prospective circular magnetic features, concentrated on the north side of the NW extension, thought to be related to zinc mineralization.”

The Company’s drill campaign at Zone 3 and 4 was relatively cursory in nature (four holes totalling 518m), compared to more detailed drilling at Zone 1 and 2 (17 holes totalling 1,800m). This reflects a better understanding of the controls on mineralization (derived from drilling at Zone 1 and 2 and determined to be predominantly NW-striking, steeply-dipping to the SW), as well as, the Company’s intention to maximize remaining budgeted drill meterage for the prime target – the 1km NW extension, towards Glencore’s Pallas Green zinc deposit1.

At Zone 3, two holes were drilled (G11-2840-21 and -24) returning anomalous levels of zinc and lead, confirming the NW mineralizing trend at this prospect. Note, hole G11-2840-23 was drilled at the Oola prospect (see news release dated October 18, 2021). A summary of the Company’s drill results from Zone 3 and 4 is shown below (see Exhibit 4); whereas, key historic holes from the area are shown in Exhibit 5.

Overall, the above results suggest the mineralizing system is strongest at Zone 1 and Zone 4, in line with the two most prospective structural corridors identified by the recent ground magnetic survey (see news release dated September 28, 2021). The NW-oriented control on mineralization, now well established at Zones 1 to 4, provides a powerful exploration vector which the Company will now employ (along with historic intercepts of massive sulphide) as it begins to drill along the postulated 1km-long extension immediately NW of Zones 1 and 4.

In addition to the above, circular magnetic features interpreted to represent volcanic intrusives and/or diatremes towards the north (see Exhibit 2 and news release dated September 28, 2021) are thought likely to be related to zinc mineralization – and hence are prospective.

Drill-core samples were prepared and assayed in the ALS Minerals Laboratory in Loughrea, Ireland. Samples were fine-crushed (CRU-31) to 70% < 2mm and pulverized and riffle-split to 85% < 75 µm. Zinc, lead and silver assays were obtained by multi-acid (4-acid) digestion/ICP-MS Package (48 Elements), with ore-grade samples analysed using multi-acid ICP-AES. Analytical accuracy and precision are monitored by the submission of 5 standards and 5 blanks inserted into the sample train of 168 samples by Group Eleven personnel. ALS analysed 10 blanks, 30 duplicates and 38 standards as part of their internal QC procedures. 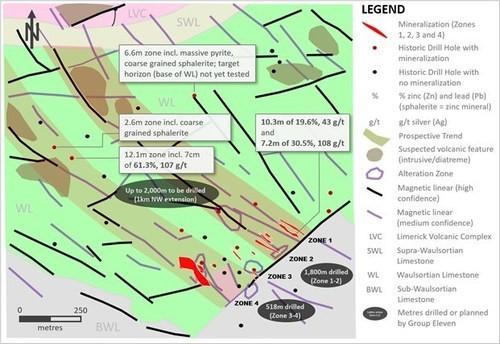 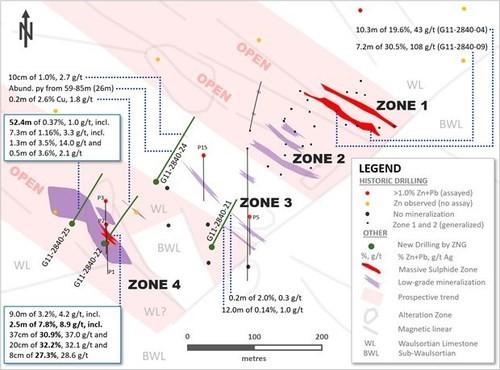