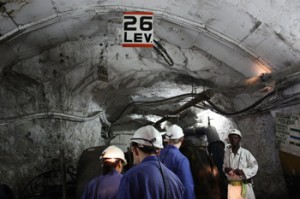 Randgold Resources Limited and AngloGold Ashanti (NYSE: AU) have concluded an investment agreement aimed at the formation of a joint venture to redevelop and operate AngloGold Ashanti’s Obuasi gold mine in Ghana. In terms of the Agreement, Randgold will lead and fund a development plan designed to rebuild Obuasi as a viable long-life mining business with an attractive cost structure and returns.

Obuasi, located in the Ashanti region of Ghana, 320 kilometres northwest of the capital Accra, is a large, high-grade deposit with proven and probable ore reserves (as reported by AngloGold Ashanti in their 2014 Annual Report) of 24.53Mt at 6.70g/t for 5.29Moz, part of a substantial mineral resource base. In 2012, AngloGold Ashanti initiated a programme to modernise the mine, principally by starting to develop a ramp access that will ultimately run from surface to high-grade blocks of ore underground. The ramp will supplement current vertical hoisting infrastructure and help debottleneck the underground operation by allowing for greater ease in transporting people and materials underground, and transporting ore to surface. This is a necessary step ahead of the envisaged transformation of the mine into a modern, mechanised operation.

At the end of 2014, AngloGold Ashanti converted Obuasi to limited operations, ceasing underground production, retrenching the workforce, but continuing to process tailings and starting a feasibility study on the redevelopment of the mine. Development of the decline ramp has continued over this period.

The development plan will build on this feasibility study with the intention of establishing a more focused, efficient, mechanised high-grade operation, and is expected to take about four months to complete. If the development plan meets both parties’ investment criteria, and assuming all other conditions are satisfied, Randgold and AngloGold Ashanti will form a new joint venture company.

Randgold and AngloGold Ashanti will then be jointly responsible for funding the redevelopment of Obuasi in line with the agreed development plan. A Randgold group entity will be appointed as operator of the mine, and Randgold and AngloGold Ashanti will appoint an equal number of directors to the board of the joint venture company, with board and shareholder decisions to be approved by both parties.

Randgold chief executive Mark Bristow said, “Obuasi is a world-class resource. We now have to see if we can convert it into a world-class mine. We have a long history of cooperation with AngloGold Ashanti and we look forward to working with them again on charting a new course towards a viable future for Obuasi.”

“AngloGold Ashanti has since 2012 effected a range of improvements to modernise Obuasi and — in line with its strategy — has progressed a feasibility study as the critical next step toward breathing new life into this important mine,” AngloGold Ashanti CEO Srinivasan Venkatakrishnan said. “Our partnership with Randgold has proved successful for well over a decade in bringing value from sustainable gold mining to all stakeholders and we believe that pooling the extensive expertise and the capital of these two companies will improve our ability to bring Obuasi’s world-class high-grade gold deposit to account.”


Randgold is expected to deliver the new development plan to both parties’ boards by 31 January 2016. Formation of the joint venture is conditional on the satisfaction of a number of conditions, which include the approval by the boards of Randgold and AngloGold Ashanti of the final development plan prepared by Randgold, approval of the transaction by the South African Reserve Bank consent of the lending banks under certain existing financing agreements of AngloGold Ashanti, completion by Randgold of due diligence to its satisfaction and receipt of any applicable anti-trust approvals. SARB approval is required to be obtained within 45 days from the date of the Agreement, and AngloGold Ashanti’s financing consent within 60 days, with the other Initial Conditions to be satisfied by 19 February 2016

In addition, formation of the joint venture is conditional on the receipt of the approvals necessary for the implementation of the development plan and formation of the joint venture from the Government of Ghana on terms acceptable to the parties, including agreement of a revised stability agreement and a development agreement reflecting the agreed development plan and their ratification by the Parliament of Ghana and the issue of all necessary environmental licences and permits for the project (the “Government of Ghana Conditions”), which are planned to be satisfied by 31 March 2016. Subject to the transaction completing, Randgold and AngloGold Ashanti will each fund their pro rata share of the agreed costs incurred in implementing the development plan from the Approval Date and certain other agreed costs from the date of the Agreement. Randgold will also assume responsibility for its proportionate share of certain liabilities arising under guarantees given by AngloGold Ashanti in relation to the liabilities of its Ghanaian subsidiaries.

Under the terms of the Agreement, the Iduapriem mine, and certain other non-core assets, will be retained under the sole ownership of AngloGold Ashanti.

AngloGold Ashanti produced 4.4 million ounces of gold in 2014, generating US$5.2 billion in gold income, utilising US$1.2 billion in capital expenditure. All-in sustaining costs, which capture direct operating costs and sustaining capital, as well as corporate overheads and exploration, fell 13% to US$1,026 per ounce in 2014 compared with US$1,174 per ounce in 2013. All-in costs, which also include capital expenditure on projects, fell 22% over the same period, to US$1,148 per ounce from US$1,466 per ounce the previous year. These production, capital expenditure and operating costs cost figures include CC&V. As at 31 December 2014 (before the sale of CC&V) AngloGold Ashanti had an attributable Ore Reserve of 57.5 million ounces of gold and an attributable Mineral Resource of 232.0 million ounces of gold. For the year ended 31 December 2014 incurred interest costs of US$278 million.

At the end of the second quarter of 2015, AngloGold Ashanti’s Net Debt was $3.076bn. Debt levels remain well below the covenant of net debt to adjusted EBITDA of 3.5 times and will decline to 1.5 times following the receipt of the cash proceeds on the disposal of CC&V post the quarter end. The net debt and net debt to adjusted EBITDA ratio at 30 June 2015, including the CC&V gross proceeds of $819.4m (which factored in estimated closing adjustments) and estimated transaction costs of $12m, reduces on a pro forma basis respectively from $3,076m to $2,269m, and from 1.95 to 1.44 times.