Great Bear Resources (TSX-V: GBR) today announced results from the first 5 drill holes of its Phase 2 drill program at its Dixie project in the Red Lake district of Ontario. A total of 15 holes were drilled along 2.3 kilometres strike length of a prospective geological contact, testing both new and existing gold targets. All holes hit the hydrothermal alteration system which is characterized by varying silicification, sulphide mineralization and gold content. Drilling will recommence in June 2018.

Highlights from the first five drill holes include:

Chris Taylor, CEO of Great Bear commented, “Our Phase 2 drilling was ambitiously designed to test the size potential of the Dixie gold system at shallow depths and along strike, plus a number of new gold targets. It was successful on all fronts. Our drilling has revealed a regionally-significant gold-bearing hydrothermal system which has now been drilled along more than 2 kilometres of a favourable geological contact. The system contains multiple drill-confirmed high-grade gold zones comparable in width and grade to mined deposits in Red Lake, all of which are open to extension. Historical drilling and geophysics suggest that the primary gold-bearing contact may extend for up to 10 kilometres on the property. The remaining 7,000 metres of the Phase 2 drill program will include further step-out holes along this contact, and follow-up delineation drilling of areas with high-grade gold intercepts at depth.”

Table 1: Drill intercept highlights from the first 5 of 15 drill holes completed during initial Phase 2 drilling. All interval lengths are drill indicated and may not represent true thicknesses.

DHZ-001 and DHZ-002 are the first holes drilled into the Hinge Zone by Great Bear. They intersected quartz veins with strong peripheral biotite alteration and both contained high-grade intervals with visible gold.

This combination of hydrothermal biotite alteration with quartz vein-hosted high-grade visible gold also occurs at the High Grade Zone at the Red Lake gold mine operated by Goldcorp (TSX: G). The intercepts in the two Hinge Zone holes are 75 metres apart (vertically) and remain open for follow-up drilling.

High-grade gold mineralization was encountered in drill hole DL-009 at the contact between a rhyolite and tholeiitic basalt, and occurs approximately 80 meters above (in the hanging wall) of the primary Dixie Limb contact. Significant visible gold is observed which returned 30.20 g/t gold over 0.5 metres, within a broader interval of 2.59 g/t gold over 7.40 metres. Several historical holes intersected the same contact (according to historical drill log descriptions), however not all of the intervals were assayed for gold by past explorers. The Company will continue to explore this zone and test other possible parallel gold zones.

Figure 1: Drill plan showing locations of first 15 holes of the 2018 drill program. Sub-zones within the Dixie gold system are labeled 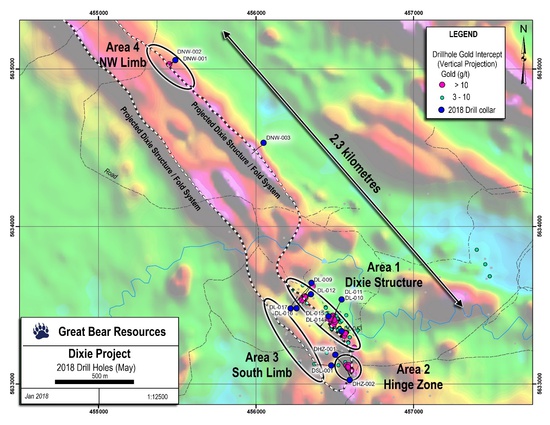 Hole DSL-001 is the first hole drilled by Great Bear into the interpreted South Limb of an apparent folded duplication of the main Dixie Limb, as shown on Figure 1. Observations of a wide silicified and sulphide-gold bearing interval in DSL-001 suggests that the Dixie hydrothermal system may be wider in this area, and that significant gold potential exists at South Limb.

The Company is awaiting assays from 10 additional drill holes. These include step out holes along the primary Dixie Limb contact that increase its drilled strike length from approximately 500 metres to 2.3 kilometres, and additional drill holes into the main Dixie Limb within the primary drill area. Results are expected to be received over the next four weeks, and will be released in batches as processed. The Company expects to be drilling again during June.

Great Bear is earning a 100% royalty-free interest in the Dixie property which consists of 7,106 hectares in the Red Lake district covering a drill and geophysically defined multi-kilometre gold mineralized structure similar to that hosting other producing gold mines in the district. The project has seen over 160 drill holes to-date and has yielded high grade near-surface gold results including 10.40 m of 16.84 g/t gold. In addition, Great Bear is also earning a 100% royalty-free interest in its West Madsen properties which total 2,725 hectares and are contiguous with Pure Gold Mining Inc.’s (TSX-V: PGM) Madsen property. All of Great Bear’s Red Lake projects are accessible year-round through existing roads.

Mr. R. Bob Singh, P.Geo, Director and VP Exploration for Great Bear, is the Qualified Person as defined by National Instrument 43-101 responsible for the accuracy of technical information contained in this news release.