Highlights of the new SLZ discovery include:

Highlights of drilling within the DLZ include:

Chris Taylor, President and CEO of Great Bear said, “We have made another exciting near-surface high-grade gold discovery in a new area of our Dixie project. At our South Limb Zone discovery, gold occurs within an up-to 40-metre-wide series of parallel quartz veins that follow a regional northwest to southeast trending D2 fold axis. The Hinge Zone also occurs adjacent to this fold axis. D2 folds are also important high-grade controls at the main Red Lake mine, and at other mines in the district. This new target has potential for several kilometres of strike length, and is one of several D2 folds at the Dixie project. We will continue with step-out and down-dip drilling along this new discovery to determine its extent. The Dixie Limb Zone also continues to yield exceptionally consistent gold results as we drill to define mineralization in the area.”

In addition to drilling of the SLZ and DLZ, a geological drill hole, DHZ-005, was completed 100 metres to the southeast of the Hinge Zone to test the orientation of the regional D2 fold axis. It remained in the footwall basalt unit over its entire core length of 252 metres and intersected a new interval of 1.40 metres of 1.17 g/t gold at 197 metres depth. Structural data from oriented drill core were collected that will be used to plan upcoming follow-up drill holes into the Hinge Zone and SLZ.

Figure 1: Map of current drill locations, showing the new SLZ discovery, the DLZ and the Hinge Zone. The locations of two regional D2 fold axes are shown as defined by drilling and as inferred from geophysics. 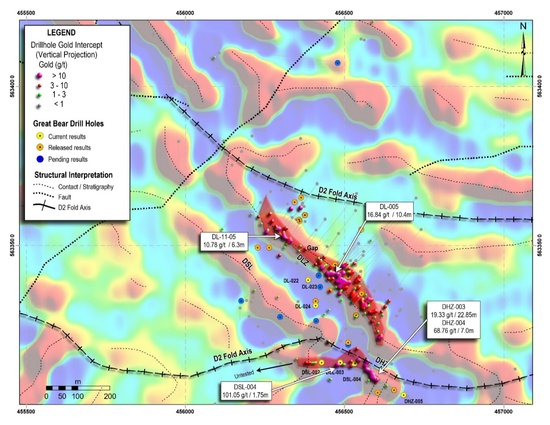 The Company is currently completing a down-hole gyroscopic resurvey of a number of Great Bear’s and other historical drill holes, in order to accurately model the three-dimensional geometry of the various mineralized zones that it is exploring.

The Company’s new 30,000 metre, 150 drill hole drill program is now underway, and is expected to continue drilling through 2018 and 2019. Targets to be drilled include the Hinge Zone, SLZ and DLZ, as well as a number of newly defined, highly prospective geological and structural targets across the project. Results will continue to be released in batches as received.

Highlights of all of Great Bear’s drill results can be viewed at the Company’s web site at www.greatbearresources.ca.

Table 2: Current drill results from the Dixie Limb Zone, testing from surface to 241 vertical metres depth. All widths are drill indicated as insufficient drilling has been completed to define true thickness. 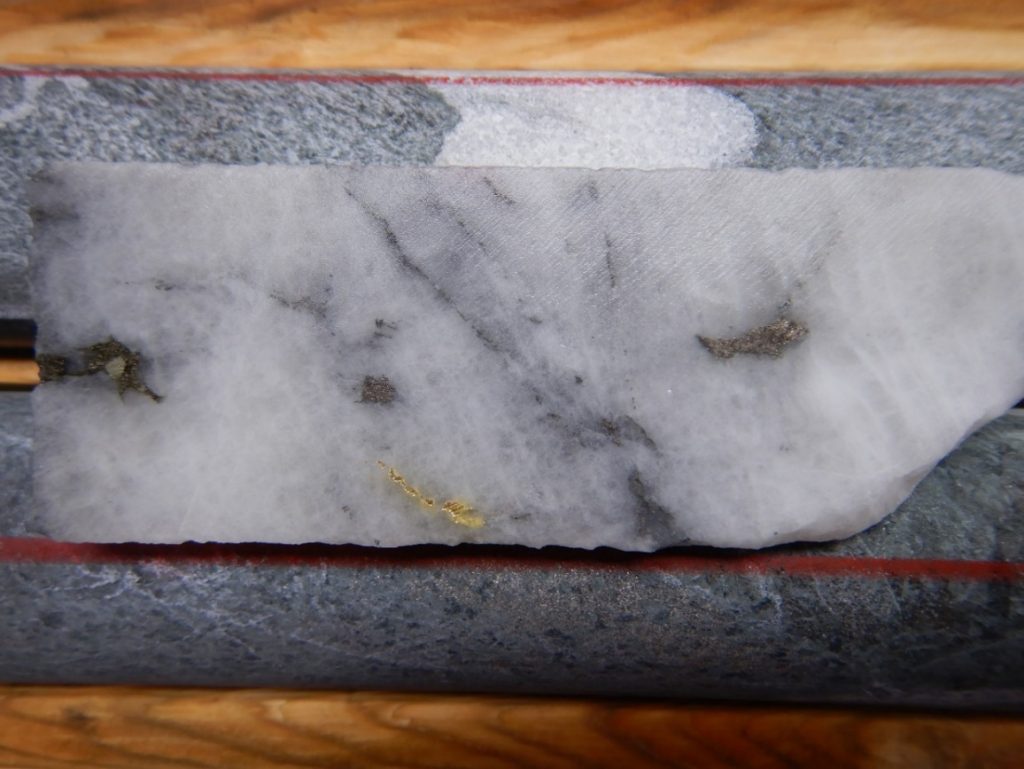 Great Bear is earning a 100% royalty-free interest in the Dixie property for remaining payments totaling $110,000 over three years. The property consists of 9,140 hectares located approximately 15 minutes’ drive along Highway 105 from downtown Red Lake, Ontario. The Red Lake mining district has produced over 30,000,000 ounces of gold and is one of the premier mining districts in Canada, benefitting from major active mining operations including the Red Lake Gold Mine of Goldcorp Inc., plus modern infrastructure and a skilled workforce. The Dixie property covers a drill and geophysically defined multi-kilometre gold mineralized structure similar to that hosting other producing gold mines in the district. The project has seen over 200 drill holes to-date and has yielded high grade near-surface gold results from several gold zones hosted at an extensive mineralized geological contact — the Dixie Limb Zone. In addition, Great Bear is also earning a 100% royalty-free interest in its West Madsen properties which total 3,860 hectares and are contiguous with Pure Gold Mining Inc.’s Madsen property. All of Great Bear’s Red Lake projects are accessible year-round through existing roads.

Drill core is logged and sampled in a secure core storage facility located in Red Lake Ontario.  Core samples from the program are cut in half, using a diamond cutting saw, and are sent to Activation Laboratories Ltd. in Ancaster Ontario, and SGS Canada Inc. in Red Lake, Ontario, both of which are accredited mineral analysis laboratories, for analysis. All samples are analysed for gold using standard Fire Assay-AA techniques. Samples returning over 3.0 g/t gold are analysed utilizing standard Fire Assay-Gravimetric methods. Certified gold reference standards, blanks and field duplicates are routinely inserted into the sample stream, as part of Great Bear’s quality control/quality assurance program. No QAQC issues were noted with the results reported herein.

Mr. R. Bob Singh, P.Geo, Director and VP Exploration for Great Bear, is the Qualified Person as defined by National Instrument 43-101 responsible for the accuracy of technical information contained in this news release.