Chris Taylor, President and CEO of Great Bear said, “Our second deep drill hole at Dixie has more than doubled the depth of the Hinge zone to over 850 vertical metres.  The deep intercept demonstrates the significant expansion potential of the Dixie Project at depth.  While our drilling remains mostly focused on the larger LP Fault zone, we believe the Hinge and Dixie Limb zones have comparable potential to other successful “Red Lake style” projects in the district.  To expand on this potential, we plan to add additional drills in 2021 that will be focused on the Hinge and Dixie Limb zones, while the current five drills remain focused on the LP Fault.”

*True widths are 90% of interval widths based on intersection points of the drill hole intercept with the geological model and oriented drill core data. Interval widths are calculated using a 0.10 g/t gold cut-off grade with up to 3 m of internal dilution of zero grade.

BR-074 intersected one of the widest occurrences of locally gold-bearing quartz veins observed at the Dixie project to-date.  Multiple quartz veins with minor carbonate veining were intersected over more than 130 metres of drill length from approximately 1,122 to 1,258 metres down hole.  Visible gold was noted in 2 locations, with the interval from 1,165.50 to 1,166.00 assaying 2.53 g/t.  At the Dixie Project, this type of widespread veining and alteration helps identify the overall hydrothermal footprint of the gold mineralizing system and provides key targets for follow-up drilling.  Figure 6.

Further regional drilling will be undertaken in this area to determine if significant gold mineralization is present where this large new vein swarm intersects various geological contacts and structures.  The new vein zone may also be an on-strike continuation of the Hinge zone.

The Company also announces its intention to expand its current drill program by an additional 100,000 metres in 2021.  The Company currently has approximately $41 million in cash and the expanded program is expected to cost approximately $25 million through the end of 2021.

Great Bear has been operating with 3 to 5 drill rigs throughout 2020, with approximately 25,000 metres drilled per fiscal quarter.  The Company recently acquired a larger additional core logging facility located in the town of Red Lake and plans to increase the number of drill rigs during 2021.

Additional drills will be largely used to expand and define the mineralized zones at the Hinge and Dixie Limb zones, while the current five drill rigs remain focused on the larger LP Fault target.  The additional drills may also be used at various times throughout the calendar year to drill other regional targets at the Dixie Project, and/or at Great Bear’s other Red Lake area properties.

Drill collar location, azimuth and dip for drill holes included in this release are provided in the table below:

About the Dixie Project

The Dixie Project is 100% owned, comprised of 9,140 hectares of contiguous claims that extend over 22 kilometres, and is located approximately 25 kilometres southeast of the town of Red Lake, Ontario. The project is accessible year-round via a 15 minute drive on a paved highway which runs the length of the northern claim boundary and a network of well-maintained logging roads.

Drill core is logged and sampled in a secure core storage facility located in Red Lake Ontario.  Core samples from the program are cut in half, using a diamond cutting saw, and are sent to Activation Laboratories in Ontario, an accredited mineral analysis laboratory, for analysis. All samples are analysed for gold using standard Fire Assay-AA techniques. Samples returning over 10.0 g/t gold are analysed utilizing standard Fire Assay-Gravimetric methods.  Pulps from approximately 5% of the gold mineralized samples are submitted for check analysis to a second lab.  Selected samples are also chosen for duplicate assay from the coarse reject of the original sample.  Selected samples with visible gold are also analyzed with a standard 1 kg metallic screen fire assay.  Certified gold reference standards, blanks and field duplicates are routinely inserted into the sample stream, as part of Great Bear’s quality control/quality assurance program.  No QAQC issues were noted with the results reported herein. 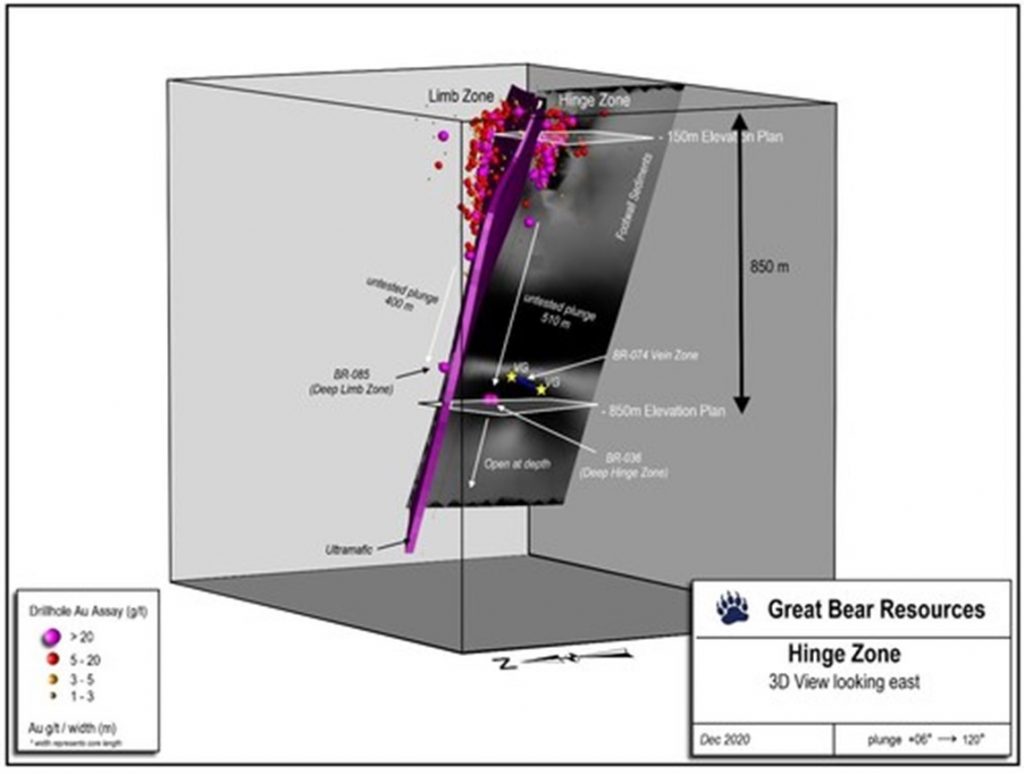 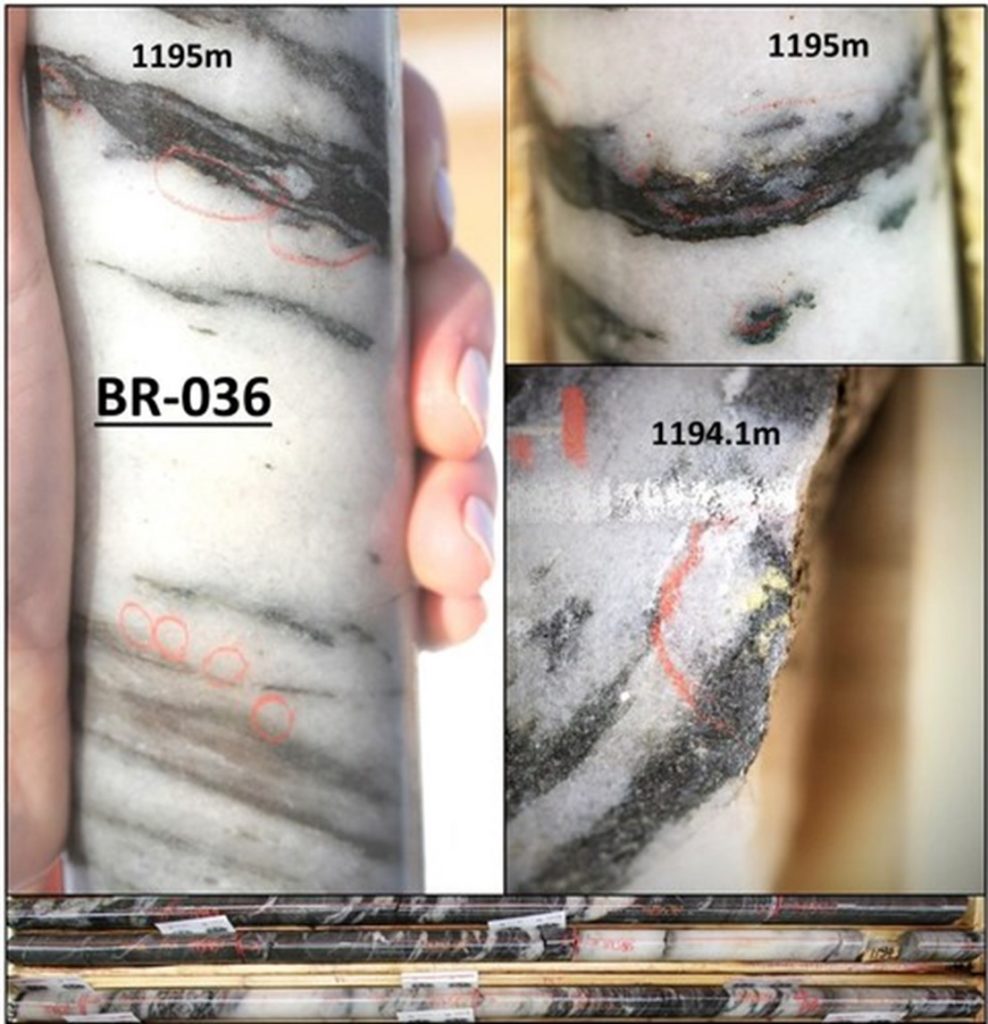 Figure 2: Image of gold mineralization from the deep Hinge zone in BR-036, at approximately 850 metres vertical depth. Mineralization depicted in this image is from a selective interval assaying 28.86 g/t gold over 2.25 metres and is not necessarily indicative of mineralization on the property (CNW Group/Great Bear Resources Ltd.) 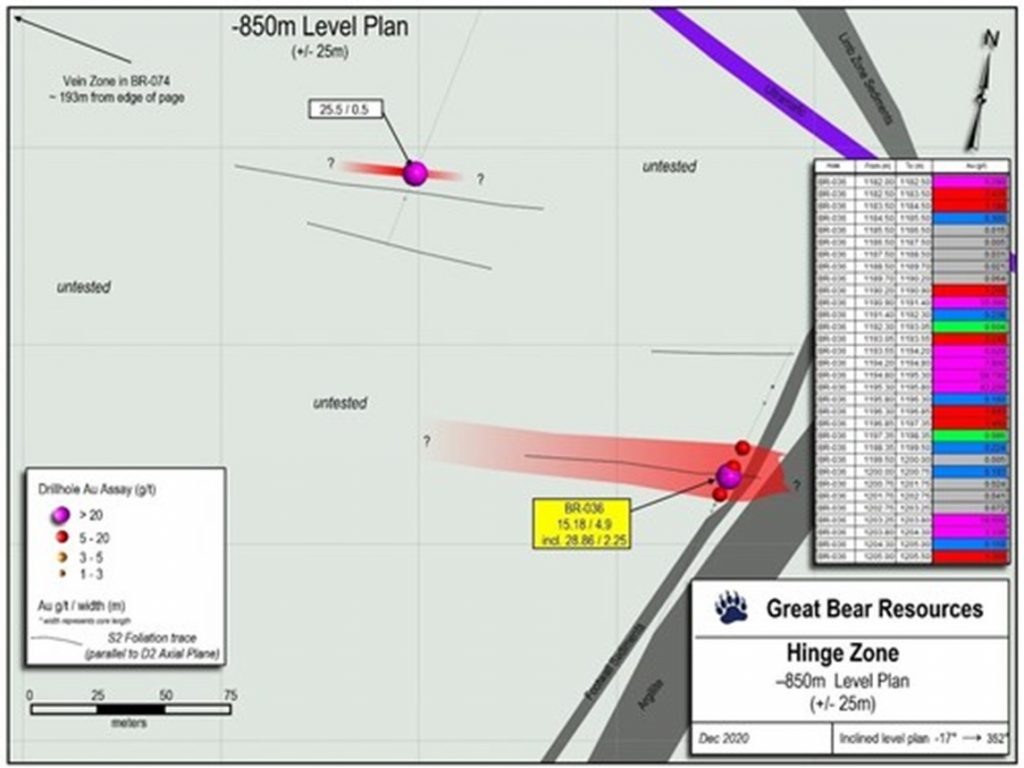 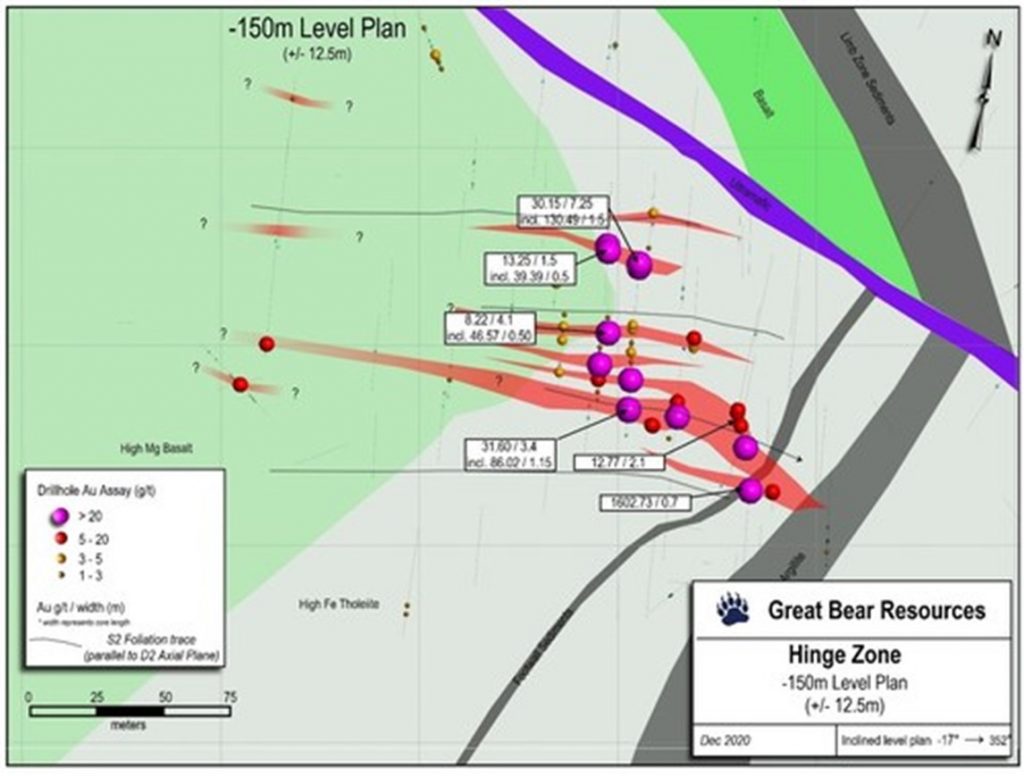 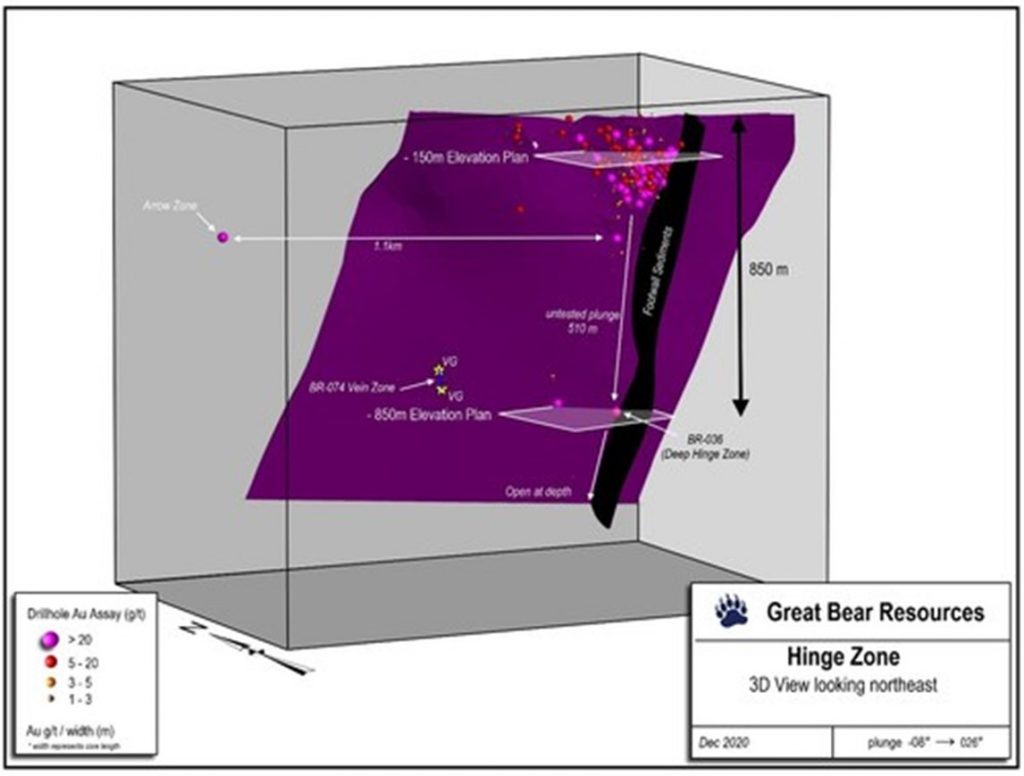 Figure 5: 3D long section of the Hinge zone showing the neighbouring Arrow zone 1,100 metres to the northwest, the location of the deep Hinge zone intercepts in BR-036, and the new vein zone in BR-074. (CNW Group/Great Bear Resources Ltd.) 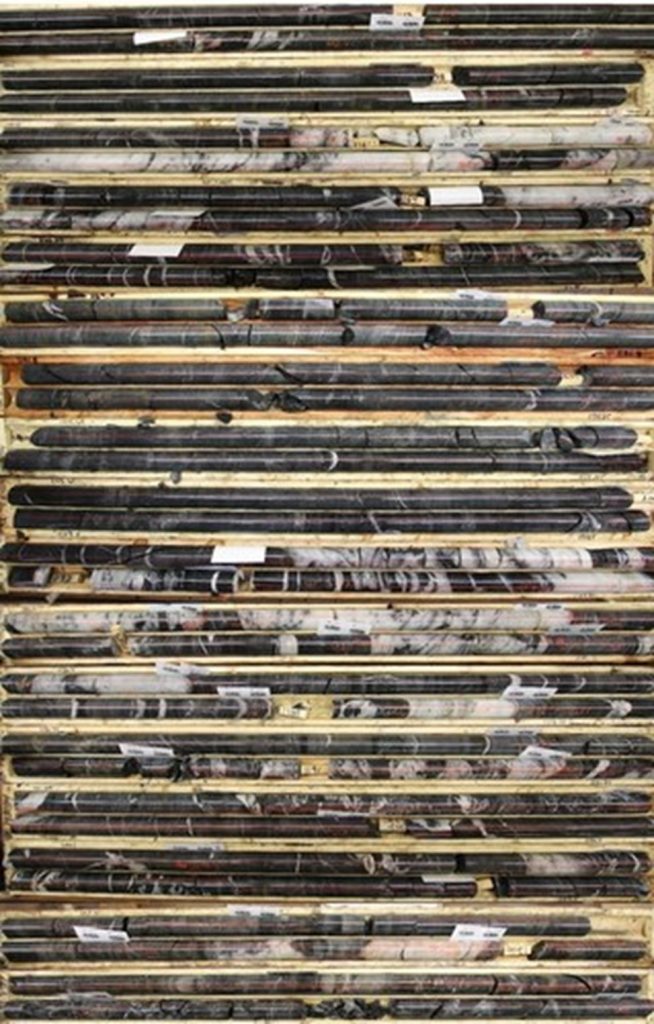 Figure 6: Image of new vein zone in BR-074 showing drill core from approximately 1150 to 1200 metres. This new vein zone was intersected at depth between the Hinge and Arrow zones. It contains minor visible gold, and will be further explored with additional drilling. Mineralization depicted in this image is from a selective interval and is not necessarily indicative of mineralization on the property. (CNW Group/Great Bear Resources Ltd.)