Chris Taylor, President and CEO of Great Bear said, “In a district where gold is usually mined from discontinuous veins averaging a few metres in width, often at kilometre-scale depths, the near-surface, multi-kilometre extent of our LP Fault discovery instead resembles other Archean-age gold deposits across Ontario and Quebec. We continue to intersect high-grade gold intervals with comparable widths and grades to what have been mined at the major high-grade deposits in Red Lake, however these occur within wide envelopes of moderate to low grade gold mineralization, which we observe projecting to surface. During September and October, mapping crews discovered outcrop exposures of our felsic target geology, similar to what we’re drilling from Bear-Rimini to Auro, along approximately 15 kilometres of strike length. We have also now drilled the same units one kilometre to the southeast of the Auro zone, with assays pending, and through examination of historical drill core we see that Noranda in 1993, drilled similar rocks 8 kilometres to the southeast of the Auro zone.”

Great Bear is fully funded with approximately $17m in cash, and $27m on a fully diluted basis. The Company plans to continue drilling along strike of the LP Fault in generally 100 metre to 1 kilometre step-outs, with additional drilling at Dixie Limb and Hinge Zones through the remainder of 2019 and throughout 2020.

Table 2: Most recent drill results from along the LP Fault. Drill results are spaced along 1.6 kilometres of strike length as shown with included section numbers.

* Widths are drill indicated core length, as insufficient drilling has been undertaken to determine true widths at this time. Average grades are calculated with un-capped gold assays, as insufficient drilling has been completed to determine capping levels for higher grade gold intercepts. Average widths are calculated using a 0.10 g/t gold cut-off grade with < 3 m of internal dilution of zero grade.

The LP fault represents a major break/deformation zone between felsic and mafic volcanic rocks and is associated with significant gold-bearing alteration. It is similar in character to other large gold-hosting deformation zones in Archean greenstone belts. Well-known Canadian examples include the Larder Lake Cadillac Break that extends through Kirkland Lake and Val D’Or, the Porcupine Destor Fault Zone of the Timmins Camp, the Detour Lake Fault Zone, the Pike Fault in the Meliadine camp of Nunavut, and the Cochenour-Gullrock deformation zone of the Red Lake Mine complex.

A 2,100 sample SGH survey was conducted during summer 2019 along the LP Fault and North Fault in the Bear-Rimini to Auro area, as originally disclosed on August 1, 2019. An earlier, smaller test survey at the Hinge and Dixie Limb Zones had successfully identified the surface projection of portions of both of those zones.

As was also the case at the Hinge and Dixie Limb Zones, many areas of the LP Fault where Great Bear has successfully intersected gold mineralization in underlying bedrock, including the discovery drill holes at Bear-Rimini, Yuma and Auro, were not detected by the SGH survey. As such, areas without SGH targets cannot be excluded from planned drilling, however the SGH targets can be utilized to help prioritize drill order, and have the potential to lead to new discoveries in areas that might not otherwise be drilled.

The Company also completed a series 7 drill holes testing other drill targets. Drill holes BR-011a, 13, 14, 15, 16 and 17 tested areas north of the LP Fault. Structural deformation related to the LP Fault is mostly absent in these drill holes, along with the associated widespread silica-albite-sulphide mineralization observed in conjunction with gold mineralization elsewhere.

This drilling suggests that the development of significant gold mineralization within the felsic sedimentary and volcanic units requires structural preparation related to the major faults. The North Fault, which is interpreted to parallel to the LP Fault for over 18 kilometres of strike length, and also presents a target on the SGH survey, remains an exploration target that will require direct drill testing.

Drill hole BR-010, located 250 metres to the northwest of the Bear-Rimini Zone along the LP Fault on section 22700 intersected various minor intervals of gold mineralization along 259.50 metres of core length, including 10.47 g/t gold over 0.50 metres, 1.18 g/t gold over 6.00 metres, and 0.23 g/t gold over 17.00 metres. Key felsic volcanic marker units observed at Bear-Rimini, Yuma and Auro were absent in this area, and gold mineralization is less well developed than where these marker units are present further to the southeast.

Of note, the missing marker units were subsequently identified by Great Bear’s mapping crews in outcrop approximately 750 metres to the northwest of BR-010, further along strike of the LP Fault, as shown on Figure 1. The Company will follow up with drilling in this area during the winter program.

High resolution airborne geophysics completed by Great Bear in 2017 also suggests parallel structures to the LP Fault and North Fault may be present between the two structures. These will also be drill tested during the winter drill program.

Great Bear will continue to provide regular drill program updates throughout the remainder of 2019 and through 2020. Assay results will continue to be released in batches as received and processed. Approximately 26,000 metres of drilling remain to be completed as part of the Company’s ongoing 90,000 metre drill program.

The Company also reports it has granted an aggregate of 35,000 stock options to consultants of the Company, exercisable at $7.68 per share for a period of five years. The options are subject to a four month hold period.

Great Bear’s President and CEO Chris Taylor will appear alongside Rob McEwen, Executive Chairman of McEwen Mining Inc., during a “fireside chat” discussion to be held at the Zurich Precious Metals Summit at 3:45 PM CET (9:45 AM EST) on November 12, 2019.

Chris and Rob will discuss their experiences in the mining industry, the state of the gold market, and other topics. They will be joined by Anthony Vaccaro, Group Publisher of the Northern Miner Group, whose publications include the Northern Miner and Canadian Mining Journal.

The live broadcast can be viewed using the following link, and will also be posted to the summit’s webcast archives:

Great Bear Resources Ltd. is a well-financed company based in Vancouver, Canada, managed by a team with a track record of success in the mineral exploration sector. Great Bear holds a 100% interest, royalty free, in its flagship Dixie property, which is road accessible year-round via Highway 105, a 15 minute drive from downtown Red Lake, Ontario. The Red Lake mining district is one of the premier mining districts in Canada, benefitting from major active mining operations including the Red Lake Gold Mine of Newmont Goldcorp Corp., plus modern infrastructure and a skilled workforce. Production from the Red Lake district does not necessarily reflect the mineralization that may, or may not be hosted on the Company’s Dixie property.

The LP Fault is large a trans-crustal deformation zone that is interpreted to traverse the Dixie property for approximately 18.5 kilometres of strike length and has been drilled along approximately 4 kilometres of strike length to-date. It hosts high-grade gold mineralization that is controlled by structural and geological contacts, and low to moderate grade disseminated gold that surrounds and flanks the high-grade intervals. The dominant gold-hosting stratigraphy consists of felsic sediments and volcanic units.

In addition, Great Bear is also earning a 100% royalty-free interest in the Pakwash, Dedee and Sobel properties, which cover regionally significant gold-controlling structures and prospective geology. All of Great Bear’s Red Lake projects are accessible year-round through existing roads.

Drill core is logged and sampled in a secure core storage facility located in Red Lake Ontario. Core samples from the program are cut in half, using a diamond cutting saw, and are sent to SGS Canada Inc. in Red Lake, Ontario, and Activation Laboratories in Ontario, both of which are accredited mineral analysis laboratories, for analysis. All samples are analysed for gold using standard Fire Assay-AA techniques. Samples returning over 10.0 g/t gold are analysed utilizing standard Fire Assay-Gravimetric methods. Pulps from approximately 5% of the gold mineralized samples are submitted for check analysis to a second lab. Selected samples are also chosen for duplicate assay from the coarse reject of the original sample. Selected samples with visible gold are also analyzed with a standard 1 kg metallic screen fire assay. Certified gold reference standards, blanks and field duplicates are routinely inserted into the sample stream, as part of Great Bear’s quality control/quality assurance program (QAQC). No QAQC issues were noted with the results reported herein. 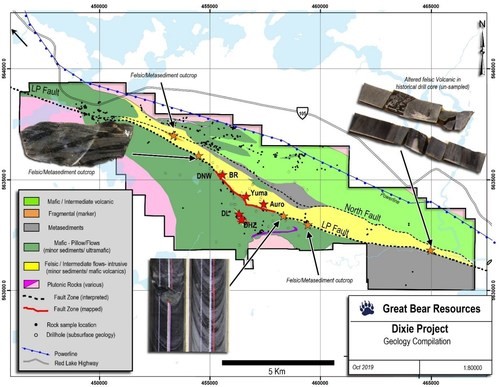 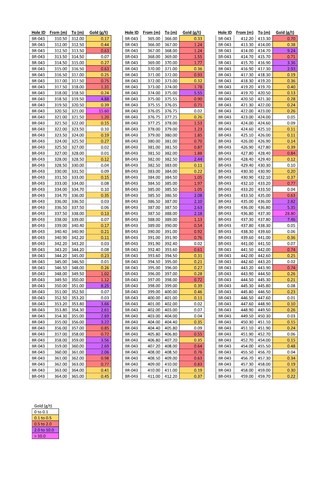 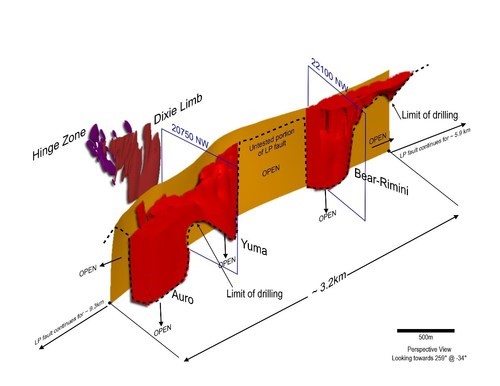 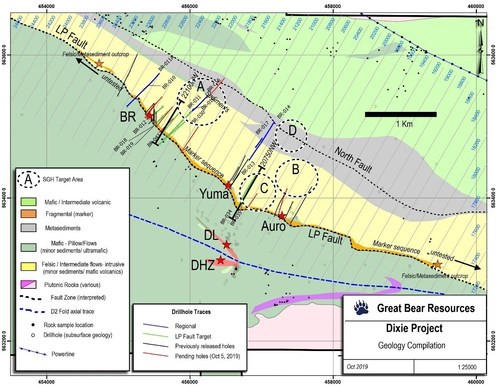 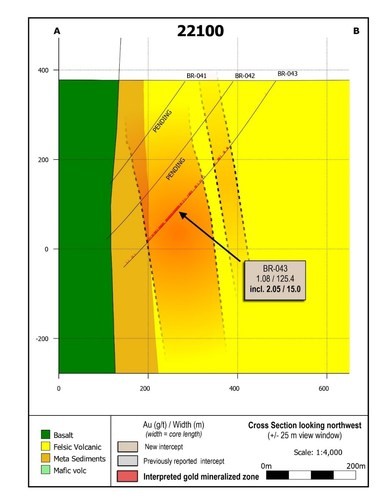 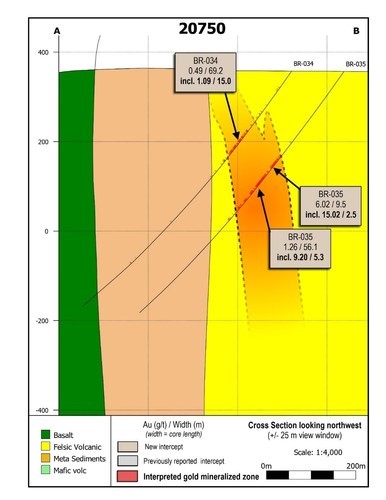