Great Atlantic Resources Corp. (TSX-V:.GR) (FRA:PH01) is pleased to announce 2021 exploration plans for its Keymet Precious Metal – Base Metal Property, located in northeast New Brunswick.  One priority area of focus for 2021 work is the northwest region where the Company has reported high grade gold, silver, copper and zinc, including a drill intercept of 9.04 zinc, 9.19% copper and 1,158 gams per tonne (g/t) silver over 3.00 meters core length. 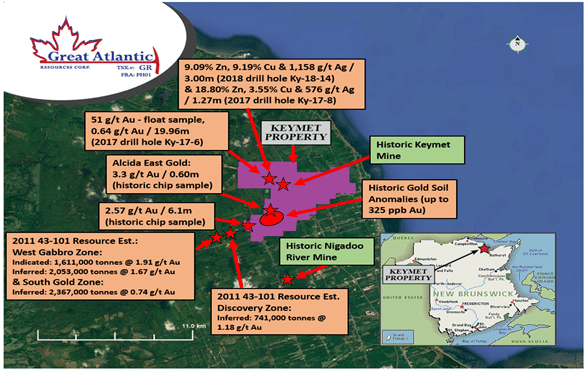 Great Atlantic’s focus since acquiring the property in 2011 has been the northwest region of the property (see news releases on the Company’s website). Six polymetallic vein type occurrences with silver, zinc, lead and plus / minus copper and plus / minus gold are reported in the northwest region of the Keymet Property (source: New Brunswick Dept. of Natural Resources and Energy Development Mineral Occurrence Database). Prominent of these are the Keymet deposit and Elmtree 12 occurrence.

By the early 1950s the Number 1 Zone at the Keymet deposit was reported to be traced for 91 meters along strike, to a depth of 137 meters and averaging 3.4 meters in width. The Keymet Mine operated during the mid-1950s, producing lead, zinc, copper and silver.  Production at this mine was terminated in 1956 due to a fire at the site. Reported production at the Keymet Mine during 1954-1956 is 59,000 tonnes averaging 2.59% zinc, 2.44% lead, 0.25% copper and 33.94 g/t silver. Two rock dump samples collected by Great Atlantic during 2011 at the historic Keymet Mine site returned: 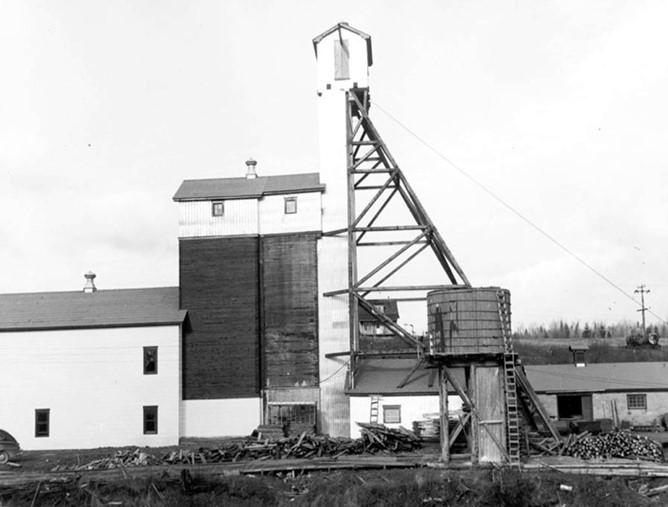 Great Atlantic discovered gold in float and bedrock in the northwest region of the Keymet Property, highlights including:

Great Atlantic conducted diamond drilling during 2015, 2017 and 2018 at the Elmtree 12 vein system within the northwest region of the Keymet Property, intersecting high grade silver, copper and zinc mineralization in veins within a north-south trending, sub-vertical system. More significant intercepts (core length) include: 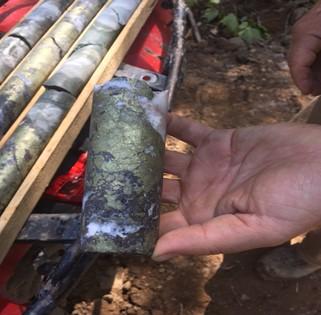 Great Atlantic is also planning exploration during 2021 in the southwest to central regions of the Keymet Property including prospecting and rock / soil geochemical sampling and geophysical surveys.  Historic and Company exploration has identified these regions of the property to have gold potential. Reported historic highlights in these regions include:

The Company conducted a brief prospecting program in the central region of the property during 2020. Three float samples collected during the 2020 program in this region returned anomalous values for gold (0.438, 0.18 and 0.17 g/t gold). 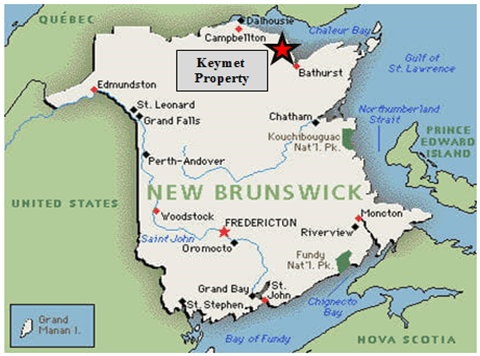 The historic Nigadoo River Mine is located approximately 4 km south of the Keymet Property. Polymetallic massive sulfide veins were mined at the Nigadoo River Mine during the 1960s and 1970s with copper, lead, zinc and silver being produced. The New Brunswick Dept. of Natural Resources and Energy Development Mineral Occurrence Database reports shaft depth and production totals at this historic mine. Production during 1967-1971 is reported as 1.126 million tonnes at 2.2% Pb, 2.1% Zn, 0.24% Cu and 92.57 g/t Ag. Production during 1973-1977 (after a 2- year closure) is reported to be 0.733 million tonnes (only partial metal grades reported). The shaft is reported to at least 470 meter deep. Great Atlantic has no interest in this historic mine site.

Three gold deposits with reported mineral resources are reported west of the southwest region of the Keymet Property within adjacent mineral claims. Great Atlantic has no interest in these adjacent mineral claims. These deposits, referred to as the West Gabbro Zone, Discovery Zone and South Gold Zone, are reported within 2 kilometers of the Keymet Property southwest boundary. Micon International Limited reported 43-101 compliant mineral resources for the West Gabbro Zone (WGZ), South Gold Zone (SGZ) and Discovery Zone (DZ) in the Technical Report on the Mineral Resource Estimate for the Elmtree Gold Property (Effective Date: 4 March 2011) for CNRP Mining Inc. and Gorilla Resources Corp. The reported resources include:

As reported by Micon International Limited, the resources were estimated using a three-dimensional block modelling approach. For each mineralized zone, wireframe models were built up from intersected geologic limits. Grade interpolation for the WGZ was conducted using the inverse distance cubed technique while interpolations for the DZ and SGZ were conducted using the nearest neighbour technique due to limited drill hole information. The cut-off grade used was 0.5 g/t gold.

Access to the Keymet Property is excellent with paved roads transecting the property, including a provincial highway. The property covers an area of approximately 3,400 hectares and is 100% owned by the Company.

The Company also announces it has granted 375,000 options at an exercise price of $0.60. The options are exercisable for five years and will be cancelled 30 days after cessation of acting as director, officer, employee or consultant of the Company. The options are subject to regulatory approval. 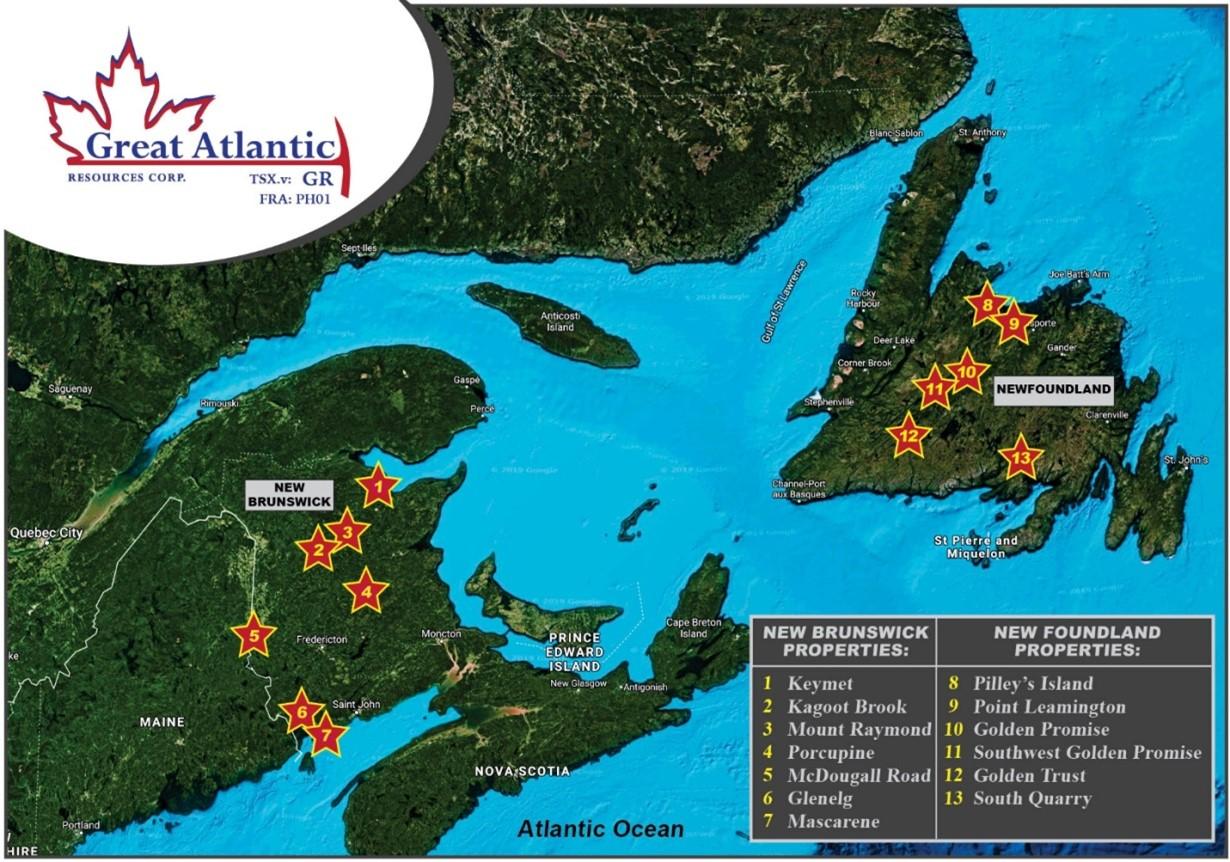