Granada Gold Mine Inc. (TSX-V: GGM) is pleased to provide another update on its continuing drill program at Granada. This release contains drill results from the 100-series, part 3, near-surface drill program targeting Vein 1. The program is progressing as expected with the intention of converting the current low-grade open pit resource at 1 gram per tonne to a smaller, higher grade open pit with the majority of the future potential ounces in a resource underground. The company has now increased the drill program to 18,000 meters with a target of 120,000 meters to be drilled.

Frank J. Basa, P.Eng., President and CEO notes, “The short-hole drill program has been successful and the company will begin with a new 200-series program with the objective of identifying deeper, down-dip, near-surface mineralization to develop a higher-grade open pit. The current program has been focused on an over 500 meters east-west strike length of a potential 5.5 kilometers mineralized strike length.”

Lengths are core length, no capping applied. Au is Gold by Fire assay, or by gravimetric finish or screen metallic method. Other assays results are still pending. As the Company is being impacted by longer than expected turnaround time (TAT) of analytical results due to COVID-19 and extensive workloads at the ALS laboratory the Company has decided to send the next samples to SGS laboratories to shorten the time frames.

Typical true thickness of the number 1 vein is 1.5 to 6.0 meters. The halo effect around vein 1 has been measured up to 20 meters true thickness with numerous mineralized veinlets hosting native gold. It has been estimated, based on metallurgical testing, that close to 50 percent of the gold is in native form and can be recovered from these veinlets.

Drilling continues with two drills remaining on site at Granada.  The goal is to complete 6000-meter drill program intervals with the objective of targeting 120,000 meters. The current program is focused on exploration on only 20 percent of the entire potential 5.5-kilometre mineralized structure.

The technical information in this news release has been reviewed by Claude Duplessis, P.Eng., GoldMinds Geoservices Inc. member of Québec Order of Engineers and a qualified person in accordance with National Instrument 43-101 standards.

All NQ core assays reported were obtained by either 1-kilogram screen fire assay or standard 50-gram fire-assaying-AA (Atomic Absorption) finish or gravimetric finish at ALS Laboratories in Val d’Or, Québec, Thunder Bay, Ontario, Sudbury, Ontario or Vancouver, British Columbia. The screen assay method is selected by the geologist when samples contain visible gold. The drill program, Quality Assurance/Quality Control (“QA/QC”) and interpretation of results is performed by qualified persons employing a QA/QC program consistent with NI 43-101 and industry best practices. Standards and blanks are included with every 20 samples for QA/QC purposes for this program in addition to the lab QA/QC.

Granada Gold Mine Inc. continues to develop the Granada Gold Property near Rouyn-Noranda, Quebec. Approximately 120,000 meters of drilling has been completed to date on the property, focused mainly on the extended LONG Bars zone which trends 2 kilometers east-west over a potential 5.5 kilometers of mineralized structure. The highly prolific Cadillac Break, the source of more than 75 million plus ounces of gold production in the past century, cuts through the north part of the Granada property but is not necessarily indicative of mineralization hosted on the Company’s property.

* Pit constrained mineral resources are reported at a cut-off grade of 0.4 g/t Au within a conceptual pit shell.

The Granada Shear Zone and the South Shear Zone contain, based on historical detailed mapping as well as from current and historical drilling, up to twenty-two mineralized structures trending east-west over five and half kilometers. Three of these structures were mined historically from two shafts and two open pits. Historical underground grades were 8 to 10 grams per tonne gold from two shafts down to 236 m and 498 m with open pit grades from 5 to 3.5 grams per tonne gold.

The Company is in possession of all mining permits required to commence the initial mining phase, known as the “Rolling Start”, which allows the company to mine up to 550 tonnes per day. Additional information is available at www.granadagoldmine.com. 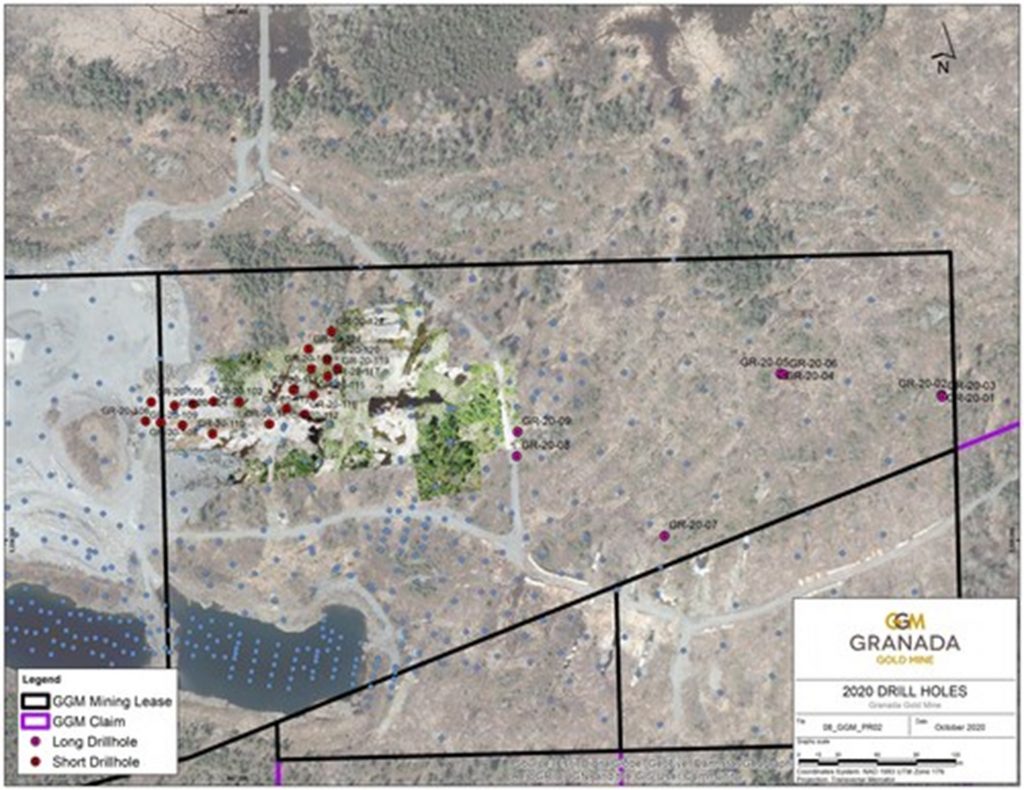