The underground drilling program is targeting bulk tonnage-style mineralization in the Plomosas Mine Area (following the Company’s recent discovery at level 775, approximately 250 m below surface) aiming to delineate high margin precious and base metals mineralization with potential for large tonnage and scalability.

The successful underground exploration drilling program at the Plomosas Mine Area has discovered extensions to the wide mineralization previously sampled at level 775, both below, and laterally to, previously mined areas. The mineralization is represented by thick intercepts of Au-Ag-Pb-Zn-Cu mineralization hosted in a series of hydrothermal breccias.

GR Silver Mining President and CEO, Marcio Fonseca, commented, “These are extraordinary drilling results from the Plomosas Mine Area, indicating potential for size and scalability in the geological model to host attractive precious and base metals mineralization in areas close to existing underground development. We will continue with underground drilling in the vicinity of this polymetallic mineralization in 2021 and will also apply the technical knowledge to look for similar mineralization in other targets in the Plomosas Silver Project.”

The wide mineralized zone is mainly comprised of high-grade Au-Ag-Pb-Zn hydrothermal breccia, with late disseminated chalcopyrite (Cu) – pyrite rich veins/veinlets. A pervasive chalcopyrite-pyrite quartz stockwork system is common not only on the footwall, but also on the hanging wall of the mineralized hydrothermal breccia. This system is apparently hosted by the two fault systems and also by specific geological units, oxidized andesites and andesitic tuffs, defining a prospective corridor along strike. A similar style of mineralization was recently mapped in the upper levels of the Plomosas Mine Area and is currently the subject of detailed exploration. Based on the recent underground drilling results, GR Silver Mining is continuing the investigation of all historical underground sampling in order to delineate new zones for drilling, aiming to incorporate all new areas in the upcoming NI 43-101 resource estimation.

Table 1 and 2 summarize the most significant assay results for the underground drill holes reported in this News Release.

The following table (Table 3) summarizes the collar locations for drill holes identified in this News Release.

GR Silver Mining believes that the Plomosas Mine Area is part of a much larger low sulphidation epithermal system as indicated by field evidence along one kilometre of strike length, where only 400 m of that strike had previously been drilled. The 2020 underground and surface exploration program defined multiple styles of mineralization, creating an opportunity for the Company to continue discovering new mineralized zones close to the surface.

The recent drill holes, completed by First Majestic from 2016 to 2018, followed QA/QC protocols reviewed and validated by GR Silver Mining, including insertion of blank and standard samples in all sample lots sent to First Majestic’s Laboratorio Central facilities in La Parilla, Durango, for sample preparation and assaying. Additional validation and check assays were performed by an independent laboratory at SGS de México, S.A. de C.V. facilities in Durango, Mexico. The analytical methods applied for these recent holes for Ag and Au assays comprised of Fire Assay with Atomic Absorption finish for samples above Au >10ppm and Ag >300ppm and Gravimetric Finish. Pb and Zn were analyzed using Inductively Coupled Plasma Optical Emission Spectrometry. GR Silver Mining has not received information related to the Grupo Mexico QA/QC and assay protocols and at this stage is considering the information historic for news release purposes.

The Company has commenced an 11,900 m drilling program with surface holes focused on expanding known mineralization along strike in two initial areas, the Plomosas Mine Area and the San Juan Area. Underground drilling included in the program will target the extension of recent polymetallic discoveries at the lowest level (775 m RL, or ~250 m below surface) of the Plomosas Mine Area and six low sulphidation epithermal veins at San Juan Area. Both areas will be the subject of NI 43-101 resource estimations following completion of this drill program.

The silver and gold mineralization on this Project display the alteration, textures, mineralogy and deposit geometry characteristics of a low sulphidation epithermal silver-gold-base metal vein/breccia mineralized system. Previous exploration was focused on Pb-Zn-Ag-Au polymetallic shallow mineralization, hosted in NW-SE structures in the vicinity of the Plomosas mine. The E-W portion of the mineralization and extensions for the main N-S Plomosas fault remain under-explored.

San Marcial is a near-surface, high-grade silver-lead-zinc open pit-amenable project, which contains a 36 Moz AgEq (Indicated) and 11 Moz AgEq (Inferred) NI 43-101 resource estimate. The company recently completed over 320 m of underground development in the San Marcial Resource Area, from which underground drilling is planned to expand the high-grade portions of the resource down dip. The Company recently discovered additional mineralization in the footwall, outside of the existing resource, and will also be drilling this area. GR Silver Mining is the first company to conduct exploration at San Marcial in over 10 years. The NI 43-101 resource estimate (San Marcial Project – Resource Estimation and Technical Report) was completed by WSP Canada Inc. on March 18, 2019 and amended on June 10, 2020. 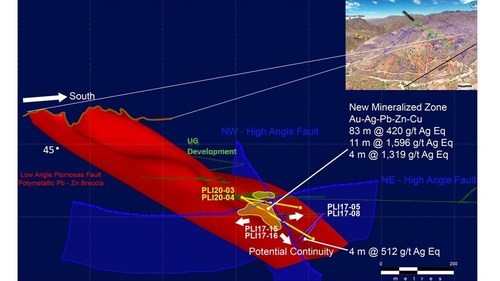