GR Silver Mining Ltd. (TSX-V: GRSL) (FRANKFURT: GPE) (OTCQB: GLYXF) is pleased to report additional high-grade drill results at its 100% owned Plomosas Silver Project  in Sinaloa, Mexico. These results are located in the San Juan area, one of six priority areas with a combination of recent (2016 to 2018) and historical drill data being released by the Company (See Drone Image).

GR Silver Mining President and CEO, Marcio Fonseca, commented, “The step-out drilling results  along the strike of the San Juan mineralized system have confirmed the presence of a high-grade footprint related to the breccia-hosted Pb-Zn-Ag-Au mineralization and the sub-vertical fault-hosted, low sulphidation epithermal Ag-Au vein-breccia systems. We have validated the extent of the San Juan trend on surface to span over 500 m along strike. Additionally, we have validated approximately 30% of the San Juan drill database, with reviews continuing. Based on our success in defining multiple mineralized systems and confirming high-grade mineralization along strike, we believe that there is upside potential for further positive results on the remaining drill holes still to be released.”

Table 1 summarizes the most significant drill assay results for the second group of holes released for the San Juan area.

The existing drill holes for the Plomosas Project were generated by drill campaigns completed by Grupo Mexico between 1982-2000 and First Majestic Silver Corp. (“First Majestic”) between 2016-2018 and form an extensive database which GR Silver Mining is consolidating and validating. The primary objective of Grupo Mexico was the discovery of Pb and Zn mineralization as potential feed for their historical flotation plant operations nearby. First Majestic drilled the Plomosas Mine Area aiming to define new mineralized zones down dip and along strike from the surface and underground sites. Wherever assay intervals are identified as missing within the drill hole database, the relevant drill holes will be re-examined, sampled, and assayed using the remaining core to complete the sequence of results.

Table 2 summarizes the not sampled historical drill hole intervals (“NS”) for the second group of holes released for the San Juan area.

The gold and silver mineralization appears to be a later phase relative to polymetallic (Zn-Pb-Ag-Au) breccias and they are commonly located in E-W to NE-SW and N-S to NE-SW fault systems, respectively (Figure 1). The gold and silver bearing structures are characterized as a set of low sulphidation epithermal veins and stockworks on the hanging wall and footwall of the polymetallic breccias, presenting expanded zones for future resource modelling.

The scientific and technical data contained in this News Release related to the Plomosas Project was reviewed and/or prepared under the supervision of Marcio Fonseca, P.Geo.

GR Silver Mining has not received information related to the Grupo Mexico QA/QC and assay protocols and at this stage is considering the information historic for news release purpose.

GR Silver Mining Ltd. (GRSL.V) is a Mexico-focused company engaged in cost-effective silver-gold resource expansion on its key assets which lie on the eastern edge of the Rosario Mining District, Sinaloa, Mexico.

GR Silver Mining owns 100% of the Plomosas Silver Project located near the historic mining village of La Rastra, within the Rosario Mining District. The Project is a past-producing asset where only one mine, the Plomosas silver-gold-lead-zinc underground mine, operated from 1986 to 2001. The Project has an 8,515-hectare property position and is strategically located within 5 km of the San Marcial Silver Project in the southeast of Sinaloa State, Mexico. The Plomosas Project comprises six areas with an average of 100 surface and underground drill holes in each area, geophysical and geochemical data covering most of the concession, and the delineation of 16 exploration/drilling targets.

Plomosas and San Marcial collectively represent a geological setting resembling the multimillion-ounce San Dimas Mining District which has historically produced more than 620 Moz silver and 11 Moz gold over a period of more than 100 years. 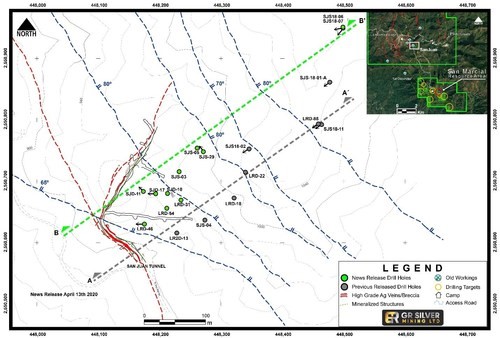