Following on from new mineralized zones drilled at San Juan earlier in the program (see News Release November 23, 2020), the latest drilling results continue to define high-grade Ag-Au epithermal mineralization in the San Juan Area and expansion of the mineralized trend southwards towards the nearby San Francisco Vein. They also demonstrate near-surface high-grade Ag vein zones that will be integrated in the upcoming resource estimation (Figure 1).

GR Silver Mining President and CEO, Marcio Fonseca, commented, “The Company continues to outline a much larger epithermal system in the San Juan Area of the Plomosas Project. The recent drilling data at the San Francisco Vein delineates additional zones of epithermal veining and hydrothermal breccias, extending existing structures 200 m to the south. The integration of the San Juan Area with the potential  acquisition of concessions between the San Marcial and Plomosas Projects delineates an initial 4 km long, 100%-controlled north-south mineralized corridor. This corridor represents only one of the nine mineralized corridors under exploration by the Company inside the Plomosas Silver Project. Our 2021 drilling program is focused on the resource estimation for the San Juan and Plomosas Mine Areas, and it will also target potential high-grade Ag-Au discoveries in the nine mineralized corridors that have been identified to date in the Plomosas Project.”

Results of drilling at the San Francisco Vein indicate a north-south trend with a series of outcrops exhibiting multiple phases of veining, stockwork and brecciation. These outcrops are located approximately 200 m south of the San Juan Vein, indicating an opportunity for expansion of the mineralized system along strike (Figure 1). The drilling results in this news release also suggest that a large epithermal system continues towards the under acquisition concessions located between the Plomosas and San Marcial Projects (see News Release February 1, 2021). 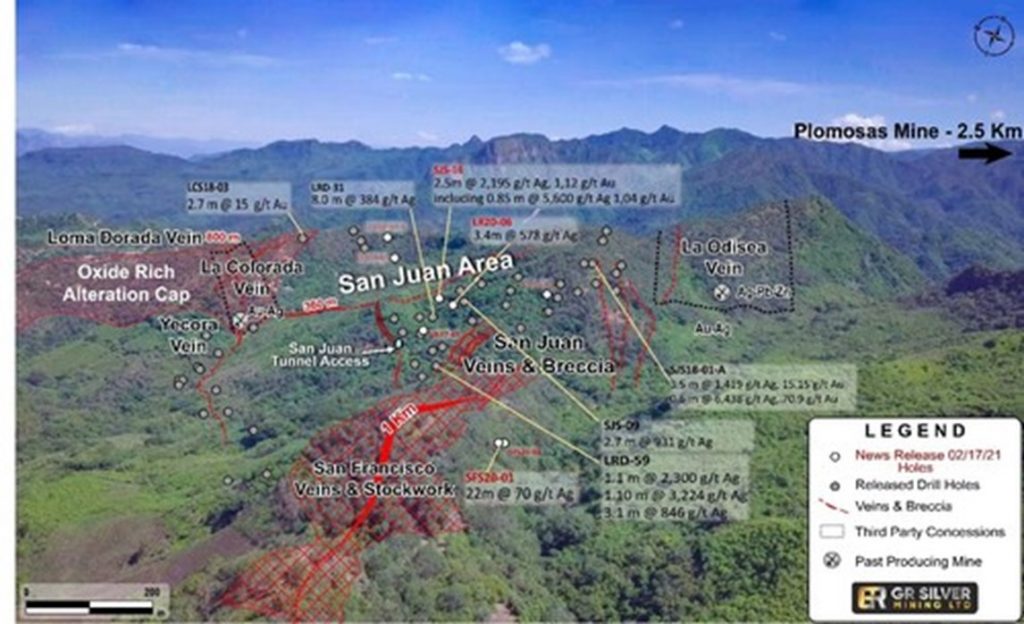 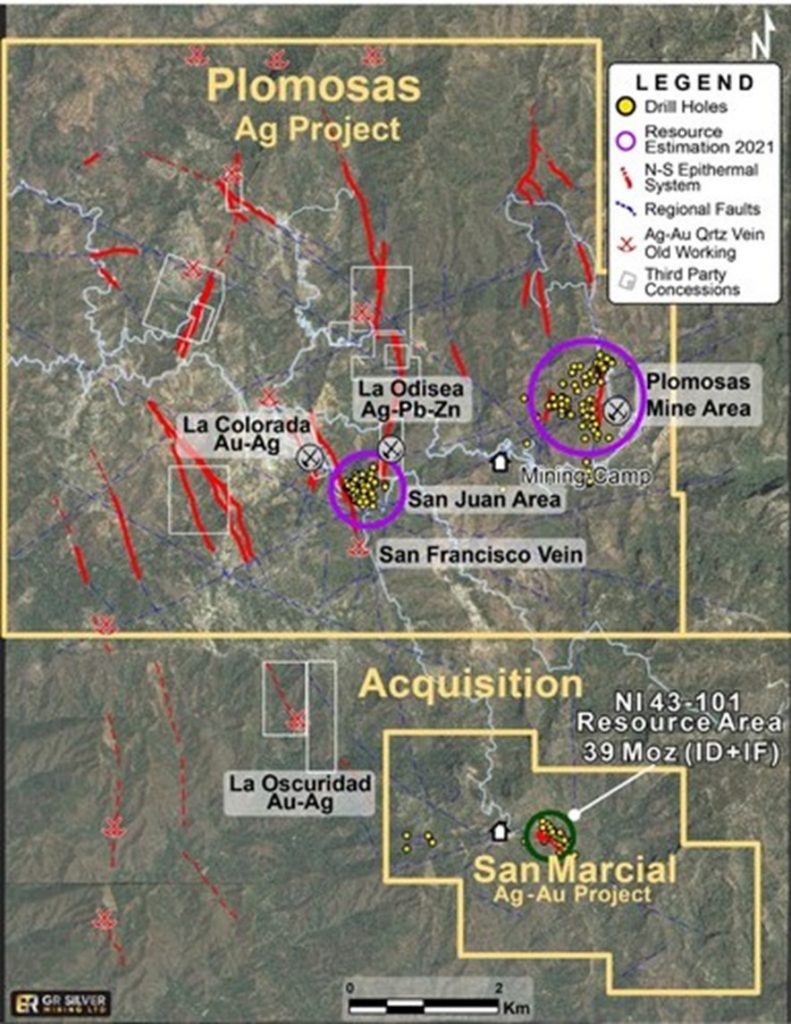 The following table shows the drill results that are expected to be included in the upcoming resource estimation for the San Juan Area.

The following table summarizes the collar locations for drill holes reported in this News Release.

These very encouraging drill hole results not only confirm the presence of high-grade Ag-predominant epithermal veins at the San Juan Area, but also open up the opportunity for additional continuity of the mineralized trend to the south. The potential to increase the strike of the mineralization from the existing 2 km to 4 km and achieve new discoveries is still conceptual in nature. However, recent field mapping and sampling provides strong support for a 4 km long structural corridor.

GR Silver Mining believes that Plomosas represents a district-scale project. The Company is carrying out a 10,000 m diamond core drilling program and plans to complete a resource estimation in two areas (Plomosas and San Juan) in the second quarter of 2021. Work to date has already resulted in success in expanding the known zones of mineralization within these two areas. The Plomosas Mine Area displays evidence of a 600 m long epithermal system, potentially extending up to 1.2 km, where multiple veins and discoveries have so far defined a much larger high-grade Ag and Au mineralized footprint. Through surface exploration and drilling, the San Juan Area, initially thought to consist of only one 400 m long epithermal vein, now appears as a 2 km long epithermal system, with at least six epithermal veins.

The Plomosas Mine Area and San Juan Area, currently undergoing resource estimations, each have a geological footprint similar to the nearby San Marcial Project, where the company has estimated a NI 43-101 resource of 29 million ounces Ag (Indicated) and 10 million ounces Ag (Inferred). The NI 43-101 resource represents only the initial 500 m long structural corridor, part of a 6 km trend under exploration inside the San Marcial Project.

The integration of the Plomosas Project and the San Marcial Project, together with concessions under acquisition located between them, provides the company full control of all major structural corridors on the eastern edge of the Rosario Mining District (Figure 2). GR Silver Mining will continue to explore new mineralized zones close to the surface in the remaining part of the exploration concessions in 2021, supporting constant resource growth.

The Company is carrying out a drilling program with surface holes focused on expanding known mineralization along strike in two initial areas, the Plomosas Mine Area and the San Juan Area. Underground drilling included in the program will target the extension of recent Au rich discoveries at the lowest level (775 m RL, or ~250 m below surface) of the Plomosas Mine Area and six low sulfidation epithermal veins at San Juan Area. Both areas will be the subject of NI 43-101 resource estimations following completion of this drill program.

The silver and gold mineralization on this Project display the alteration, textures, mineralogy and deposit geometry characteristics of a low sulfidation epithermal silver-gold-base metal vein/breccia mineralized system. Previous exploration was focused on Pb-Zn-Ag-Au polymetallic shallow mineralization, hosted in NW-SE structures in the vicinity of the Plomosas mine. The E-W portion of the mineralization and extensions for the main N-S Plomosas fault remain under-explored.

San Marcial is a near-surface, high-grade silver-lead-zinc open pit-amenable project, which contains a 36 Moz AgEq (Indicated) and 11 Moz AgEq (Inferred) NI 43-101 resource estimate. The Company has filed a National Instrument 43-101 report entitled “San Marcial Project Resource Estimation and Technical Report, Sinaloa, Mexico” having an effective date of March 18, 2019 and an amended date of June 10, 2020 (the “Report”). The Report was prepared by Todd McCracken and Marcelo Filipov of WSP Canada Inc. and is available on SEDAR. The company recently completed over 320 m of underground development in the San Marcial Resource Area, from which underground drilling is planned to expand the high-grade portions of the resource down dip. The Company recently discovered additional mineralization in the footwall, outside of the existing resource, and will also be drilling this area. GR Silver Mining is the first company to conduct exploration at San Marcial in over 10 years.

GR Silver Mining’s other projects are situated in areas attractive for future discoveries and development in the same vicinity of Plomosas and San Marcial in the Rosario Mining District. The recently announced Share Purchase Agreement (see News Release February 1, 2021), to acquire Marlin Gold Ltd, consolidates the business strategy to control the most important silver and gold assets in the multi-million ounce historic Rosario Mining District. The acquisition is expected to close on March 31, 2021, when GR Silver Mining will control a portfolio of over 1000 Km2,  two past producing mines fully permitted for future developments and  a  total combined 75 km of structures with field evidence of 24 Ag-Au veins in historic old workings.