GR Silver Mining Ltd. (TSX-V: GRSL) (OTCQB: GRSLF) (FRANKFURT: GPE) is pleased to report drill results in the northern portion of the Plomosas Mine Area. These results represent intersections of polymetallic (Ag-Au-Pb-Zn) hydrothermal breccia near the surface in unmined areas in the historic Plomosas Mine Area (Figure 1) at the Plomosas Silver Project (“Plomosas Project”) in Sinaloa, Mexico.

GR Silver Mining President and CEO, Marcio Fonseca, commented “The reported drilling results continue to demonstrate the presence of high-grade precious metal mineralization in unmined zones of the historic Plomosas Mine Area. These results also confirm the presence of wide, polymetallic (Ag-Au-Pb-Zn) hydrothermal breccias in under-explored extensions that will be integrated into the upcoming maiden resource estimation. The Company has also discovered continuous wide Ag-Au rich polymetallic mineralization near surface, in the form of high-grade epithermal veins, as well as wide, shallow mineralized zones that demonstrate potential for future open pit development in a historic Pb and Zn underground mining project”.

The following figure illustrates the location of all surface drill holes released to date on the Plomosas Mine Area. The Company has released a total of 366 surface and underground drill holes in the Plomosas Project, which also includes the San Juan Area. All results released for this area are being incorporated into a 3D Model, part of the upcoming maiden resource estimation. 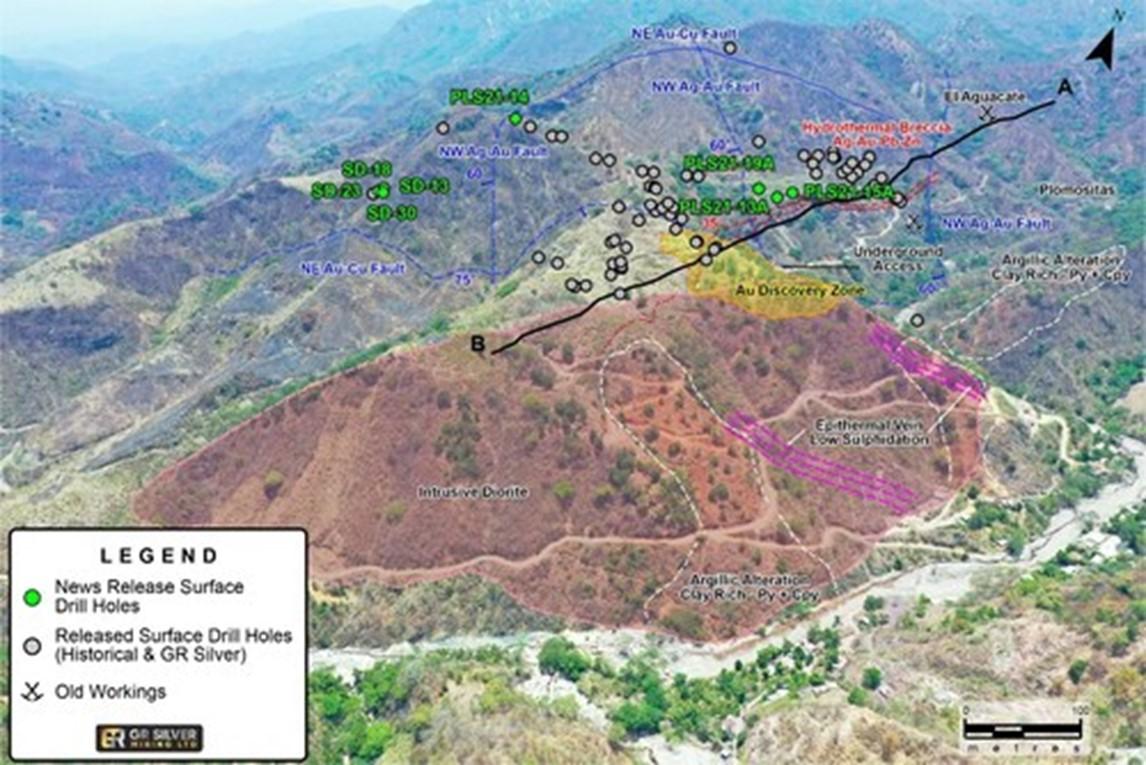 GR Silver Mining has completed over 16,000 m of surface and underground core drilling at the Plomosas Project since its acquisition in 2020. This represents a major advance for a development stage project  which had been dormant for many years. Additionally, the Company’s exploration team has completed structural and geological mapping surveys in both areas, revealing what the Company believes to be a district-scale Ag-Au rich epithermal system. The Company is planning the continuation of exploration and surface drilling along strike of the mineralized systems in both areas, aiming to discover extensions to the planned resource estimates in the coming months.

The longitudinal section below represents the N-S trend of the Plomosas Mine Area, displaying the location of all surface and underground drill holes released to date and the upside potential for additional Ag-Au mineralization to be discovered along strike and down dip. 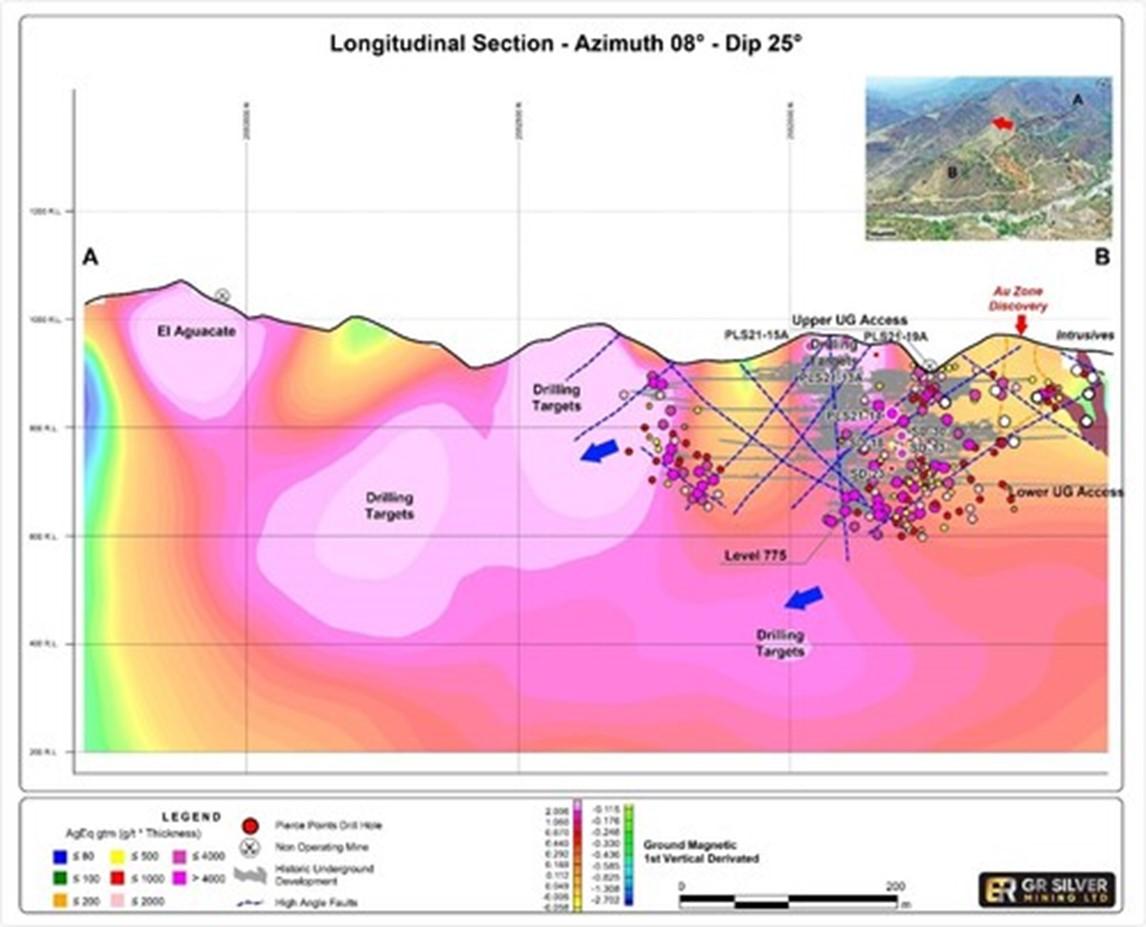 The Company also received TSX-V approval to the share for debt transaction previously announced on May 13, 2021 and consequently has issued 45,999 common shares to settle debt of $32,659.  All shares issued in conjunction with this debt settlement are subject to a hold period expiring October 1, 2021 in accordance with applicable securities laws and the policies of the TSX-V.

The silver-gold mineralization on this Project displays the alteration, textures, mineralogy and deposit geometry characteristics of a low sulphidation epithermal silver-gold-base metal mineralized vein/breccia system. Previous exploration was focused on polymetallic (Pb-Zn+/-Ag-Au) shallow mineralization, hosted in NW-SE structures in the vicinity of the Plomosas Mine.

The E-W portion of the mineralization and extensions of the main N-S Plomosas Fault remain under-explored.

San Marcial is a near-surface, high-grade silver-lead-zinc open pit-amenable project. The Company filed a National Instrument 43-101 report entitled “San Marcial Project Resource Estimation and Technical Report, Sinaloa, Mexico” having an effective date of March 18, 2019 and an amended date of June 10, 2020, which contains a 36 Moz AgEq (Indicated) and 11 Moz AgEq (Inferred) resource estimate. The Report was prepared by Todd McCracken and Marcelo Filipov of WSP Canada Inc. and is available on SEDAR. The company recently completed over 320 m of underground development in the San Marcial Resource Area, from which underground drilling is planned to expand the high-grade portions of the resource down-dip. The Company recently discovered additional mineralization in the footwall, outside of the existing resource, and will also be drilling this area. GR Silver Mining is the first company to conduct exploration at San Marcial in over 10 years.