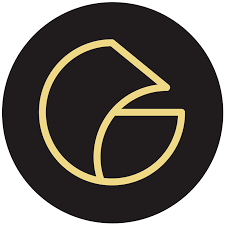 Results have been received from the 2019 core drilling program including a 28.7 m wide intersection containing 92 g/t silver (Ag).

Following the successful 2019 drill program, GR Silver is preparing for its 2020 core drilling campaign, which will incorporate a maiden underground program, as well as surface drilling.

GR Silver Mining President and CEO, Marcio Fonseca, commented, “After receiving the wide silver results at the Faisanes target from our 2019 drill program, we are pleased to announce that work has begun on our 2020 program. The first phase will involve underground drilling from the existing San Marcial tunnel, where work is already underway to provide drill access. High grade deep historical drill results suggest that the NI 43-101 resource is open at depth and could develop into a high-grade underground target below the near-surface resources. We remain steadfast in our goal to increase the silver resource at San Marcial.

Coinciding with our name change from Goldplay Exploration Ltd. to GR Silver Mining Ltd., our team has commenced the due diligence reviews of data associated with agreements on two significant land packages that surround the San Marcial Project. The two projects being reviewed for acquisition consist of past-producing silver-gold mines, defined targets and ample grass-roots exploration opportunities. Upon successful incorporation of the La Trinidad and Plomosas projects, GR Silver Mining Ltd. is positioned to become a leading mining company in the “Gran” Rosario Mining District, with multiple advanced stage, high grade silver-gold projects.”

Results from the final three holes of the Company’s maiden drill program at San Marcial in 2019 reveal additional high-grade silver mineralization over attractive widths, as well as anomalous gold mineralization. They also confirmed continuity of the mineralized zone 30 m to the east of the NI 43-101 resource, supporting potential expansion into the Guacamayo target.

The 2019 program focused on new targets generated by the Company outside the NI 43-101 resource area. The full program consisted of eight diamond core holes (see Appendix), totaling 1,210.5 m on the Faisanes, Nava and Guacamayo targets (Figure 1).

The high-grade results at the Faisanes target in drill holes SM-19-01, SM-19-07 and surface trench SMtr-001 have the potential to provide an extension to the San Marcial NI 43-101 silver resource 30 m in a NW direction. A third drill hole, SM-19-04, located 120 m to the west (Figure 1), did not return obvious mineralization, but proved important in improving the Company’s understanding of the geology between the Faisanes and Nava targets.

The Guacamayo target is located at the SE end of, and along strike from, the San Marcial Resource Area (Figure 1). During 2019, results from geological prospecting and trenching at this target confirmed the existence of anomalous gold and silver associated with structures near the contact between an upper volcanic package and underlying dacitic units. As reported in our News Release dated 8 August, 2019, one trench (SMtr-022) at Guacamayo returned a wide zone of 24 m at 219 g/t Ag and 0.25 g/t Au. In addition, trench SMtr-019 contained 5 m at 0.6 g/t Au.

The final hole in the 2019 drill program was targeted at Guacamayo in the vicinity of trench SMtr-033 which contained several intervals of anomalous gold associated with a structural contact zone of faults, stockwork, quartz veinlets, hydrothermal breccia and a late stage dacitic dyke. The 60 m drill hole, SM-19-08, intersected anomalous narrow zones of Au and Ag mineralization up to 0.6 m at 0.58 g/t Au and 138 g/t Ag (Table 1 and Figure 3). Other drill targets, for testing in the 2020 surface drilling program, are being assessed at Guacamayo to investigate the continuity of mineralization to the SE, along strike from the San Marcial resource.

The planned underground core drilling campaign will focus on testing down-dip extensions to the 2019 NI 43-101 San Marcial silver resource, as well as investigating continuity of the gold potential that was discovered in 2019, in the footwall sequence below the silver resource. Drilling to date has only tested the silver resource to approximately 250 m vertical depth, and remains open at depth, as most sections finished in silver intervals above 1,000 g/t Ag. Development within the historical San Marcial tunnel is currently underway to provide access for the underground program that is part of the Company’s objective to increase resources.

The existing historical tunnel is approximately 170 m in length, and orientated perpendicular to the silver mineralization. Development currently underway (Figure 4) will result in the tunnel being extended a further 100m, with a cross-cut parallel to the mineralization allowing additional access along the strike of the mineralization to then test the NE-dipping breccia hosted mineralization at depth. The initial underground drill program is expected to total 2,000 m and will be followed by a surface diamond drilling program to test other targets defined on the tenement.

2019 was a milestone year for our exploration team. We made great progress on our flagship San Marcial Project by expanding the silver NI 43-101 resource by 60%, initiating a core drilling program, discovering eight new drilling targets, and hitting bonanza-grade gold on our first drill target (the first hole drilled on the property in 10 years).

Additional knowledge was fast-tracked with our detailed, cost-effective, exploration program, which incorporated our in-house XRF soil and litho-geochemistry program, geological mapping and trenching. In the past year we have collected approximately 4,000 soil samples and 5,700 litho-geochemical samples from the San Marcial concession. Analyses of these samples with our two in-house portable XRF (Niton) units has provided us with a valuable and extensive geochemical data base to aid in our exploration targeting process. Our knowledge of the silver and gold mineralization in the project has evolved significantly, which is expected to drive us toward new discoveries in 2020.

The geochemical program for 2020 is currently underway. Anomalies in pathfinder elements defined by this program will again be followed up by detailed geological mapping and trench/channel sampling, aiming at identifying additional drill targets.

Due Diligence on 2 Letters of Intent

The potential acquisitions of La Trinidad and Plomosas are a cost and time effective approach to advance our mission of delivering of high-grade silver-gold ounces in the historical Rosario Mining District. Upon completion of due diligence and the signing of definitive agreements, the extensive datasets will allow us to fully explore, not only the 6 km existing trend at San Marcial, but also an additional ~25 km of mineralized trend with at least 15 new targets inside the Plomosas Silver Project, along with prospective gold and silver targets at La Trinidad.

The due diligence process is now underway on both project opportunities.

The scientific and technical data contained in this news release related to the San Marcial Project was reviewed and/or prepared under the supervision of Marcio Fonseca, P.Geo., a non-independent qualified person to GR Silver Mining Ltd. who is responsible to ensure that the geological information contained in this news release is accurate and who acts as “qualified person” under the National Instrument 43-101 Standards of Disclosure of Mineral Projects.

GR Silver has implemented QA/QC procedures which include insertion of blank and standard samples in all sample lots sent to SGS de México, S.A. de C.V laboratory facilities in Durango, Mexico, for sample preparation and assaying. For every sample with results above Ag >100 ppm (over limits), these samples are submitted directly by SGS de Mexico to SGS Canada Inc at Burnaby, BC. The analytical methods are: 4-acid Digest and Inductively Coupled Plasma Optical Emission Spectrometry with Lead Fusion Fire Assay with gravimetric finish for silver above over limits. For gold assays the analytical methods are Lead Fusion and Atomic Absorption Spectrometry Lead Fusion Fire Assay and gravimetric finish for gold above over limits.

GR Silver recently changed its name from Goldplay Exploration Ltd to better reflect its focus on silver projects in the “Gran” Rosario Mining District. GR Silver has successfully consolidated a district-sized portfolio, owning >250 sq. km of mineral concessions in the historic Rosario gold-silver Mining District in the state of Sinaloa, Mexico. Its flagship project, San Marcial, consists of a 1,250-ha land package located south of the La Rastra and Plomosas historic mines. San Marcial is a near-surface, high-grade silver, lead, and zinc open pit amenable project for which a NI 43-101 resource estimate was completed by GR Silver in early 2019. Additionally, bonanza-grade gold was drilled in July 2019 at San Marcial, opening the potential for further gold success. GR Silver’s 100% owned El Habal precious metals project is located 20 km west of the San Marcial Project. It comprises 3,700 hectares and is located 75 km southeast of the modern coastal port of Mazatlán, and 10 km on a paved road from the historic mining town of Rosario, Sinaloa, Mexico.

GR Silver’s current focus includes expanding its NI 43-101 resource estimate at the San Marcial project, which contains 36Moz AgEq (indicated) + 11Moz AgEq (Inferred), by defining new high-grade gold and silver targets along the project’s 6 km mineralized trend. GR Silver is the first company to perform exploration work and to drill at San Marcial in over 10 years. It is a low-risk development stage project, fully exploration permitted and supported by the local communities to carry out all proposed exploration activities. A 6 km trend has so far been identified, highlighting the significant potential for further discoveries. The Company has identified 8 high-priority targets along the 6 km trend and in 2019 drilled preliminary holes into three high-priority targets at Faisanes, Nava and Guacamayo. Some of these exploration targets consist of old shallow pits, caved shafts and historic shallow underground workings in areas with extensive hydrothermal alteration, hosted by major regional structures in a felsic volcanic environment. Mapping and sampling by GR Silver have revealed evidence of dacite-rhyolite dome structures in a highly prospective geological environment for additional high-grade gold and silver discoveries.

GR Silver’s team has over 30 years of experience with senior roles in exploration, financing, and development in the mining industry, including over ten years of extensive exploration experience in the Rosario Mining District, leading to previous successful discoveries. 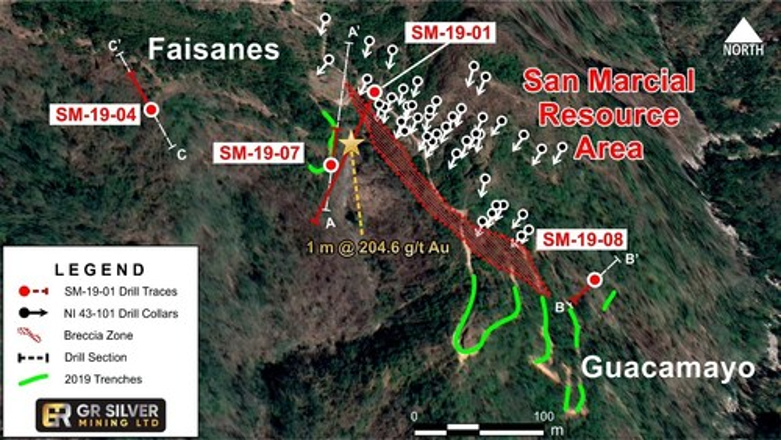 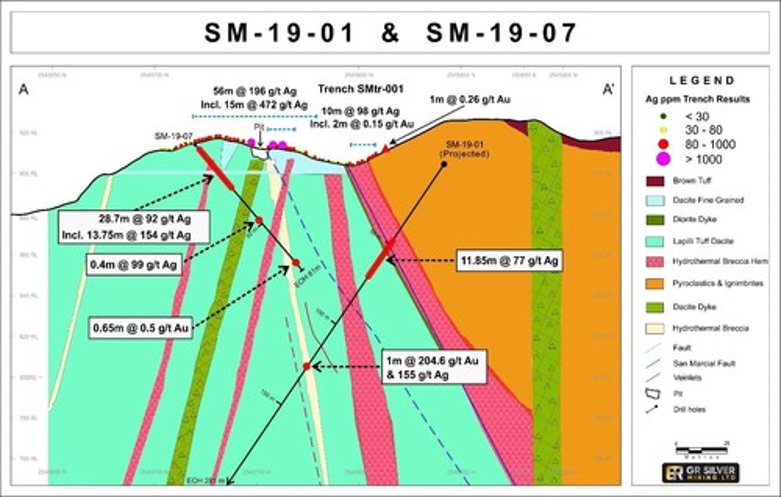 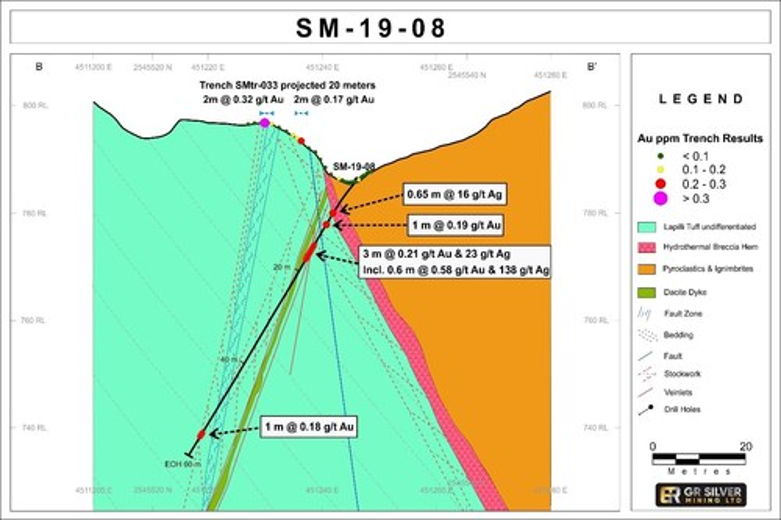 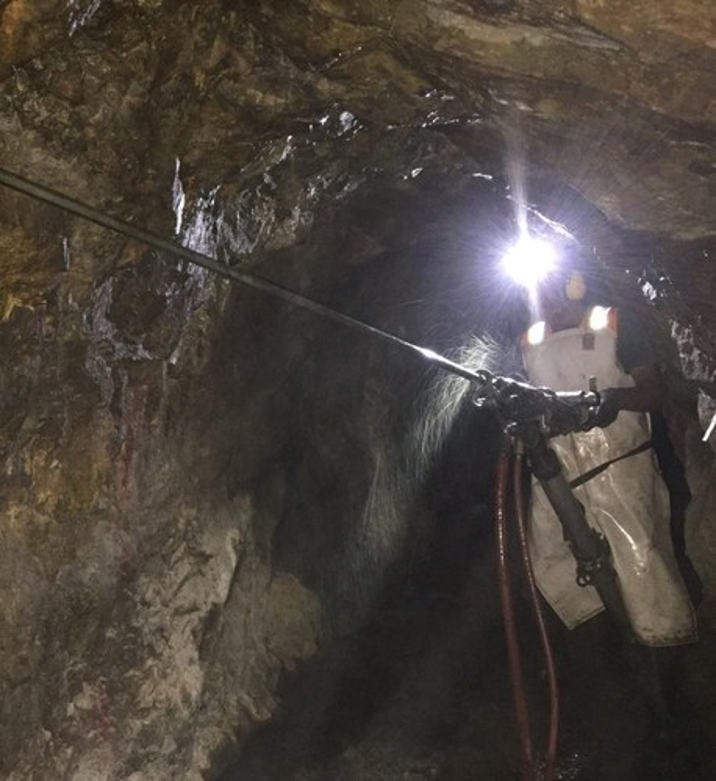