A listing of significant drill results from the San Juan Area is presented in Table 1 of Appendix A.

GR Silver Mining President and CEO, Marcio Fonseca, commented “The results from the 2021 surface drilling program at the La Colorada Vein are very encouraging. La Colorada, together with the San Juan and Yecora veins, continue to deliver near surface, high-grade silver and gold results over significant widths. These results are being incorporated into the maiden San Juan Area resource estimation, expanding the mineralized zones along strike and down dip.”

Hole LCS21-05, also being reported in this News Release, is located approximately 100 m south of LCS21-04, The mineralized zone in this hole returned wide, but lower-grade assays results, including 33.0 m @ 59 g/t AgEq. Assay results for LCS21-06 to LCS21-11 are pending release from the laboratory.

The La Colorada vein is a hydrothermal breccia that contains Au-Ag-Pb-Zn values in a mineralized quartz and hematite matrix. It is hosted in andesite and ignimbrite country rock. Sphalerite, galena and acanthite (Ag-bearing mineral) are found in the quartz veins.

The longitudinal section (Figure 2) represents the N-S trend of the San Juan Area, displaying the location of all surface and underground drill holes released to date and the upside potential for additional Ag-Au mineralization to be discovered along strike and down dip.

The Company has released results from a total of 368 surface and underground drill holes from the Plomosas Project, which also includes the San Juan Area. All results released for this area are being incorporated into a 3D model for resource estimation.

San Marcial is a near-surface, high-grade silver-lead-zinc open pit-amenable project. The Company filed a National Instrument 43-101 report entitled “San Marcial Project Resource Estimation and Technical Report, Sinaloa, Mexico” having an effective date of March 18, 2019 and an amended date of June 10, 2020 (the “Report”), which contains a 36 Moz AgEq (Indicated) and 11 Moz AgEq (Inferred) resource estimate. The Report was prepared by Todd McCracken and Marcelo Filipov of WSP Canada Inc. and is available on SEDAR. The company recently completed over 320 m of underground development in the San Marcial Resource Area, from which underground drilling is planned to expand the high-grade portions of the resource down-dip. The Company recently discovered additional mineralization in the footwall, outside of the existing resource, and will also be drilling this area. GR Silver Mining is the first company to conduct exploration at San Marcial in over 10 years. 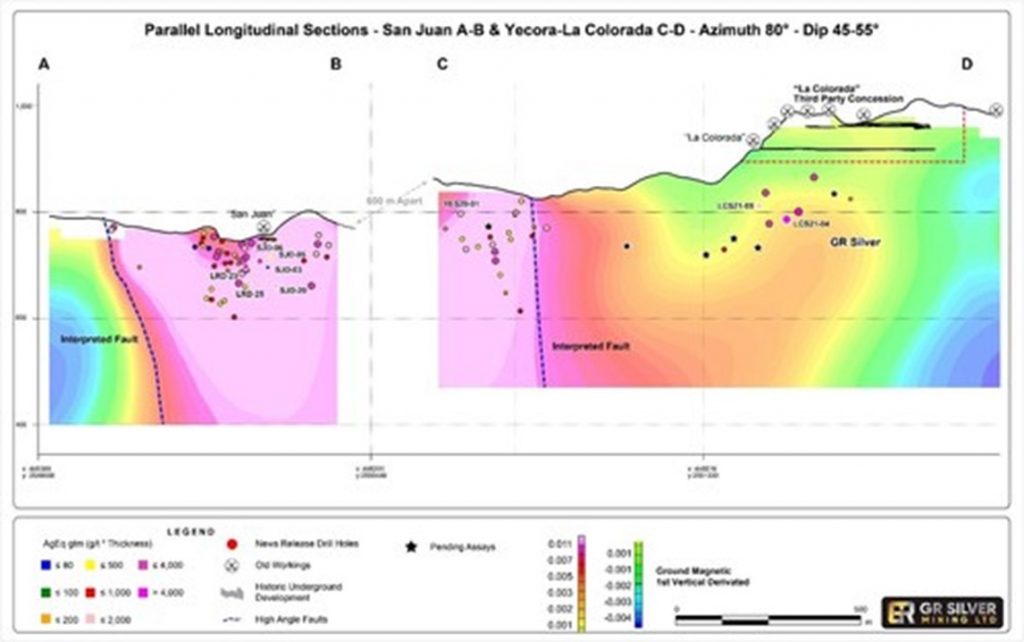