GR Silver Mining Ltd. (TSX-V: GRSL) (FRANKFURT: GPE) (OTCQB: GLYXF) is pleased to announce that it has identified more high-grade drill results at Plomosas Silver Project in Sinaloa, Mexico. The latest results are located in the Plomosas Mine Area, one of six priority areas with a combination of recent (2016 to 2018) and historical drilling data being released by the Company (See Drone Image). The most significant drill hole results for this release include the following:

The drill hole results serve as evidence for future resources at the Plomosas Mine Area – additional high-grade silver and gold in parallel and oblique systems to the main polymetallic wide breccia, hosted by the Plomosas fault (Figure 1).

GR Silver Mining President and CEO, Marcio Fonseca, commented, “The first batch of drill hole results from the Plomosas Mine Area provides support for the significant potential of this area for discoveries of new mineralization and the delineation of additional resources in the future. The results not only confirm the continuity of the polymetallic wide breccia system down-dip from the historical underground mine, but also present discoveries of parallel Au-Ag mineralized veins and breccias. These features are being incorporated into a 3D geological model for the first time. The results indicate potential for bulk tonnage polymetallic mineralization (Zn-Pb with attractive Ag-Au grades) in un-mined zones near existing underground development, as well as new opportunities for future expansion. We continue to review and validate the extensive database of drill holes, integrating all information in a 3D model aiming at a future resource estimation.”

The existing drill holes for the Plomosas Mine Area were generated by drill campaigns completed by Grupo Mexico between 1982-2000 and First Majestic Silver Corp. (“First Majestic”) between 2016-2018 and form an extensive database for GR Silver Mining. The primary objective of Grupo Mexico was the discovery of Pb and Zn mineralization as potential feed for their historical flotation plant operations nearby. First Majestic drilled the Plomosas Mine Area aiming to define new mineralized zones down-dip and along strike from the surface and underground sites. Wherever assay intervals are identified as missing within the drill hole database, the relevant drill holes will be re-examined, sampled, and assayed using the remaining core to complete the sequence of results.

The current on-site and database review by GR Silver Mining has confirmed the existence of multiple vein systems hosted in a set of regional fault zones (Figure 2). In these favorable zones, wide mineralization is generally encountered on dilational sets where the regional faults show changes in direction, both laterally and vertically.

At the Plomosas Mine Area, the drill holes from this News Release (Table 1) have intercepted polymetallic (Zn-Pb-Ag-Au) breccias and/or shears trending N-S to NW-SE and dipping 35-50 degrees, doubling the known mineralized system down-dip within the regional Plomosas fault (Figure 1). These breccias are predominantly monomictic with angular fragments and a sulfide-rich matrix.

The gold and silver mineralization appears to be a later mineralizing phase relative to polymetallic (Zn-Pb-Ag-Au) breccias and they are commonly located in E-W to NE-SW and N-S to NE-SW fault systems, respectively. The gold and silver bearing structures are characterized as a set of low sulphidation epithermal veins and stockworks on the hanging wall and footwall of the polymetallic breccias, presenting expanded zones for future resource modelling.

From 1986 to 2001, within the Plomosas Mine Area, Grupo Mexico operated a shallow 600 tpd room and pillar underground mine operation to supply material to the crushing-milling- flotation plant (decommissioned), producing both Pb concentrate and Zn concentrate. The underground mine operated only between levels 1000 m and 750 m and along a strike length of approximately 350 m. Historical underground operations mined only the polymetallic breccia. Two underground access tunnels were constructed to provide flexibility to extract ore from a total of 8,000 m of underground development. Today, following a period of care and maintenance, most of the underground development and mine infrastructure are in good condition allowing immediate access to all mineralized showings for additional sampling.

Historical reports indicate that the operations were interrupted due to low commodity prices in 2001. The historical underground cut-off grade, as reported by Grupo Mexico at the time when operations were interrupted, was based on US$290/oz Au, US$5/oz Ag and US$0.50/lb Zn and Pb. GR Silver Mining is investigating and validating the extensive database, that includes both drill hole data and also underground channel sample results, to fully integrate all the data in accordance with current commodity prices and proper QA/QC protocols to define new mineralized zones.

The scientific and technical data contained in this News Release related to the Plomosas Project was reviewed and/or prepared under the supervision of Marcio Fonseca, P.Geo.

GR Silver Mining has not received information related to the Grupo Mexico QA/QC and assay protocols and at this stage is considering the information historic for news release purpose.

GR Silver Mining owns 100% of the Plomosas Silver Project located near the historic mining village of La Rastra, within the Rosario Mining District. The Project is a past-producing asset where only one mine, the Plomosas silver-gold-lead-zinc underground mine, operated from 1986 to 2001. The Project has an 8,515-hectare property position and is strategically located within 5 km of the San Marcial Silver Project in the southeast of Sinaloa State, Mexico. The Plomosas Project comprises six areas with an average of 100 surface and underground drill holes in each area, geophysical and geochemical data covering most of the concession, and the delineation of 16 exploration/drilling targets.

Plomosas and San Marcial collectively represent a geological setting resembling the multimillion-ounce San Dimas Mining District which has historically produced more than 620 Moz silver and 11 Moz gold over a period of more than 100 years. 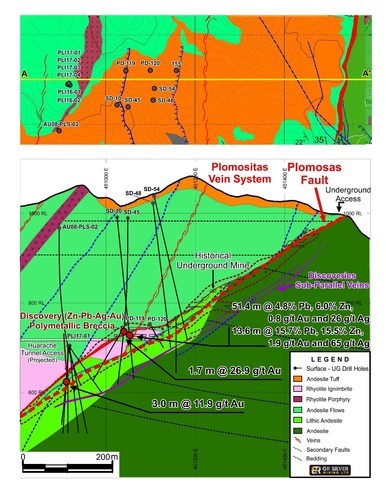 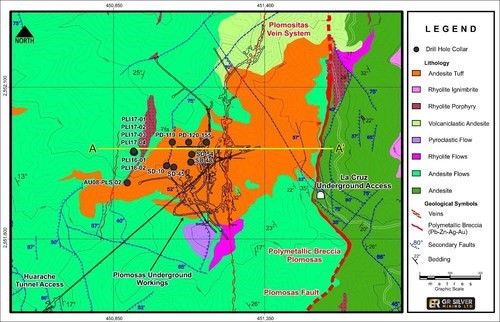