The underground drill hole results reported in this News Release are part of the drilling program that will be incorporated with existing historic drilling data to support the upcoming resource estimate on the Plomosas Project. This is one of two  areas  with resource estimates underway, the other is on the San Juan Area located 2.5 km from the Plomosas Mine Area.

The wide intervals, including 21 m of drilled silver mineralization, represent un-mined zones extending the mineralization footprint along strike and down-dip. The silver mineralization was intercepted up to 350 m below surface, in areas previously not drilled. An additional surface hole, completed in the vicinity of the Plomosas Mine Area, is also reported in this News Release, delineating a new wide zone of Pb-Zn-Ag-Au mineralization hosted by quartz-sulphide rich, banded epithermal veins.

Additional surface and underground core drilling is ongoing at the Plomosas Mine Area, along with 3D wireframe modelling of the mineralization, which will include these recently discovered high-grade Ag mineralized systems into the maiden resource estimate, scheduled for completion in Q2/2021.

The following figure illustrates a longitudinal section parallel to the Plomosas Fault along the 0.6 km trend that hosts precious and base metals mineralization at the Plomosas Mine Area, (Figure1).

GR Silver Mining President and CEO, Marcio Fonseca, commented, “Our surface and underground drilling program continues to expand the high-grade Ag-Au bulk tonnage zones at the Plomosas Mine Area. The lower levels of the historic Plomosas Mine had seen only limited drilling by previous operators, oriented primarily towards exploitation of only Pb-Zn mineralization rather than the high-grade Ag-Au mineralization recently being discovered by GR Silver Mining. Our recent drilling, including highlighted intercepts in this release of 21 m at 466 g/t AgEq, 84 m @ 74 g/t AgEq and 71 m at 48 g/t AgEq, confirms the presence of multiple, broad unmined Ag-Au rich zones. These results are evidence of the potential bulk tonnage scale of the high-grade mineralizing system at the Plomosas Mine Area. They also demonstrate the opportunities that lie ahead for the Plomosas Project with additional core drilling programs to follow the upcoming resource estimates.”

Drill holes reported in this News Release successfully confirmed and expanded the high-grade, bulk tonnage silver mineralized zones at the Plomosas Mine Area. Drilling by the Company in the lower levels of the historical mine area, where there is limited previous underground drilling, has consistently intercepted multiple broad zones of disseminated galena (Pb) and sphalerite (Zn) mineralization, in addition to multiple sub-parallel Ag-rich banded quartz epithermal veins, located on both the footwall and hanging wall of the Plomosas Fault. These drill holes are extending the footprint of the high-grade, bulk tonnage zone along strike and down-dip. Best intercepts from drill holes in these zones are shown in the tables below.

The following table (Table 3) summarizes the collar locations for drill holes reported in this News Release.

The Ag-rich mineralization in PLI21-07 is represented by NW oriented crustiform-banded silica-rich epithermal veins, crosscutting or subparallel to the N-S oriented Plomosas Fault (see link to Core Photos). The Plomosas Fault commonly hosts high-grade Ag-Au-Pb-Zn hydrothermal breccias, with evidence of multiple stages of brecciation and mineralization within the Plomosas Mine Area. The  hydrothermal breccias rich in base metals appear to indicate an early stage mineralized system, which has undergone reactivation and remobilization. The crustiform-colloform veins yield a precious metals-rich epithermal system with potential for high grade mineralization at depth. A NE oriented fault system also demonstrates potential for high-grade Au mineralized zones with indications in places of an association with copper mineralization. At some underground levels, where all three structural systems intersect, the presence of wide, potentially bulk mineable mineralized zones are common.

Preliminary processed results of ground magnetic and IP geophysical survey data have recently indicated significant multiple shallow anomalous zones in the vicinity of the Plomosas Mine Area. IP and magnetic anomalies may be related to shallow sulphide-bearing mineralization, in and around the modelled resource area, expanding the potential footprint of the mineralized system, (Figure 1).

GR Silver Mining believes that the Plomosas Project represents a district-scale mineralized system. The Company is carrying out a 11,900 m diamond core drilling program and plans to complete a resource estimation in two areas (Plomosas Mine Area and San Juan Area) in the second quarter of 2021. Work to date by the Company has resulted in the  successful expansion of the known zones of mineralization within these two areas. The Plomosas Mine Area displays evidence of a 600 m long epithermal system, potentially extending up to 1.2 km, whereby multiple veins and discoveries have defined a much larger high-grade Ag and Au mineralized footprint. Through surface exploration and drilling, the San Juan Area, initially thought to consist of only one 400 m long epithermal vein, now appears as a 2 km long epithermal system, consisting of at least six epithermal veins.

The integration of the Plomosas Project and the San Marcial Project, together with concessions under acquisition adjacent to these projects, provides the company full control of the major structural corridors on the eastern edge of the Rosario Mining District. During 2021, GR Silver Mining continues to explore new mineralized zones, close to surface, within these exploration concessions, providing potential for additional resource growth.

The Company is carrying out a drilling program with surface holes focused on expanding known mineralization along strike in two initial areas, the Plomosas Mine Area and the San Juan Area. Underground drilling included in the program will target the extension of recent Au-rich discoveries at the lowest level (775 m RL, or ~250 m below surface) of the Plomosas Mine Area and six low sulphidation epithermal veins at the San Juan Area. Both areas will be the subject of NI 43-101 resource estimations following completion of this drill program.

The silver-gold mineralization on this Project displays the alteration, textures, mineralogy and deposit geometry characteristics of a low sulphidation epithermal silver-gold-base metal mineralized vein/breccia system. Previous exploration was focused on polymetallic (Pb-Zn-Ag-Au) shallow mineralization, hosted in NW-SE structures in the vicinity of the Plomosas mine. The E-W portion of the mineralization and extensions of the main N-S Plomosas Fault remain under-explored.

San Marcial is a near-surface, high-grade silver-lead-zinc open pit-amenable project. The Company filed a National Instrument 43-101 report entitled “San Marcial Project Resource Estimation and Technical Report, Sinaloa, Mexico” having an effective date of March 18, 2019 and an amended date of June 10, 2020 (the “Report”), which contains a 36 Moz AgEq (Indicated) and 11 Moz AgEq (Inferred) resource estimate. The Report was prepared by Todd McCracken and Marcelo Filipov of WSP Canada Inc. and is available on SEDAR. The company recently completed over 320 m of underground development in the San Marcial Resource Area, from which underground drilling is planned to expand the high-grade portions of the resource down-dip. The Company recently discovered additional mineralization in the footwall, outside of the existing resource, and will also be drilling this area. GR Silver Mining is the first company to conduct exploration at San Marcial in over 10 years.

Plomosas and San Marcial collectively represent a geological setting resembling the multimillion-ounce San Dimas Mining District which has historically produced more than 600 Moz Ag and 11 Moz Au over a period of more than 100 years.

GR Silver Mining’s other projects are situated in areas attractive for future discoveries and development in the same vicinity of Plomosas and San Marcial in the Rosario Mining District. The recently announced Share Purchase Agreement (see News Release February 1, 2021), to acquire Marlin Gold Mining Ltd., consolidates the business strategy to control the most important silver and gold assets in the multi-million ounce historic Rosario Mining District. The acquisition is expected to close on March 31, 2021, when GR Silver Mining will control a concession portfolio of over 1,000 km2, two previously producing mines fully permitted for future developments and a total combined 75 km of structures with field evidence of 24 Ag-Au veins in historic old workings. 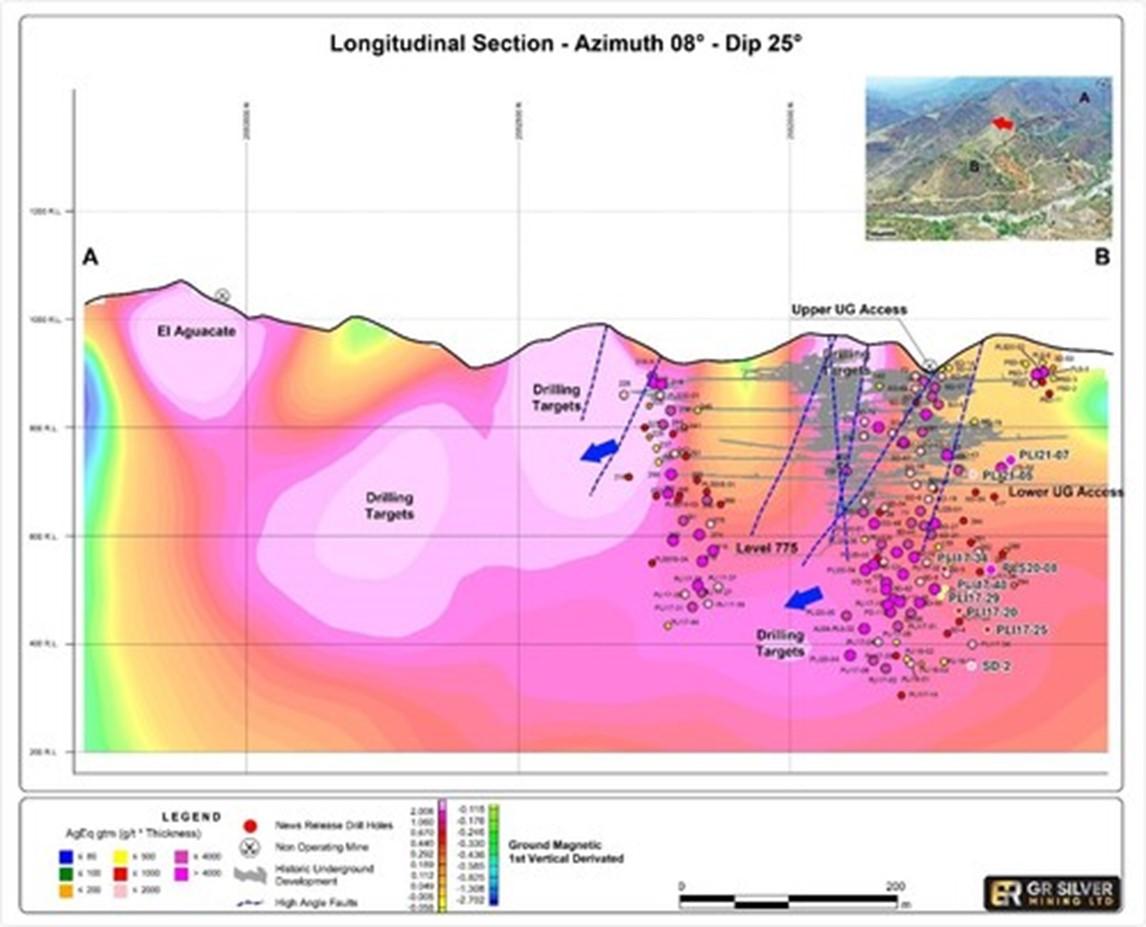