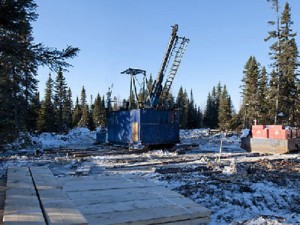 Gowest Gold Ltd. (TSX-V:GWA) (OTCBB:GWSAF) is pleased to report that it has finalized an agreement to acquire two mining leases (12 claim units) covering 193 hectares (1.93 sq km) adjacent to the eastern portion of the Company’s wholly-owned Bradshaw Gold Deposit on the Frankfield Property, part of the Company’s North Timmins Gold Project. Formerly known as the White Star property, the surface rights (81 hectares) accompanying these newly acquired leases provide additional land needed for the infrastructure to be built around Gowest’s planned mine at Bradshaw, including room for the planned waste rock dump and settling ponds.

In 2006, Gowest conducted shallow diamond drilling (three holes totaling 1,180 m) on the White Star leases under a previous option and prior to the current resource expansion of the Bradshaw deposit to NI 43-101 standards. Gowest has since developed a clearer understanding of the gold mineralization at Bradshaw, which will better allow the Company to focus on the recognized potential to extend eastward across the White Star leases.

The leases are to be acquired pursuant to the terms and conditions of a purchase agreement entered into between J. Patrick Sheridan, New Texmont Explorations Ltd. and the Company. The purchase price payable by the Company for the leases will be the grant to the Vendor of a sliding scale net smelter return royalty in respect of gold production from the relevant properties equal to 1.0% at gold prices less than US$950 per ounce and 1.5% at gold prices equal to or greater than US$950 per ounce. Pursuant to the purchase agreement, the Vendor will immediately following closing assign and transfer all of his right, title and interest in and to the NSRR to New Texmont. The NSRR will be subject to the same terms and conditions as previously granted by the Company to New Texmont as set out in an Acquisition Agreement dated December 19, 2008 between the Purchaser and New Texmont.

The Company also announces that it intends to issue, subject to TSX Venture Exchange approval, an aggregate of 250,000 common shares to non-management directors of the Corporation (50,000 common shares per director), as partial payment of fees owed to such directors in respect of the quarter ended October 31, 2013. The aggregate deemed value of the common shares to be issued is $12,500.00. The shares are being issued in lieu of cash in order to conserve the cash resources of the Corporation.

Gowest is a Canadian gold exploration and development company focused on the delineation and development of its 100% owned Bradshaw Gold Deposit on the Frankfield Property, part of the Company’s North Timmins Gold Project. Gowest is exploring additional gold targets on its 109-square-kilometre NTGP land package and continues to evaluate the area, which is part of the prolific Timmins, Ontario gold camp. The latest updated resource estimate for Bradshaw included approximately 945,600 ounces of gold (“Au”) in the Indicated category (6.0 million tonnes at a grade of 4.9 grams per tonne (“g/t”) Au) and 536,800 ounces of gold in the Inferred category (3.7 million tonnes at a grade of 4.2 g/t Au). As was used in the Company’s Preliminary Economic Assessment, the current estimate is based on a 3.0 g/t Au cut-off and a conservative gold price of US$1,200/oz. This resource estimate has been completed by Neil N. Gow, P. Geo., an independent Qualified Person, and reported in accordance with Canadian Securities Administration National Instrument 43-101 (“NI 43-101”) requirements and CIM Standards on Mineral Resources and Reserves.