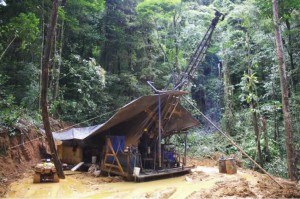 Ioannis Tsitos, President, commented, “We continue working to balance throughput volumes with quality of recovery to achieve our goal of free cash flow from operations. In September, we began to see an increase in gold production with improvements in recovery of higher grade mine feed. During Q4, we will be replacing critical pipelines and pumps for improved efficiencies. We look forward to continued improvements in the following months with our focus on achieving operational free cash flow.”

While the average grade has improved substantially with the arrival of the 40-tonne truck and the commencement of production from Pit 4, optimization work to balance quantity of tonnes with quality of recovery continues on the process plant. In September, Goldsource retained the services of Sepro Mineral Systems Corp (“Sepro”), the manufacturer of the Eagle Mountain plant, to perform a process audit. Sepro completed the process audit September 18, 2016 and provided recommendations to improve the process plant performance and recovery. In addition, Goldsource has hired an experienced process engineer to focus on further optimization of recovery and performance of the process plant.  Preparations for a night shift have commenced, with a partial night shift to be phased in during Q4 2016 and a full night shift expected to be in place within the next six months.

Goldsource plans to release its Q3, 2016 unaudited Condensed Consolidated Interim Financial Statements and Management’s Discussion & Analysis – Quarterly Highlights after market close on November 24, 2016. The Qualified Person under National Instrument 43-101 – Standards of Disclosure for Mineral Projects for this news release is N. Eric Fier, CPG, P.Eng, and Chief Operating Officer for Goldsource, who has reviewed and approved its contents.