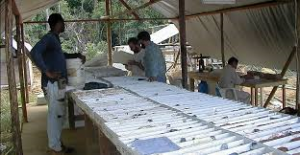 Goldsource Mines Inc. is pleased to announce that a total of 5,131,000 warrants issued in February 2014 and December 2014, and expiring February 28, 2017 and December 12, 2017 respectively, were exercised early for gross proceeds of CAD$1,240,875. Of the warrants exercised, a total of 3,533,500 were exercised by insiders of the Company. The Company will use the gross proceeds for working capital and accelerating planned expansion of production at its Eagle Mountain Gold Mine located in Guyana, South America.

Yannis Tsitos, President, commented, “We would like to thank these shareholders for their continued support. The funds will help to complete the commissioning phase for scheduled commercial production in Q2 and accelerate planned production with the inclusion of a second operating shift. The Company currently has CAD$1.4 million cash and has commenced generating revenue from operations.”

An update on operations commissioning of the Eagle Mountain Gold Mine will be released on Wednesday, April 20, 2016.

Goldsource Mines Inc. is a Canadian resource company that is progressing its advanced-stage, 100%-owned Eagle Mountain Gold Project, located in Guyana, towards initial staged production in Q2 2016. Goldsource is led by an experienced management team, proven in making exploration discoveries and achieving project construction on time and on-budget.