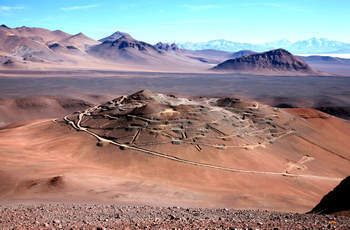 Goldrock Mines Corp is pleased to announce the results of a positive Feasibility Study by Kappes, Cassiday & Associates, Mine Development Associates and AMEC Americas Limited to develop its 100% owned and permitted Lindero gold deposit in the Salta province, Argentina. The economic assessment for the Feasibility Study estimates the project will produce an average of 109,000 ounces of gold per annum for the first 9 years of the mine life with a total life of mine production of 1.037 million ounces.

Highlights of the Feasibility Study include:

Although the mineral resources currently outlined on the Lindero Project could support a significantly higher mining rate and production profile, it is the Company’s preference to build a low capital cost and smaller footprint operation. This initial lower risk mining and processing scenario will act as a foundation for future production growth and will also provide the Company with the opportunity to fund possible future expansions including the evaluation and possible development of the adjacent Arizaro deposit from internally generated cash flow.

Paul Matysek, President and CEO, commented “The completion of the Lindero Feasibility Study marks an important milestone towards our goal of becoming a gold producer. We are pleased to be able to deliver a technically and financially robust project with modest capital requirements, a shorter construction schedule and an accelerated time-line to positive cash flow generation. It is also noted that the project’s after-tax NPV of US$215M (using a $1,400 gold price) is over 5 times our current market capital ($42.6M @ $0.65 per share). The project is already permitted for development and has strong Salta provincial government and community support. Salta is a mining friendly jurisdiction that wants Lindero to be the first gold mine to be put into production in the province (Argentina is the 12th largest producer of gold in the world).  With the completion of the Feasibility Study and project permitting, the Company is now focused on funding alternatives for the project.”

The three-year trailing average gold price at December 31, 2012 was US$1487. The Company used a base case gold price of US$1,400 per ounce of gold for this Feasibility Study. The base case financial analysis indicates an after-tax IRR of 33.4% generating $57.4 million average annual after-tax cash flow7 (first 9 years) and a payback period of 2 years.

Downside and upside sensitivity cases indicate that the project generates a 21.7% after-tax IRR at US$1,200 per ounce gold price, 27.6% at US$1,300 per ounce, 39.0% at US$1,500 and 44.5% at US$1,600 per ounce of gold, indicating that project returns are both robust at historical gold prices and positively leveraged to higher gold prices. Leverage to various prices of gold is detailed in Table 2 below.

The Lindero Project is located 250 km due west of the city of Salta, northwestern Argentina. Access is by all-weather road either from the City of Salta or alternatively from Chile. The project is in the sparsely populated Puna district, however the area is well serviced with infrastructure including, an airstrip, national and provincial roads, gas pipelines and an international railway line. The railway joins the city of Salta with the village of Tolar Grande (approximately 75 km from the project) and the deep-sea port of Puerto Angamos (Antofagasta) on the Chilean coast.  The line is currently operational with a weekly service.

A review of power sourcing options during the Feasibility Study indicated that natural gas-fueled generation is the most technically viable and efficient option for the Lindero Project. Power will be generated utilizing natural gas supplied by a connection to the regional Gasoducto de la Puna gas pipeline built by the Salta government to encourage mining and other economic development in the Puna region. Natural gas is available at a point in the village of Pocitos, approximately 160 km by road from the mine site. A “Virtual Gas Pipeline” is proposed for Lindero which consists of a mother station installed in Pocitos (at the source), comprising two compressor/refrigeration units, a receiving station installed at the mine site, four trailer trucks to transport the natural gas.

Water for the Lindero Project will be supplied from four wells; two located on site near the accommodation camp and two located about 13 km to the east of the site in the Chachas area. Production available from the two on-site wells is estimated at approximately 50 m3/hr, with an additional 140 m3/hr available from the two off-site wells. It is assumed that only one of the two off-site wells will be operating at any given time (with the other on standby) to meet anticipated project needs with the total water supply capacity approximately double (190 m3/hr) the projects requirements of approximately 95 m3/hr.

The mine development has been planned as an open-pit mine with conventional haul trucks, hydraulic shovels, and front-end loading equipment.  The mine starter Phase 1 and 2 pits, which have low material movement requirements (stripping ratio of just 0.48:1) will be mined by a contractor, while owner mining equipment will be used for pit Phases 3 and 4.  The changeover to owner mining equipment is planned for year 3. Drilling and blasting will be undertaken by the owner through the life of mine to minimize risks to ore quality and mining contractor performance. The life of mine stripping ratio is 1.79:1. Ore will be trucked to a three stage crushing facility near the mine where it will be crushed to 80% minus 9mm and then conveyed to the heap leach pad.  Waste rock from the mine will be sent to a single dump located adjacent to the pit. The current production schedule uses a 0.35 g Au/t cut-off grade to define ore, which is higher than the economic break-even cut-off grade.  Mineralized waste is defined as Measured and Indicated resources above the economic cut-off and the reserve 0.35 g Au/t cut-off.  The mineralized waste is to be stockpiled on top of the waste dump with easy access for re-handle to the crusher. This material includes about 16.7 million tonnes at 0.30 g Au/t or 162,000 contained ounces of gold and this material could potentially be processed at a profit at the end of the mine life.

The conventional heap leach facility for the Lindero Project is designed for a nominal production rate of 6,750,000 metric tones (Mt) per year (18,750 Mt per day) with a total heap capacity of approximately 68 Mt at a nominal crush size of 80% passing -9 mm. The ore will be fine-crushed using three-stage crushing with a circuit consisting of a primary jaw crusher, secondary cone crushers and an HPGR crusher. It will then be conveyor-stacked on the leach pad in 10 m lifts. 250 ppm sodium cyanide solution will be irrigated over the stacked material, via buried drip emitters at 10 L/m2/h during a 150 day leach cycle. – 75 days open circuit, 75 days recycled leach solution (during the first three years of the operation). The recycled solution enables the optimal design of solution ponds and downstream plant volumes. After three years of this configuration, there is a planned change over to all open circuit with no recycled solution.

Gold is recovered from a heap leach pregnant solution via carbon adsorption-desorption facility (ADR plant). Lime will be used for pH control of the cyanide solution, and has been calculated at  2.5 kg/t, a conservative value for the ore which demonstrates a neutral to alkaline pH. Cyanide consumptions are estimated to be 0.45 kg/t NaCN.

Gold recoveries used in the Feasibility Study were developed using results from five stages of laboratory column test work (over 50, 1.5 to 5 metres columns) that were adjusted downwards to compensate for actual heap performance. Overall life of mine gold recovery is projected at 68.3%.

The deposit has minor copper mineralization dominantly hosted in chalcopyrite, a mineral with a low copper dissolution to cyanide solutions. Testwork did not show a significant effect on gold leaching kinetics as a function of copper present and pregnant solution testwork showed minimal copper accumulation. However, the Lindero circuit has included the design of a SART (sulphidisation–acidification–recycle–thickening) plant if required because of a gradual build-up of copper in the pregnant leach solution.  Whilst not included in the project initial capital estimation, a SART plant would produce copper as a byproduct and reduce the projects cyanide cost and potentially be utilized for the treatment of the Arizaro deposit ore which has a higher copper content than Lindero (if a mineral resource and a mineral reserve is delineated at this adjacent deposit).

For the Feasibility Study, Goldrock retained AMEC to complete a re-tabulation of the Mineral Resources for the Lindero heap leach gold project, previously estimated by AMEC in 2009. The Mineral Resource estimation is based on a block model that includes 17,753 samples from 121 core holes (34,656 m) and 32 trenches (1,268 m). The block grade estimates and Mineral Resource classification have not changed from the previous AMEC study (please refer to the Company’s press release dated May 6, 2010, Filing of NI 43-101 Technical Report for Lindero Pre-Feasibility Study for more details).

In October 2011, the Company has received notice from the Salta Provincial Government that it had granted the environmental permit (Declaracion de Impacto Ambiental) allowing the Company to develop the Lindero open pit, heap leach gold mine. This is the primary permit required for project development. The project has received strong local and provincial community and government support. Lindero is the first bulk tonnage open pit gold deposit to be permitted in Salta Province.

Discussions are advancing with a number of project debt, equity, equipment and other finance providers to finance Lindero to full production. With the Feasibility Study now completed, the Company will move aggressively to finalize project financing and commence project development.

The current project tax consideration includes a 4.76% export tax charge and this full amount has been included in the Feasibility Study financial analysis. For mineral products produced in the isolated (undeveloped) Puna region of Argentina a reimbursement of part of the export tax is possible. Presently, the reimbursement is 2.5% and, set forth by Resolution No. 762/93 of the Ministry of Economy, the overall export tax would thus be reduced to 2.26%. Reimbursements of the export tax is allowed in two circumstances; a) for certain exported minerals or product extracted from the Puna region, or b) for materials elaborated from mineral substances extracted from the Puna region. Currently gold-silver doré is not included in the list of mineral products to which this reimbursement applies however, the Company has started a process to have gold-silver doré recognized as an approved Puna mineral product.  If successful, this tax rebate (2.5%) would be US$24 million over the current life of mine plan.

Increases in Mineral Reserves and mine life may be achieved if additional resource definition drilling to investigate continuity of the mineralization classified in the resource model as Inferred is undertaken, and if this drilling is successful in moving this Inferred material into the Measured and Indicated category.  Currently in the mine plan using a 0.25 g/t Au cut-off there is approximately 10.4 Million tonnes @ 0.45 g/t Au of Inferred Resources (149,000) ounces which is classified as waste for scheduling and cash flow purposes. The majority of the material (93%) is located in pit phases III and IV. An allowance for exploration drilling has been provided for in the project capital expenditure.

The mine planning is based on the use of an elevated cut-off grade with the stockpiling of material below this cut off undertaken.  In the current mine plan, a total of 16.7 M tonnes of mineralized waste @ 0.30 g/t Au (162,000 ounces) is stockpiled. Depending on the price of gold and the operating cost regime at the end of the mine life, this material maybe economical to treat, adding significant life of mine gold production.