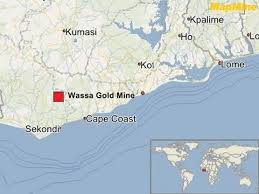 Golden Star (TSX:GSC) (NYSE MKT:GSS) (GHANA:GSR) is pleased to announce the results of its Preliminary Economic Assessment on the development of an underground mining operation at its Wassa mine in Ghana.

Additional debt funding to develop the Wassa Underground mine, as announced last week, supplements cash and an existing facility to fund this project.

All references to “$” in this news release are to United States dollars.

Golden Star will be giving a presentation at the Denver Gold Show on Wednesday 17, September 2014, to discuss these results. Details of the presentation and webcast thereof are provided at the end of this release.

Sam Coetzer, President and CEO of Golden Star commented:
“The exceptionally strong results of this PEA on the Wassa mine demonstrate that we have made good progress in the execution of our strategy to transform Golden Star into a lower cost producer. Furthermore, our confidence in these results is evident in our decision to commence the construction of a decline at Wassa in early 2015. I am convinced that we are now well on our way to deliver significantly enhanced value to our shareholders.”

The Wassa gold mine is in the Western Region of Ghana. It has a carbon-in-leach processing plant with a rated capacity of 2.7 million tonnes per annum (“mtpa”). Golden Star has been mining the Wassa open pits since commissioning the plant in 2005. Mining is currently at the Wassa Main pit, which is within 500 meters of the plant.

Drilling below the Wassa Main pit has been ongoing since late 2011. This drilling has been successful in increasing the Wassa Mineral Reserves by 148%.

In early 2014, SRK Consulting (UK) Ltd was awarded the contract to prepare a preliminary economic assessment to determine the economic viability of an underground mine beneath the Wassa Main pit. An underground mine is envisioned in the PEA that will operate in conjunction with the existing open pit mine for five years. Thereafter mining from the open pit will cease and mining will be solely from the underground mine for the remaining six years of operation.

The PEA assumes the use of mining contractors in the underground mine and owner operated mining in the open pit. A gold price of $1,300/oz. was used in the economic modeling as well as the base case for the pit and underground optimizations.

The PEA is based on an updated mineral resource model which has incorporated all of the recent drilling including infill at depth as well as step out to the south of the Wassa Main Pit. The updated resource statement for the open pit has been constrained by a $1,400/ oz. optimized Whittle pit shell that was limited to the 820 meter elevation and is approximately 150 meters below the current mining benches. The underground mineral resources include material below this pit at an economic cutoff grade of 2.27 g/t Au.

The updated Measured and Indicated Mineral Resources are slightly less than those reported at 2013 year end due to seven months of mining depletion and a change of approach from an open pit method to combined open pit and underground mining. However the Inferred Mineral Resources have added approximately 1 million ounces of material below the open pit.

The updated PEA Mineral Resource has been estimated by SRK Consulting (Canada) Ltd and reviewed by the Company’s technical personnel in accordance with guidelines set out in the Definition Standards for Mineral Resources and Mineral Reserves published by the Canadian Institute of Mining, Metallurgy, and Petroleum and as required by Canada’s National Instrument 43-101.

Notes to the Measured, Indicated and Inferred Mineral Resources:

The success of the step out drilling has demonstrated the high grade shoots are structurally controlled and related to earlier folding. The results of the two step out drill hole fences, which were included in the PEA resource model update, have resulted in the approximate million ounce increase in the Inferred Mineral Resource. The last fence drilling on section 19100 north intersected significant wide zones of high grade gold mineralization which confirms the mineralization is open to the south of the current model limits. The addition of a million ounces of Inferred Mineral Resource from two drill fences testing the down plunge extensions of the gold 400 meters to the south justifies the need for further step out drilling. The company has planned another 200 meter step out drill fence to the south of the last deep drilling on 19100 north and will commence drilling in the later part of 2014.

A summary of the capital costs and timing thereof from the PEA are summarized below:

Pre-production incremental capital costs for the underground mine are estimated to total $41 million including $8 million in contingency capital. The bulk of this expenditure is the $24 million in underground development which includes the development of an underground decline to about 300 meters vertical depth and four levels of lateral development designed to open up multiple working faces and allow flexibility within the mine plan.

Minor modifications to the Wassa processing plant are estimated to cost $2 million. A substantial portion of the budgeted infrastructure capital will be spent on a new tailings storage facility, which was already planned for the open pit mine.

Economic Summary and Sensitivity to Gold Price and Discount Rate

A summary of the production and operating metrics for the combined open pit and underground mines and resulting operating costs from the PEA are summarized below:

Golden Star has been mining the Wassa open pits since 2005. Prior to 2013, mining was in a number of smaller satellite pits which were combined into a single large Wassa Main pit in late 2013. This allowed for operational efficiencies and cost savings.

A decision has been taken by the Board to commence a Feasibility Study (“FS”) and the construction of a development decline from the bottom of the Wassa Main pit in early 2015. A production decision will be based on obtaining the necessary permits and environmental approvals.

The decline will be positioned to follow the plunge of the underground target about 60 meters in the footwall. Close to the start of the decline a ventilation raisebore will be driven to provide an exhaust airway for the first phase of underground mining. As the decline is driven down, sublevels will be developed at a vertical spacing of 25 meters. These sublevels will allow access to the mineralized target for longhole open stope mining. The mineable resource varies in width from 15 to 70 meters. Wider areas will be mined using transverse methods; while narrower will be mined longitudinally. The mining sequence will be bottom-up primary-secondary stoping and stopes will be filled with cemented waste backfill. The mine will be operated by a contractor using a full suite of mechanized equipment.

First production is expected from the underground mine in early 2016.

The underground mine design assumes a total internal and external dilution of 28% and a mining recovery of 95%.

The Wassa processing plant was constructed in 2005 and is currently operating at its rated capacity of 2.7 mtpa. The plant is 500 meters from the current open pit mining operations. Processing currently includes a three stage crushing, grinding, gravity recovery, carbon in leach circuits and a thickener. A final recovery circuit using electrowinning is also in place along with associated secure gold room facilities. Average recoveries since mining has been in fresh rock have been 93% and future recoveries from combined open pit and underground operations are estimated to be at this level.

Although no development decision has been reached for the Wassa Underground Mine, Golden Star’s Board believes that the economic case presented in the PEA coupled with the straightforward brownfield nature of the project merit the advancement of the project to a FS.

Golden Star will shortly commence this FS which has been awarded to SRK and will build on and optimize the results from the PEA. The study is expected to be completed in early 2015. Future work will include further infill drilling, detailed geotechnical drilling, further metallurgical test work and hydrology studies as well as tendering of operating and capital costs. A decision has been taken to commence the construction of an exploration decline from the bottom of the Wassa Main pit in early 2015.

Management believes that with additional drilling from underground there is an opportunity to firstly optimize the mine plan and secondly to potentially add more ounces to the resource base. However there is no certainty that additional drilling would result in all or any such ounces being included in a mine plan.

Golden Star has not yet completed a FS to demonstrate the economic viability of Wassa Underground. Furthermore, no Mineral Reserves have been established on Wassa Underground. Any statements regarding planned production rates, projected cash flows, payback period, IRR, NPV assume that Golden Star is or will be able to complete all of the required steps to bring Wassa Underground into commercial production including the completion of a FS to demonstrate the economic viability of the Wassa Underground, the completion of the environmental assessment process and the successful granting of relevant permits. There is no certainty that Golden Star will be able to complete any or all of these steps.


Golden Star Resources is an established gold mining company that holds a 90% interest in both the Bogoso and Wassa gold mines in Ghana. The Company also has a 90% interest in the Prestea Underground mine in Ghana. Golden Star has Mineral Reserves of 3.9 million ounces and 6.0 million ounces in Measured and Indicated Mineral Resources. In 2013, Golden Star sold 331,000 ounces of gold and in 2014 the Company expects to produce 260,000 – 280,000 ounces. The Company offers investors leveraged exposure to the gold price in a stable African mining jurisdiction with exploration and development upside potential.