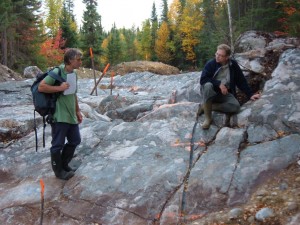 Golden Share Mining Corporation (TSX VENTURE:GSH) is pleased to announce that it has initiated a first pass diamond drilling campaign on its Berens River project.

The holes will also target Veins No.19 and 10 located directly to the north of Vein No.3.

The Berens River property is located 200 km north of the city of Red Lake, Ontario, and consists in 21 unpatented mining claims covering 37.6 km2. The past producing Berens River Mine was operated by a subsidiary of Newmont Mining from 1939 to 1948 and produced 158,000 ounces of gold and 5.8 million ounces of silver as well as 1.7 million pounds of zinc and 6.1 million pounds of lead. The historical production originates from Vein No.1, which was mined by shaft No.1 sunk to a depth of 990 m although no production has been recorded below the 518 m level. A second shaft was sunk to a depth of 232 m on Vein No.3 but has not yet entered into production.

The Berens River Mine gold-silver mineralized system comprises 10 strongly silicified hydrothermally altered zones (historically called “Veins”) developed in steeply dipping, fracture-shear-fault systems with a general strike of 110 degrees and a 75 degrees dip towards the SSW that cross-cut the stratigraphy at a high angle. The zones show thicknesses up to 4.50 m with lateral extents of up to several hundred meters.

About Sandy Lake and Ackewance

The Berens River project is located on the Sandy Lake First Nation traditional territory. Golden Share has held several meetings with Sandy Lake since acquiring the Berens project and in September 2012, Sandy Lake representatives confirmed the endorsement of a gradual approach that would be implemented in stages according to the phases of development of the project.

Further to the agreement with Ackewance, a diamond drill was mobilized on the Berens River Mine site this past winter and an agreement was obtained from Sandy Lake to execute a first pass diamond drilling program on the property.

Golden Share Mining Corporation is a Canadian-based mining exploration company developing a promising portfolio of properties in the mineral belts of eastern Canada with a development strategy focused on a well-balanced property portfolio in a politically stable environment with a history of rich mineral endowment.

On July 25, 2013 shareholders of the Company approved the merger with Silvore Fox Minerals Corp. a Canadian junior explorer listed on the TSX Venture Exchange.

Golden Share’s merger with Silvore Fox seeks to leverage the input of Sinotech Minerals Exploration Co. Ltd. a leading Chinese mineral exploration and development company. Sinotech is a 50.03% shareholder of Beijing Donia Resources Co. Ltd., which by virtue of the merger transaction, has become Golden Share’s largest shareholder with approximately 21.9% of its issued and outstanding shares.

Sinotech recognizes the value of Golden Share’s well balanced portfolio of gold properties located in Quebec and Ontario and sees the merged entity as an ideal platform to further develop its activities in exploration and development of precious metals in North America, and notably in Eastern Canada, a politically stable environment with a history of gold endowment.

Sinotech’s new structure was established in 2004 with the clear objective to become a leading emerging metal producer. Its headquarters are located in Beijing and Sinotech currently owns more than one hundred minerals projects all over the world with direct involvement in the development of over twenty subsidiary companies. Sinotech has established partnerships with all major Chinese gold producers. It currently operates four mines in China for a variety of metals including gold, silver, copper, lead, zinc, molybdenum and iron generating a revenue over Yuan 500 M ($US 81 M) per year. In addition, two other mines are currently under construction. On the exploration front Sinotech has invested over Yuan 800 M ($US 130 M) in mainland China over the past three years. Overseas, Sinotech has been actively pursuing exploration and mining opportunities with strategic direct and indirect investments in five TSXV and two ASX listed, well-funded, junior explorers developing projects for gold, base metals and nickel in Africa and North America.