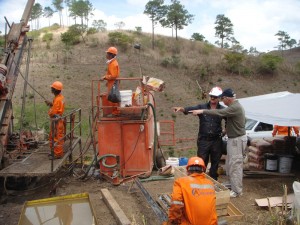 The San Albino Gold Deposit, outlined after only 15 months of drilling, is a high-grade, near surface open-pit/underground resource with significant expansion potential. All three mineralized zones at the San Albino Gold Deposit are open both at depth and along strike. The upper, San Albino zone lies within 100 metres of surface and has only been tested and extended down-dip for 250 metres. The underlying, parallel Arras mineralized zone has already been traced 925 metres down-dip.

Only a small portion of the San Albino Gold Deposit, roughly 0.6 square kilometres of a total 2.0 square kilometre area, has been drill tested and comprises the current resource. The NI 43-101 technical report and resource estimate is available on www.sedar.com or the Company’s website at www.goldenreign.com.

Presently, the Company has identified 40 drill sites for the planned 2013 diamond drilling campaign.