The Company has now received the remaining assay results for 12 DD holes completed in June and all assays from 19 DD holes drilled recently, totaling 1,825 meters. This third phase drill program followed up on the positive results obtained at the ‘Sico’ epithermal target drilled in 2021 and 2022 as part of an option agreement with Cascadero Copper Corp. Drill results for 2021 were reported on January 19, 2022 [Link], and partial drill results for the second phase DD holes were reported on August 3, 2022 [Link]. The recent DD campaign was completed in early October 2022. Highlights from the latest 31 DD holes drilled in the Sico epithermal targets include:

The recent results confirm the mineralization at Sico is concentrated on the eastern flank of the prospect, and the drilling to date has intercepted a mineralized footprint of approximately 300m x 120m with potential to expand in multiple directions. Current observations suggest the mineralization trend is heading northeast and west-southwest of the discovery section (SE21008 & SE22011). The Company has planned a follow up drilling campaign to test the trend of the mineralization, to follow up on the open trends, and to increase the size of the mineralized zone as well as to test targets to the north. Recent trenching to the north of the Sico prospect has uncovered quartz-hematite veins which appear mineralized and which have been sampled and sent for analysis.

Mineralization at Sico is hosted in near-surface iron-oxide bearing veins, veinlets and fractures within Tertiary volcanic rocks. Recently completed testing for cyanide extractability of gold shows excellent recoveries averaging 89%. The prospect lies approximately 3km southwest of the Taca Taca copper porphyry deposit (owned by First Quantum Minerals) and 55km directly north of the currently producing Lindero gold mine (owned by Fortuna Silver). The mineralization at the Sarita Este prospect extends south onto the Desierto I & II concessions (2,498 hectares) where Golden is a controlling shareholder with an agreement in place to form a JV with Cascadero Copper.

Significant results are summarized in the tables below, with complete results available on the Company website at Golden Minerals – Sarita Este Property.

Note: Intervals in the table represent drilled length. Intervals and grades have been rounded to either one or two decimal places. Columns may not total due to rounding.

“The results for the latest drill campaign at Sico have continued to show encouraging results and evidence for the potential of an economic, near-surface oxide gold deposit. Initial metallurgical testing shows excellent results for cyanide extractability. The next phase of drilling will concentrate on expanding the known mineralization and continuing to test targets to the north, while the JV agreement for the Desierto I & II concessions is finalized,” said Warren Rehn, President and Chief Executive Officer of Golden Minerals.

Sarita Este is a gold-silver prospect located in the Puna region in Salta Province, north-west Argentina. The property is 100% owned by CCD through its subsidiary Salta Geothermal S.A. Golden Minerals is conducting exploration activities at Sarita Este as a part of a 2019 option agreement whereby it can acquire 51% of the 830-hectare property by spending $2.5M over four years and forming a JV with CCD. Golden has met the earn-in requirements and will proceed with forming the joint venture with CCD as specified in the option agreement.

The technical contents of this press release have been reviewed by Aaron Amoroso, a Qualified Person for the purposes of NI 43-101. Mr. Amoroso has over 15 years of mineral exploration experience and is a Qualified Professional member of the Mining & Metallurgical Society of America (QP Geology & Ore Reserves, 01548QP).

To ensure reliable sample results, Golden Minerals uses a quality assurance/quality control program that monitors the chain of custody of samples and includes the insertion of blanks, duplicates, and reference standards in each batch of samples.

DD drilling was conducted with a CSD 1800 diamond drill rig provided by Eco Drilling S.A. Holes were drilled at azimuths ranging from 0 to 315 degrees and a dip of -60 degrees. Drill holes were drilled to depths ranging from 30.1m to 100.5m. Local fresh water was used to flush, condition and recirculate within the holes. Holes were positioned with a hand-held GPS (accuracy +/- 5 meters) and will be surveyed with a Differential GPS once the campaign is completed. Sampling was conducted by qualified field assistants under the supervision of a geologist. The drilled core was photographed, measured, marked and cut into half and quarter core samples in lengths ranging from 30 centimeters to 2 meters. Diamond core was collected from the drill rig and logged by a geologist on-site at the core shack.

The Company has recently contracted the services of Alex Stewart International laboratories to keep all sample preparation and analysis within Argentina and avoid extended turnaround times. Analytical procedures for both laboratories used to analyze the drill core reported are explained below.

Drill-core was shipped to ALS Chemex’s sample preparation facility in Godoy Cruz, Mendoza, Argentina for sample preparation and for analysis at the ALS laboratory in Lima, Peru. The ALS Mendoza and Lima facilities are ISO 9001 and ISO/IEC 17025 certified.

The samples were crushed to 70% passing 2mm (PREP-31) and a split of up to 250 grams pulverized to 85% passing 75 micrometers (-200 mesh). The sample pulps and crushed splits were transferred internally to ALS Global’s Lima, Peru analytical facility for gold and multi-element analysis. Pulps (30-gram split) are submitted for Au analysis by Fire Assay with Atomic Absorption finish (Au-AA23) and silver samples were analyzed by an atomic absorption (Ag-AA62).

In-house quality control samples (blanks, standards, duplicates, preparation duplicates) were inserted into the sample set by Golden Minerals. Both laboratories conduct their own internal QA/QC program of blanks, standards and duplicates, and the results were provided with the Company sample certificates. The results of the control samples were reviewed by Golden Minerals and the Company’s QP and evaluated for acceptable tolerances.

All sample and pulp rejects are stored at the Company’s secure warehouse in El Quevar, Salta province, Argentina pending full review of the analytical data, and future selection of pulps for independent third-party check analyses, if required.

Golden Minerals is a growing gold and silver producer based in Golden, Colorado. The Company is primarily focused on producing gold and silver from its Rodeo Mine and advancing its Velardeña Properties in Mexico and, through partner funded exploration, its El Quevar silver property in Argentina, as well as acquiring and advancing selected mining properties in Mexico, Nevada and Argentina. 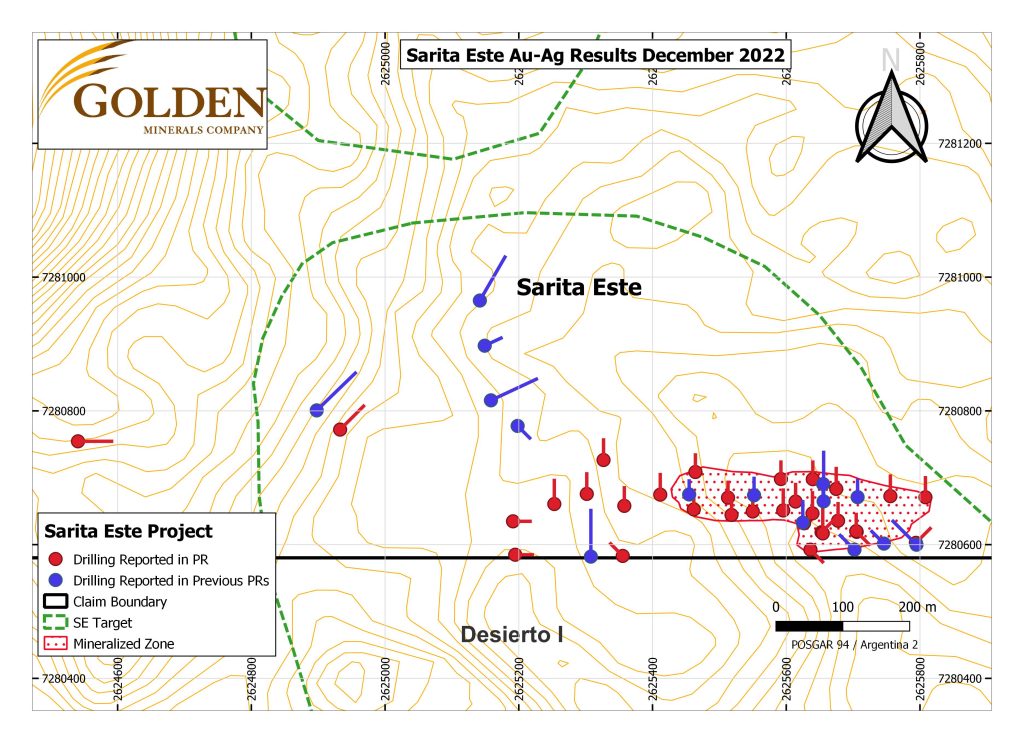