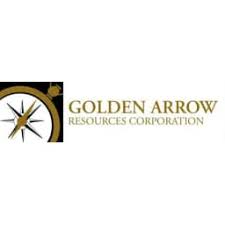 Golden Arrow Resources Corporation (TSX-V: GRG) (FSE: G6A) (OTCQB: GARWF), reports that it has received the final assays from its recent diamond drilling program at the Tierra Dorada Gold Project in Paraguay.  The Phase II program included 46 drill holes totaling 1791.80 metres testing the Alvaro and Itayuru prospects. Eight holes returned intervals of gold above 0.5g/t with a best interval of 2.6 metres averaging 5.17g/t gold.   Following a review of the results acquired to date, management has decided to discontinue funding and terminate the Company’s option agreement for the Project.

“Drilling at Tierra Dorada continues to hit anomalous values of gold, but the high-grade intervals remain short and discontinuous. Despite our efforts using a variety of regional and detailed exploration methods we have been unable to identify cohesive mineralization that we think will lead to an economic deposit. We believe that there is still prospectivity to the project but it will require a much larger and longer-term program to advance. For this reason, we have decided to terminate our exploration at Tierra Dorada and concentrate on our other projects, particularly San Pietro, where the identification of significant resources appears more likely and achievable in a shorter time frame,” commented Brian McEwen, VP Exploration and Development for Golden Arrow.

San Pietro Copper-Gold-Cobalt Project, Chile
The Company has designed its first exploration program at the newly acquired San Pietro project in Chile (see News Release dated March 17, 2022). The next six months will include re-logging of much of the 34,000 metres of historic drill core, detailed surface mapping and sampling, trenching, and an updated geophysical program.  This work will modernize and build the database for the main prospects, particularly the Rincones Zone, to refine the targets for a subsequent potential resource delineation drill program.

The first exploration program has been initiated at the 2,000-hectare Maquinchao. Due diligence sampling identified high-sulphidation epithermal signatures including silicified breccia outcrop over one kilometre with strong alteration and coincident gold, copper, and silver anomalies.  The program has started with a ground magnetic survey to map the structures and will include detailed surface sampling to identify additional anomalies.

The samples were shipped to Alex Stewart Assayers (Mendoza, Argentina), an internationally recognized assay service.  Samples were prepared and assayed at the facility at Mendoza, Argentina using fire assay with an atomic absorption finish on 50g aliquots. A 33 element analysis was performed by a four-acid digestion and detection by ICP-OES.

Golden Arrow follows industry standard procedures for the work carried out on Tierra Dorada Project, with a quality assurance/quality control (QA/QC) program. Blank, duplicate and standard samples were inserted in each batch of samples sent to the laboratory for analysis. Golden Arrow detected no significant QA/QC issues during review of the data.

The exploration programs are designed by the Company’s geological staff and results are reviewed, verified (including sampling, analytical and test data) and compiled under the supervision of Brian McEwen, P.Geol., VP Exploration and Development to the Company.  Mr. McEwen is a Qualified Person as defined in National Instrument 43-101 and has reviewed and approved the contents of the news release.

Golden Arrow Resources Corporation is a mining exploration company with a successful track record of creating value by making precious and base metal discoveries and advancing them into exceptional deposits. The Company is well leveraged to the price of gold, having monetized its Chinchillas silver discovery into a significant holding in precious metals producer SSR Mining Inc.

Golden Arrow is actively exploring a portfolio that includes an epithermal gold project in Argentina, a district‑scale frontier gold opportunity in Paraguay, a base-metal project in the heart of a leading mining district in Chile and more than 180,000 hectares of properties in Argentina.

The Company is a member of the Grosso Group, a resource management group that has pioneered exploration in Argentina since 1993.