Gold79 Drills 21.3m of 2.0 g/t Gold at the Tyro Target at Its Gold Chain Project in Arizona

Gold79 Drills 21.3m of 2.0 g/t Gold at the Tyro Target at Its Gold Chain Project in Arizona 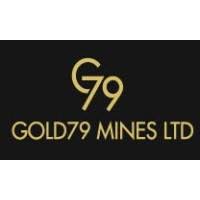 Gold79 Mines Ltd. (TSX-V: AUU) (OTCQB: AUSVF) is pleased to announce preliminary results for the first four drill holes (223 meters) from its recently completed 16 hole program at the Gold Chain project in western Arizona. The four holes highlighted in this release were drilled across the northernmost exposures of the Tyro target and tested broadly mineralized surface exposures at depths from 20 to 40 meters below the surface. Results from the remaining 12 holes (852m) are pending.

Mr. Derek Macpherson, President & CEO stated, “We are pleased to see the first four drill holes at Tyro reveal strong mineralization at shallow depths supporting the gold values from our preliminary surface sampling and trenching programs. These holes only tested approximately 200m of the 1 km target area at Tyro.” Mr. Macpherson continued, “Our ability to get these holes drilled a few days after signing the Tyro agreement is a testament to our team and the contractors that support us at Gold Chain.”

* All widths are down hole and not corrected for true thickness. True thickness is estimated to be about 80% of the mineralized width.

Mr. Robert Johansing, VP Exploration stated, “These results confirm continuity of this broad zone of quartz-adularia veins and veinlets at depth. Minor workings suggest that the vein was locally exploited for high-grade veins of greater than 10 g/t Au, leaving behind notable widths of gold mineralization of greater than 1 g/t Au in both the footwall and hanging wall. The vein system is open at depth and along the one-kilometer strike. The vein system appears to widen significantly to the southwest which will guide future drilling”.

All four RC holes in Table 1, were drilled from the hanging wall beneath surface vein exposures and limited mine workings at 50 to 60 degrees and encountered variable quartz veining over broad intervals (Figure 2). Surface exposures consist of discrete quartz-chalcedony-adularia-calcite veins up to 2 meters encompassed by a broad package of veins and veinlets. The wall rock for the entire Tyro target is a Precambrian granite which is strongly chloritized within the vein package; the vein system dips steeply to the southeast about 70 degrees. 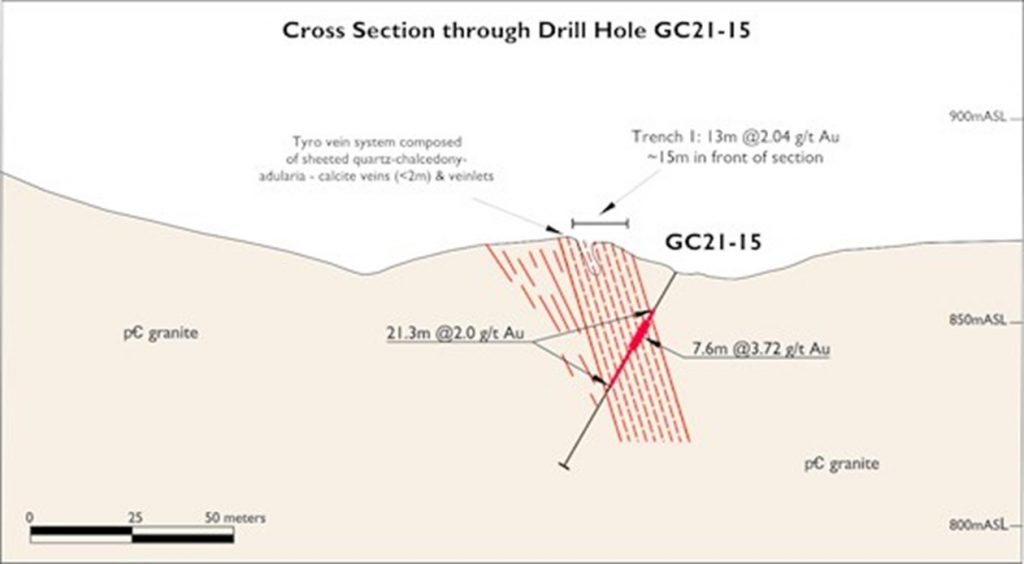 The Tyro mine was developed both initially underground and then as an open pit in the 1980s along a broad zone of quartz-chalcedony veins and stockwork hosted by Pre-Cambrian granite (Figure 3). The zone trends NNE, dips steeply and can be traced for over 1 kilometer. Open pit exposures reveal a width from 30 to 60 meters. Prior to 1930, a shaft was sunken to a depth of 500 feet with workings down to the 200-foot level; underground production was minimal and production from the open pit is not currently known. The vein terminates to the SW into a few NNW-trending rhyolite dikes (Figure 1) and appears to horsetail to the northeast (Figure 4). Meaningful gold values have been identified over its entire strike length. The Tyro target is referred to as a Type B target which are north-trending transverse structures to the northwest-trending mineralized zones which parallel and define the North Oatman trend. The North Oatman trend gold mineralization, composed of quartz-calcite-adularia-fluorite veins and veinlets, is spatially associated with the rhyolite dike complex for about 10km. Type B targets tend to host discrete veins, like Sunset and Tyro. 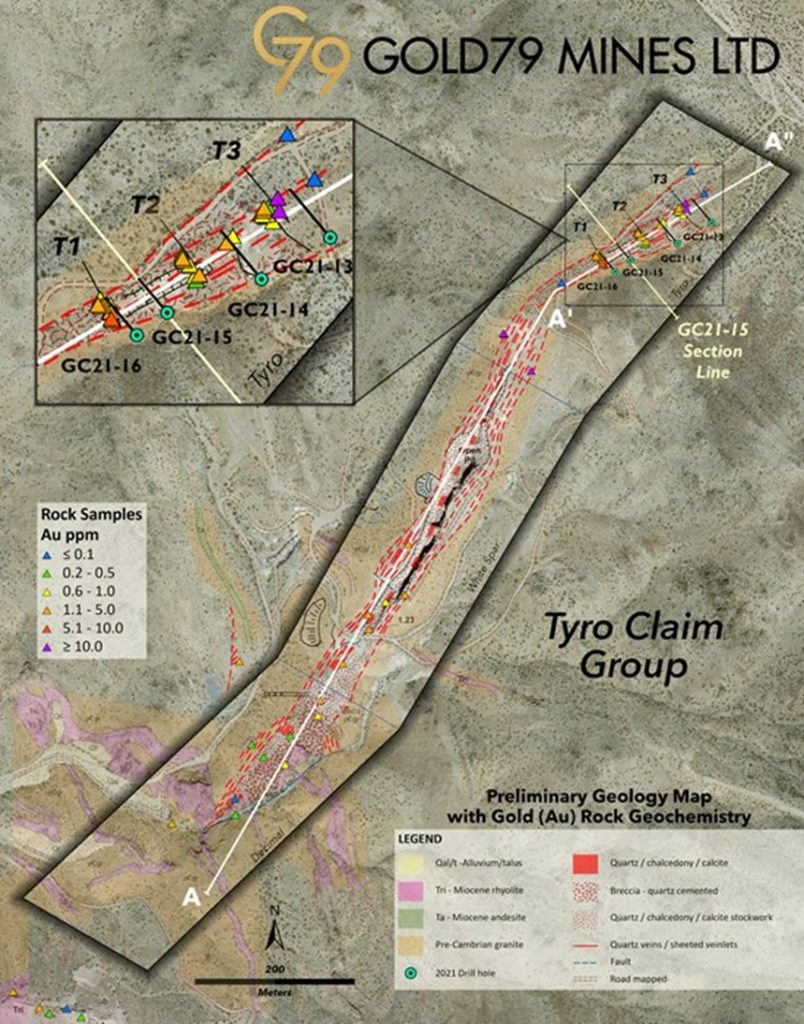 Vein from the Tyro target strongly resembles vein from the gold-rich, epithermal Oatman district, about 15 to 20 km to the south. At Oatman, several veins have been exploited to depths greater than 200 to 400 meters at 10 to 20 g/t Au with average widths ranging from 3 to 10 meters. The Tyro target, which ranges from 20 to 50 meters, is likely an upper-level manifestation of an Oatman-type vein with broad, sheeted vein complexes coalescing into a discrete, high-grade vein at depth. It is reported that the historical shaft on the Tyro target, about 350 meters to the southwest of these drill holes, was developed to a depth of about 150 meters and was likely developed on vein. 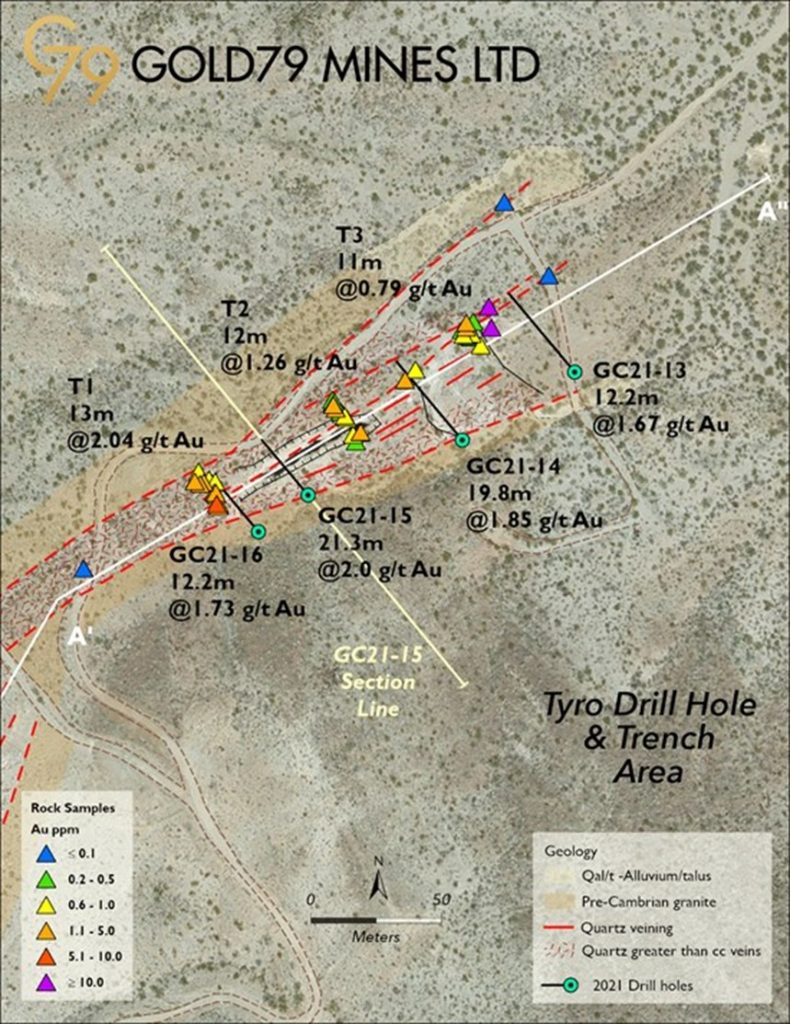 Gold79 Mines Ltd. is a TSX Venture listed company focused on building ounces in the Southwest USA. Gold79 holds 100% earn-in option to purchase agreements on three gold projects: the Jefferson Canyon Gold Project and the Tip Top Gold Project both located in Nevada, USA, and, the Gold Chain Project located in Arizona, USA. In addition, Gold79 holds two projects with minority interest being a 36.6% interest in the Greyhound Project, Nunavut, Canada under JV by Agnico Eagle Mines Limited and a 20% carried interest in the Taviche Project in Oaxaca, Mexico now under option to Fortuna Silver Mines Inc.