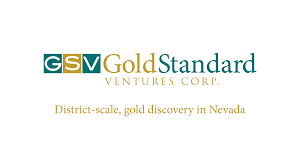 Gold Standard Ventures Corp. (TSX:GSV) (NYSE AMERICAN:GSV) today reported on the status of the 2018 infill drilling program at the Pinion oxide gold deposit on its 100%-owned/controlled Railroad-Pinion Project in Nevada’s Carlin Trend.  Two reverse-circulation and two core rigs have completed 8,126m of infill drilling in 87 holes (refer to Pinion plan map at the following link – https://goldstandardv.com/lp/Pinion-apr2018-drill-maps/).  Results from 22 Pinion holes are summarized below.

This year’s US$25.8 million program includes an estimated 74,800m of RC and core drilling in 381 holes (see February 26, 2018 news release).  Infill and development work at Dark Star and Pinion is expected to account for approximately 40,800m of drilling in 296 holes while exploration should add another 34,000m of drilling in 85 holes.  Drilling to date and upcoming plans include the following:

Jonathan Awde, CEO and Director of Gold Standard commented: “Infill drilling is once again confirming the conservative nature of our Pinion and Dark Star resource estimates. A number of holes have either reported higher than expected grades, deeper intercepts that were not in the original model, converted waste to resources or found lateral extensions beyond the known resource limits. Attention now shifts to our exploration program at Jasperoid Wash where we believe we have a strong possibility of reporting a significant addition to our resource package.”

Pinion drill results are as follows:

Gold intervals reported in this table were calculated using a 0.14 g Au/t cutoff.  Weighted averaging has been used to calculate all reported intervals.  True widths are estimated at 70-90% of drilled thicknesses.

Don Harris, Gold Standard’s Senior Development Geologist stated: “The Pinion development program is designed to infill drill spacing to 30m in the potential minable portions of the gold mineralization and expand the footprint to the west where mineralization comes to surface.  Results to date have generally met or exceeded the model expectations, with some areas of higher-grade (PR18-03) and some areas of higher AuCN ratios (80-90%) than currently modeled.  These upgrades can have a positive impact to the PEA currently in progress on the project.”

All sampling was conducted under the supervision of the Company’s project geologists and the chain of custody from the project to the sample preparation facility was continuously monitored.  A blank or certified reference material was inserted approximately every tenth sample.  The samples were delivered to Bureau Veritas Mineral Laboratories preparation facility in Elko, NV where they were crushed and pulverized.  Resulting sample pulps were shipped to Bureau Veritas certified laboratory in Sparks, NV or Vancouver, BC.  Pulps were digested and analyzed for gold using fire assay fusion and an atomic absorption spectroscopy (AAS) finish on a 30-gram split.  Over limit gold assays were determined using a fire assay fusion with a gravimetric finish on a 30-gram split. All other elements were determined by ICP analysis.  Data verification of the analytical results included a statistical analysis of the standards and blanks that must pass certain parameters for acceptance to insure accurate and verifiable results. Final drill collar locations are surveyed by differential GPS by Apex Surveying, LLC of Spring Creek, Nevada.