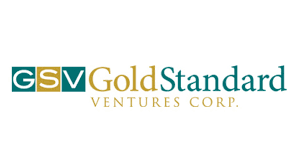 Jonathan Awde, CEO and Director of Gold Standard commented: “This drilling is designed to convert current inferred resources to measured and indicated resources in support of a future prefeasibility study. Nonetheless, we also look at these holes as a second wave of exploration drilling as we discover structural features that appear to drive exceptional grades and thicknesses in certain locations. Some of these results are well in excess of what was predicted in the current resource model and the data could help us find other such occurrences. We are especially encouraged by the additions we are making to the depth dimension of the Dark Star deposit which we had not expected.”

** Gold intervals reported in this table were calculated using a 0.20 g Au/t cutoff.  Weighted averaging has been used to calculate all reported intervals.  True widths are estimated at 70-90% of drilled thicknesses.

Mac Jackson, Gold Standard’s Vice President of Exploration stated: “These are significant, shallow oxide intercepts.  Infill drill results continue to beat our resource model, and Dark Star is exceeding expectations.  We have intersected a strong structural focus of the Dark Star gold system, and it shows us the potential of the systems we are exploring in the Dark Star and Jasperoid Wash corridors.”

All sampling was conducted under the supervision of the Company’s project geologists and the chain of custody from the project to the sample preparation facility was continuously monitored.  A blank or certified reference material was inserted approximately every tenth sample.  The RC samples were delivered to either ALS Minerals or Bureau Veritas Mineral Laboratories preparation facility in Elko, NV where they were crushed and pulverized.  Resulting sample pulps were shipped to either ALS Minerals or Bureau Veritas certified laboratory in Sparks, NV or Vancouver, BC.  Pulps were digested and analyzed for gold using fire assay fusion and an atomic absorption spectroscopy finish on a 30 gram split.  All other elements were determined by ICP analysis.  Data verification of the analytical results included a statistical analysis of the standards and blanks that must pass certain parameters for acceptance to insure accurate and verifiable results.

Drill hole deviation was measured by gyroscopic down hole surveys that were completed on all holes by International Directional Services or Minex of Elko, NV.  Final collar locations are surveyed by differential GPS by Apex Surveying, LLC of Spring Creek, Nevada.