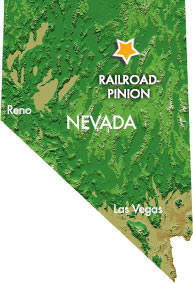 The Financing is expected to close on or about February 8, 2016, following which Goldcorp will own (inclusive of shares currently held by Goldcorp) approximately 9.9% of the Company’s issued and outstanding shares on an undiluted basis, prior to giving effect to any shares purchased by OceanaGold Corporation pursuant to its existing equity participation right to acquire up to 19.9% of the issued and outstanding shares of the Company. The net proceeds of the Financing will be used to further advance the Company’s Railroad-Pinion project and for general corporate and working capital purposes.

Jonathan Awde, President, CEO and Director of Gold Standard commented, “We view this investment by Goldcorp as a validation of the exploration success we have had at the Railroad-Pinion project. With the proceeds from the private placement we will look to aggressively expand the 6km Dark Star corridor, the location of the recent North Dark Star discovery, which we believe has the potential to host a significant gold system.”

Provided that Goldcorp holds not less than 7.5% of the Company, Goldcorp will also have the following rights:

Macquarie Capital Markets Canada Ltd. is acting as financial advisor to the Company.

Gold Standard will pay a cash commission in connection with the Financing. The Company has applied to list the Common Shares on the TSX Venture Exchange and the NYSE MKT LLC. Listing will be subject to the Company fulfilling all of the listing requirements of the TSXV and the NYSE MKT. The Financing is not being offered in the United States.