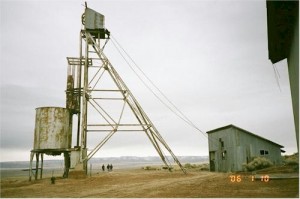 Gold Canyon Resources Inc. (TSX VENTURE:GCU)(PINKSHEETS:GDCRF) is pleased to announce the filing of the Preliminary Economic Assessment for its 100% controlled Springpole Gold Project in northwest Ontario, Canada, the results of which were previously announced on March 25, 2013.

The Preliminary Economic Assessment, titled “Preliminary Economic Assessment for the Springpole Project, Ontario, Canada” is effective as at March 25, 2013 and dated May 3, 2013, and was completed by SRK Consulting (Canada) Inc. of Vancouver, British Columbia, pursuant to National Instrument 43-101 Standards of Disclosure for Mineral Projects of the Canadian Securities Administrators (“NI 43-101”). The PEA was completed by, or under the supervision of Bruce Murphy, Maritz Rykaart, Mark Liskowich, Dino Pilotto and Adrian Dance, each of whom is a “Qualified Person” as such term is defined in NI 43-101. The PEA is now available through the Internet under the Company’s profile on SEDAR at www.sedar.com and on the Company’s website at www.goldcanyon.ca.
Quinton Hennigh, Ph.D., P.Geo., a Qualified Person pursuant to NI 43-101 who is acting as a technical adviser to, and a director of, Gold Canyon, is responsible for, and has reviewed and approved, the technical information contained in this news release.
About Gold Canyon Resources Inc.:
Gold Canyon is engaged in the acquisition and exploration of mineral and precious metals properties. The Company controls a 100% interest in the Springpole Gold – Horseshoe Island Gold, Platinum, Palladium Project and a minority interest in the Favourable Lake Poly-metallic property currently under option to Guyana Frontier Mining Corp. pursuant to an option and joint venture agreement entered into in December 2005 – all in the Red Lake Mining District of Ontario, Canada.

Springpole is an alkaline intrusion hosting a gold system that represents a potentially new style of Canadian Archean Shield gold deposit. The Portage Zone is hosted by a trachytic porphyry intrusion displaying polyphase autolithic breccias that host gold mineralization. Other zones, including the East Extension and Main, consist of high-grade veins and pods hosted in diatreme breccias composed of intrusive and country rock fragments. These breccias surround the northwest and northern margins of the Portage Zone. The known mineralized zones underlie a total known area of about 4 square kilometers representing only about 15 percent of the greater alkaline intrusive complex which remains yet to be explored.