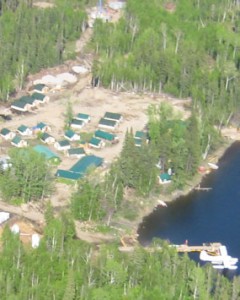 Gold Canyon Resources Inc. (TSX VENTURE:GCU) (PINKSHEETS:GDCRF) is pleased to announce that it has now closed the private placement of 8,497,564 common share units described in its August 2, 2013 news release. Units were priced at $0.23 per Unit, for gross proceeds to the Company of $1,954,440. Each Unit is comprised of one common share in the capital of the Company and one non-transferable share purchase warrant of the Company exercisable at any time up to 4:30 p.m. (Vancouver time) on August 8, 2015 for one common share at a price of $0.40 per share. The proceeds of the private placement will be used for additional work on Gold Canyon’s Springpole Gold Project and general corporate purposes.

All securities to be issued will be subject to a hold period which will expire on December 9, 2013 in accordance with the rules and policies of the TSX Venture Exchange and applicable Canadian securities laws and such other further restrictions as may apply under foreign securities laws.

Gold Canyon is engaged in the acquisition and exploration of mineral and precious metals properties. The Company controls a 100% interest in the Springpole Gold – Horseshoe Island Gold, Platinum, Palladium Project and a minority interest in the Favourable Lake Poly-metallic property currently under option to Guyana Frontier Mining Corp. pursuant to an option and joint venture agreement entered into in December 2005 – all in the Red Lake Mining District of Ontario, Canada.