GoGold Releases First Results from Salomon-Favor at Los Ricos North, including 11m of 529 g/t AgEq and 5m of 737 g/t AgEq

GoGold Releases First Results from Salomon-Favor at Los Ricos North, including 11m of 529 g/t AgEq and 5m of 737 g/t AgEq

GoGold Resources Inc. (TSX: GGD) (OTCQX: GLGDF)  is pleased to release the first assay results from the Company’s Salomon-Favor target on the Los Ricos North project, which is located approximately 5km southeast of the La Trini deposit.  The drill program is testing the known zones of mineralization along strike and down dip from the historical underground workings.

“We’re extremely encouraged with our initial drilling results at Salomon-Favor to see four stacked zones of wide mineralization starting from surface,” said Brad Langille, President and CEO. “With the completion of our C$34.5 million financing last week, we have the funds to explore aggressively and drill multiple targets at Los Ricos North simultaneously, including La Trini and Salomon-Favor, and move the project to an initial resource estimate by the second calendar quarter of 2021.”

Hole LRGF-20-004 at El Favor intersected 4.1m of 528 g/t AgEq from 34.0m to 38.1m, which was included in a 41.1m intersect of 93 g/t AgEq, after excluding 6.4m of historically mined voids.  In addition, this hole intersected 15.8m of 93 g/t AgEq beginning at surface.  The mineralization dips steeply to the north where it has been intersected in mine workings along the valley floor some 300 meters down dip.  Hole LRGF-20-003 was lost at a shallow depth due to a technical issue where it didn’t cut the complete mineralized package.  Hole LRGF-20-004 was collared at the same location at a steeper angle and was able to pass through the entire zone.

The 2020 field work began in June after compiling the work conducted by former operators.  GoGold initiated a program of geological mapping and sampling along the historical El Favor, Salomon and El Orito structures.  These structures are characterized by quartz veins and stockworks over a 2.5 km strike length and several hundred channel samples were collected from outcrops along the zones.   Currently the Company has 6 drill rigs operating at Los Ricos North, with 3 operating at the La Trini target, and 3 drilling at the Salomon-Favor target.  Detailed intersections are listed in Table 1 and the hole locations are shown in Table 2. 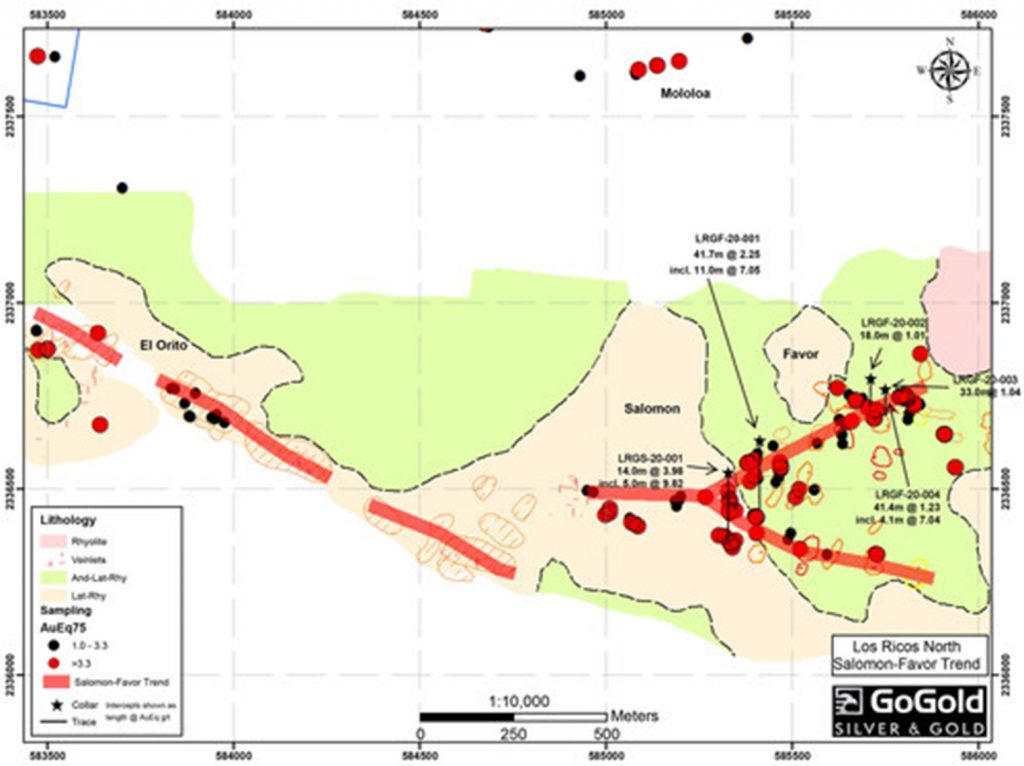 The Los Ricos North Project was launched in March 2020 and includes drilling at the Salomon-Favor, La Trini, and Mololoa targets.