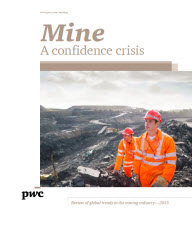 Despite production volume increasing six percent, 2012 marked only the second year over the past decade that global mining revenue did not increase, according to Mine 2013: A Confidence Crisis, the 10th edition in PwC’s installment on the global mining industry. This publication highlights industry trends based on data from the top 40 mining companies.

According to the report, the growing disconnect between the performance of the mining industry’s share prices, commodity prices, and the broader equity markets continued in 2012. Net profits dropped to $68 billion, a 49 percent decrease from 2011. In addition, market capitalization fell for 37 of the top 40 companies, totaling a loss of over $200 billion. Mining stocks fell slightly in the last year, but stocks have been hit in the first four months of 2013 with nearly a 20 percent decline. Meanwhile, shareholders are calling for change from the top, resulting in half of the CEOs at the 10 largest global mining companies being replaced since April 2012.

“In the rush to build new production capacity, productivity suffered and the full potential of these investments haven’t been recognized, contributing to a lack of investor confidence,” said Steve Ralbovsky, U.S. mining leader at PwC. “Well-positioned mining companies have responded by returning cash to shareholders while setting the stage for stronger future upside by reducing operating costs and increasing productivity of their existing core assets.”

As miners attempt to rebuild the market’s confidence, capital expenditures are being tightened. Forecasted capital expenditures for 2013 have already been reduced by 21 percent compared to 2012, dropping to $110 billion. At the same time, project hurdle rates have increased with some of the top 40 companies stating that only projects with a return above 25 percent will be pursued. Even with cost containment initiatives well-underway, a strategic, thoughtful approach to rebalancing capital spends should not have a negative impact on miners’ ability to meet the continued demand for their products, according to PwC.

Long-term global fundamental demand remains intact, but the ongoing uncertainty in advanced economies has shifted the industry’s center of gravity.  Emerging and developing markets have become the world’s growth engine and mining companies have taken a keen interest in staking their claim to these regions. Half of the industry’s 40 largest miners by market capitalization have the bulk of their operations in emerging countries to capitalize on demand. At the same time, China remains the dominant force in driving demand, consuming 40 percent of global metal production.

“When combining Chinese consumption with the continued emergence of large developing economies, such as Brazil, India and Indonesia, future demand for commodities continues to look healthy,” added Ralbovsky.

PwC US helps organizations and individuals create the value they’re looking for.  We’re a member of the PwC network of firms in 158 countries with more than 180,000 people.  We’re committed to delivering quality in assurance, tax and advisory services.