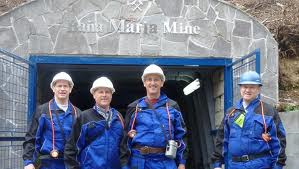 Global Minerals Ltd. (TSX-V:CTG) is pleased to announce that it has closed its previously announced non-brokered financing and has issued a total of 13,024,000 post-consolidation units for aggregate proceeds of $3,256,000, at a price of $0.25 per Unit. Each Unit is comprised of one post-consolidation common share and one share purchase warrant, exercisable to purchase one post-consolidation common share for two years at a price of $0.35. The expiry date of the warrants are subject to acceleration such that, should the daily trading price of the shares of the Company on the TSX Venture Exchange exceed $0.50 (on a post-consolidated basis) for twenty consecutive trading days commencing four months after the issuance of the warrant the Company may, at its discretion, accelerate the expiry date such that the warrants will expire on the 30th day following the last day of the Acceleration Period by issuing a news release announcing the accelerated expiry within two trading days of the last day of the Acceleration Period.

The proceeds from the Financing will be used to further the development of the Strieborna project and for general working capital.

Strieborna is a high-grade silver-copper vein type deposit in an historic mining district near the town of Roznava in eastern Slovakia. It has excellent expansion potential over and above the already well-defined resource. Significant infrastructure at site include a working shaft and hoisting system, extensive underground access through a series of drifts, crosscuts and tunnels and associated surface facilities. Global is using all efforts to advance the property into commercial production.