Gianni Kovacevic – “FT Opinion: Why Is Nobody Buying The Copper Needed For A Greener World?”

Gianni Kovacevic – “FT Opinion: Why Is Nobody Buying The Copper Needed For A Greener World?” 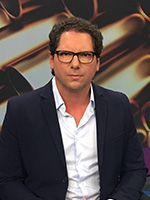 We found the today’s FT Opinion article by John Dizard very sobering, and more importantly, extremely matter of fact. It is pasted below for your convenience.

Below the article, I supply the two sensitivity graphics from the economic studies of CopperBank’s 100% owned Copper Creek and Contact Copper Projects. The take-away is, based on their 2013 independent reports, the net present value (NPV) of these projects climbs by USD $140 million for each 0.10 /lb move in the copper price above $3.00/lb.

Paul Gait and I have been on numerous conference panels in the past, and we generally agree with each other. My hat goes off to him for coining what should become a well used catch-phrase for copper investors – “The Greta Scenario” for future copper prices, $20,000 /tonne, ~$9.00/lb! Obviously this is a tongue in cheek number, but there is truth to answering the question, where will all the copper for the Capital “G” Greens, and Greta, come from?

The below article is a must read for any copper investor as John Dizard is anything but a Jr. Mining Investor, yet, that is what he is highlighting in the body of the writing. For CopperBank investors, it should be emphasized, our projects are in the now 21% tax-rate USA (that is another 14% of NPV value-add to our 2013 studies that used 35% rates), and it would take in excess of $100 million to duplicate/complete the work at Copper Creek and $40 million for Contact. 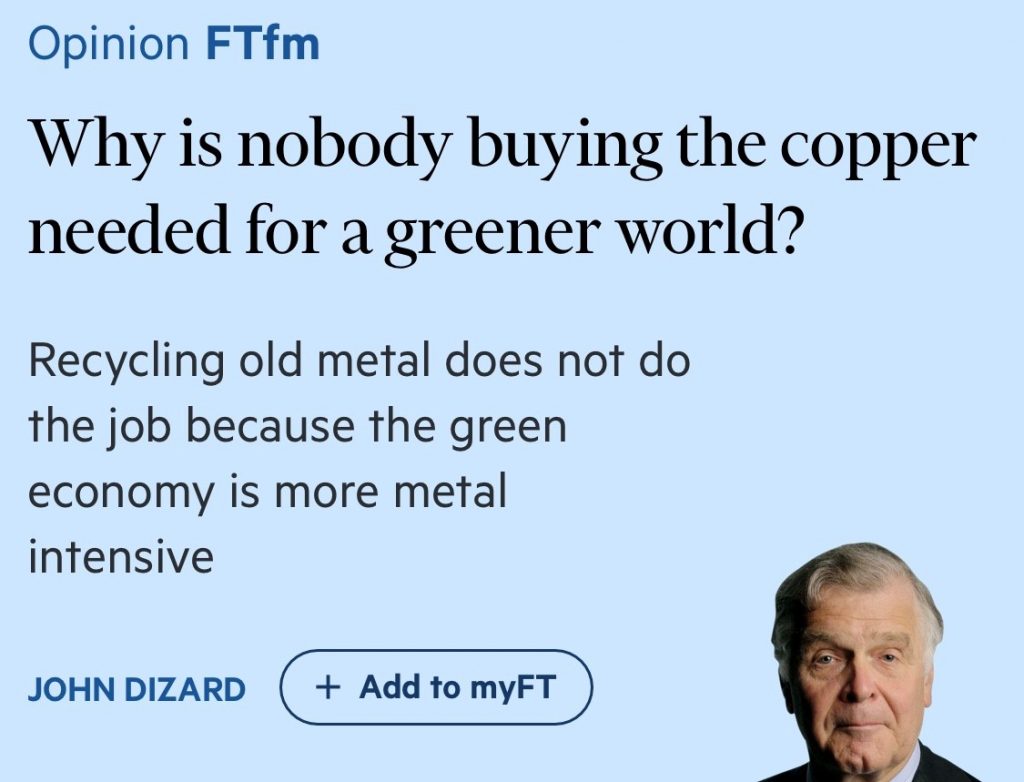 There is no longer much dissent over the need for a global decarbonisation policy. Even the Russian government is indicating it will sign the Paris climate accords. International oil companies talk about their products as “transition” fuels and scatter pictures of biofuel production and solar panels throughout their annual reports.

Greta Thunberg is no longer a girl but an icon. People would burn votive candles in front of her picture, but that would add to the emissions burden.

So why does nobody want to buy the copper required for a greening world? Over the past month every global forum with a serious carbon footprint has agreed we have to stop emitting that stuff.

Renewable energy resources have been nodded at by all these assemblies of respectable and important people. Wind and solar, though, requires three to 15 times as much copper per unit of output as fossil fuel generation. This is after decades of technological development and efficiency improvements.

Copper content, though, is hard to engineer away. The easy substitutions of aluminium have already been done. Copper is just too heat- and electricity-conductive to be wished away.

Yet the price of copper tried, feebly, to get out of its sickbed at the end of the summer, only to fall back again after the middle of September. At the beginning of October, the LME copper price has barely kept above $5,600 a tonne. That is above the cash operating costs for existing mines, but nowhere near enough to draw investment to new mines, assuming someone has found the stuff, measured the deposit, laid out transportation and water supplies, and arranged all the permits.

Mining equities prices are drifting to the sea floor, their remains only retaining some buoyancy through their inclusion in ETFs and broad indices. Oil and gas exploration and production companies may have their ups and downs, but at least there’s a market for shares in those with operating cash flow and positions in the right producing basins.

“Instead, we are working on three continents with governments and industry associations to see what can be done about [the lack of new mine investment]. No one wants mining, but they want the product.”

Junior mining companies were long easy to caricature as tools of sleazy Vancouver or Sydney promoters, holes in the ground with liars on top etc etc. But they have been essential to the ecology of how people get metal to make electric bikes, cappuccino machines, server farms and sailboats to go to UN meetings. Major mining companies do not find new prospects. Juniors do. Then the majors buy them and develop them.

That machine is broken. And no, recycling old metal does not do the job because the green economy is more metal intensive than the black economy. Also, we cannot stop the development of the poorer parts of the world to meet the richer world’s decarbonisation schedules.

Paul Gait and his team of metals mining analysts at Bernstein in London have come up with estimates of the copper price levels needed to finance new mines. “We believe copper needs to be priced at $8,800/tonne, or a 40 per cent uplift, to meet the government-agreed 2030 targets for decarbonisation.”

If you believe the current consensus targets are not adequate, Mr Gait and his team have a more ambitious “Greta Scenario” for complete decarbonisation by 2025. That would require no less than $20,000/tonne to produce the required copper.

Even keeping copper production close to today’s level will be a challenge. As Mr Gait says: “The industry faces an enormous decline rate [from existing, depleting reserves]. Mine supply has grown at 2.5 per cent and 3 per cent per annum forever. To accelerate beyond that for an industry the size of copper mining would be a hell of an undertaking.”

OK, what if we fail at decarbonisation, and we are forced to turn to adaptations? Such as Europeans buying home air conditioners (a big new growth market). Those will require a lot of copper for coils, wires, power generation, etc.

None of this is reflected in the (flat) forward curve for copper prices. On this course, decarbonisation will require not science and industry, but wizards or divine intervention. 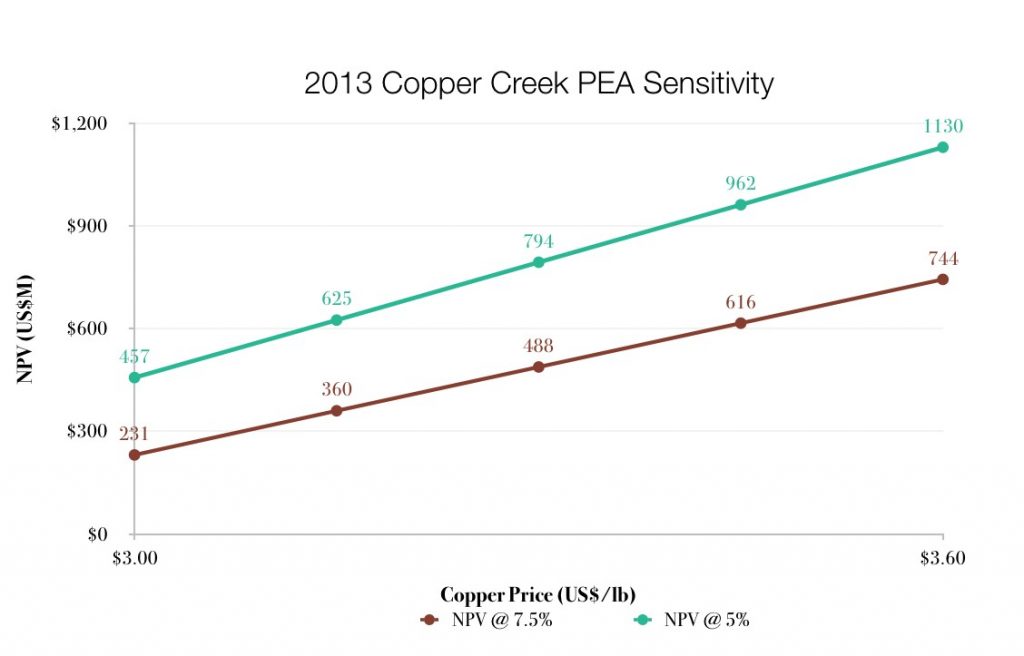 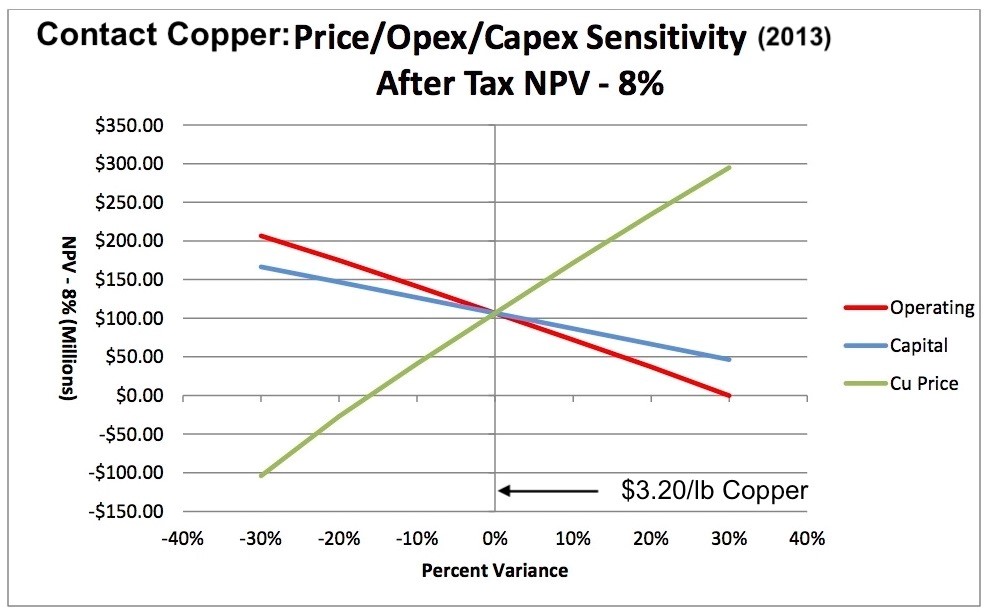