GFG ANNOUNCES DRILL RESULTS FROM THE RATTLESNAKE HILLS GOLD PROJECT IN WYOMING, US

GFG ANNOUNCES DRILL RESULTS FROM THE RATTLESNAKE HILLS GOLD PROJECT IN WYOMING, US

Working with a high-caliber Newcrest team over the past 16-months has strengthened our exploration model and understanding of the district. Over the next few months, we will work on developing a plan to advance and prioritize the many drill-ready brownfield and greenfield targets across the property that remain to be tested.

While we plan our next steps at RSH, we anticipate being in a position to announce the remaining assay results from our Pen Gold Project and will begin our 4,000 metre drill program in the coming weeks.”

The 2019 drill program consisted of 3,900 metres of core drilling from three holes testing the South Deep and North Deep targets as well as strike extensions to North Stock and Antelope Basin deposits (See Figures 1 and 2). The deep targets were developed to test for potential feeder zones to the gold mineralization at the North Stock diatreme-hosted deposit while passing through prospective extensions of shallower mineralization.

The upper portion of the hole hosted 0.55 grams of gold per tonne (“g/t Au”) over 57.7 metres in altered schist cut by quartz monzodiorite dykes including a sub-interval of 0.99 g/t Au over 19.8 metres (See Table 1). The dyke is strongly fractured, clay-altered and hosts carbonate stockwork veining and the schist is weakly sericitized and cut by quartz veins and carbonate stockwork veining. This intercept extends mineralization previously intercepted at the Cowboy Target significantly southward and sub-parallel to the Antelope Basin deposit (See Figures 1 and 2; “GFG Resources Drills 0.82 g/t Gold over 99.1 Metres & Provides Summary of 2017 Drill Program at Rattlesnake Hills Gold Project”). The hole intersected a second quartz monzodiorite from 832 metres to 977 metres depth that is interpreted as the northern strike and down-dip extension of the Antelope Basin system. This dyke is fractured, clay- and sericite-altered, variably sulphidized and hosts carbonate veinlets. Anomalous gold grades of up to 0.24 g/t Au were returned from narrow sections of this interval.

Further downhole, the hole tested the South Deep target, a down-dip extension of the mineralized zone seen in historic drill hole RSC-027 that hosted 2.47 g/t Au over 22.9 metres associated with multiple strong, sub-vertical, resistivity gradients and numerous mineralized feldspar porphyry dykes. The hole intersected the South Deep Target from 1,122 metres to 1,338 metres, returning zones of weakly to moderately altered schist and heterolithic breccia cut by carbonate- and potassic-altered feldspar porphyry dykes that host pyrite and attain thicknesses of up to 13 metres. Peak gold grades of up to 0.44 g/t Au were intersected within a porphyry dyked and brecciated interval that graded 0.14 g/t Au over 25.9 metres.

Near the base of the drill hole, the North Deep Target was tested as the hole passed through the Precambrian/Tertiary contact around 1,692 metres. It intersected broad zones of intensely fractured, fluorite-bearing, pyritic, potassic- and carbonate-altered heterolithic breccia. The bottom 26 metres of the hole hosted a feldspar porphyry with strong potassic alteration, cut by abundant pyrite and magnetite veining. Despite the encouraging geological setting, no significant gold grades were returned from this interval.

RSC-195 was drilled to test the North Deep Target down-dip of gold mineralization associated with the North Stock deposit.

The hole passed through broad zones of heterolithic breccia and phonolite before passing into monolithic schist breccia cut by phonolite and feldspar porphyry dykes and finally terminating in schist at 1,081 metres depth (See Figure 2). Logging indicates an increasing intensity of potassic and clay alteration as well as increasing amounts of sulfide and iron oxide with depth in the phonolite and feldspar porphyry units. Multiple low-grade gold intervals were returned over narrow intervals including 0.16 g/t over 6.1 metres, 0.22 g/t over 6.1 metres and 0.15 g/t over 7.2 metres from 122.5, 505.4 and 906.0 metres, respectively.

RSC-196 was drilled to test the western extent of the North Deep Target; approximately 200 metres west of RSC-195.

The hole passed through a broad interval of altered, heterolithic breccia before passing into intercalated heterolithic breccia and phonolite from 484 through 825 metres; bottoming in potassic- and carbonate-altered phonolite through to the base of the hole at 1,010 metres (See Figure 2). As with RSC-195, the intensity of potassic alteration is strongest near the phonolite and increases with depth, along with iron oxide veining and fracture intensity. A significant zone of gold mineralization was intercepted from 19.2 through 132.0 metres depth returning 0.25 g/t Au over 112.8 metres. This interval of heterolithic breccia is fractured, strongly stained with iron oxides and hosts moderate potassic and clay alteration. Further downhole, several narrow intervals returned 0.10 to 0.44 g/t Au including 0.33 g/t Au over 7.6 metres from 758.7 metres hosted in heterolithic breccia and phonolite.

Based on geological review, 3D modelling and CSAMT data, holes RSC-195 and RSC-196 are interpreted to have either remained in the diatreme throughout their length or to have passed from the North Stock diatreme through its north contact into the Precambrian schists, and only partially testing the North Deep target. The majority of gold mineralization associated with the North Stock deposit is related to the southern contact of the diatreme and this contact remains to be tested at depth.

GFG will continue to work with its project partner Newcrest over the coming months to evaluate and prioritize the next steps to advance the Project. As per the Option and Earn-in Agreement (see news release: “GFG Signs Option and Earn-In Agreement with Newcrest to Advance the Rattlesnake Hills Gold Project”), Newcrest has met its obligations of the Option Phase and in March of 2020, can elect to exercise its option to earn-in. If Newcrest elects to advance to Stage 1, it will make a cash payment to GFG of US$500,000 and will have the right to earn 49% of the Project over a four-year period by spending an additional US$14.0 million, less any excess amount spent in the Option Phase, with a minimum annual exploration expenditure of US$1.0 million.

At the Company’s Pen Gold Project, the Company expects to receive the remaining assay results from the 2019 Phase 2 drill program in the coming weeks and begin its winter drill program of approximately 4,000 metres. The drill program will be focused on follow-up drilling at the Slate Rock, HGM, Crawford and Nib prospects and other regional targets.

*Gold intervals reported in the above table are reported at a minimum 3 metre width and a 0.1, 0.2 or 0.5 g/t Au cut-off. Weighted averaging has been used to calculate all reported intervals. True widths are estimated at 50-100% of drilled thicknesses. 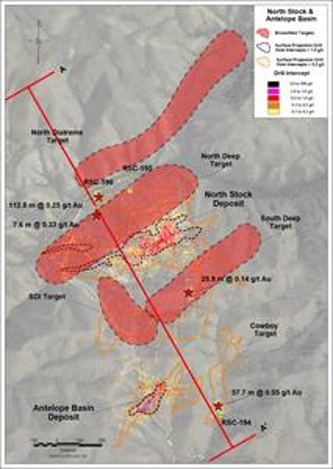 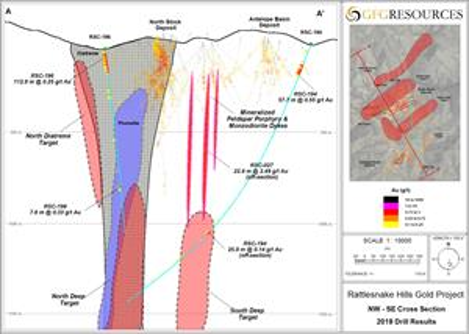 GFG Resources is a North American precious metals exploration company focused on district scale gold projects in tier one mining jurisdictions, Ontario and Wyoming. In Ontario, the Company owns 100% of the Pen and Dore gold projects, two large and highly prospective gold properties west of the prolific gold district of Timmins, Ontario, Canada. The Pen and the Dore gold projects have the same geological setting that hosts most of the gold deposits found in the Timmins Gold Camp which have produced over 70 million ounces of gold. In Wyoming, the Company has partnered with Newcrest Mining Ltd. through an option and earn-in agreement to advance the Rattlesnake Hills Gold Project. The geologic setting, alteration and mineralization seen in the Rattlesnake Hills are similar to other gold deposits of the Rocky Mountain alkaline province which, collectively, have produced over 50 million ounces of gold.