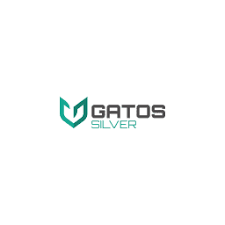 Gatos Silver, Inc. (NYSE:GATO) (/TSX: GATO) provided a quarterly update on the drilling and exploration programs in the Los Gatos district, including the extension of the South-East Deeps zone at its 70%-owned Cerro Los Gatos mine. The Company also announced a corporate update regarding the timeline for filing outstanding financial statements.

“We continue to be very encouraged by the results of our ongoing resource drilling and exploration programs within the Cerro Los Gatos mine and in the Los Gatos district as we work towards realizing our district-scale upside. At CLG, the discovery of the South-East Deeps zone in 2022 was significant, and further drilling continues to demonstrate the scale and potential of this mineralized zone. We believe that this zone has the potential to provide years of mine life extension.

Additionally, we have made solid progress on resource conversion drilling of high-grade inferred material located adjacent to existing mine infrastructure. The results of our ongoing resource expansion and resource conversion drilling will be reflected in an updated mineral reserve and mineral resource that is expected to be announced in the third quarter of 2023. Beyond the CLG deposit, we see significant potential for new discoveries on our extensive land position and we are actively working on the identification, prioritization and follow-up on the highest quality opportunities.”

As previously announced in our News Release dated October 3, 2022, drilling in the area beneath the main South-East zone discovered both silver-copper and silver-lead-zinc mineralization extending significantly below the bottom of the 2022 mineral reserve, an area that is referred to as the South-East Deeps.

Prior to the discovery of the South-East Deeps, mineralization at CLG had been recognized between the elevations of ~1,050 masl and ~1,500 masl. Following the latest drilling, mineralization has now been intercepted down to an elevation of ~735 masl, with a total vertical extent of mineralization in the South-East zone now more than 650 meters and extending approximately 415 meters below the bottom of the 2022 mineral reserve.

Since the October 3, 2022 announcement, drilling in the South-East Deeps zone has continued and additional assays have been received from drilling that was largely focused on step-out holes towards the NW and SE as well as at depth to continue defining the extents of the mineralized area.

Based on this latest drilling, the newly identified mineralized zone now extends more than 950 meters laterally and 400 meters vertically and continues to remain open both laterally and at depth. Drilling intercepts to date have identified a higher-grade core which is where drilling will focus over the coming months before testing the extents of the zone laterally.

The South-East Deeps discovery and recent drill results continue to demonstrate excellent potential for a multi-year mine life extension, taking advantage of existing surface and underground mine infrastructure for future mine development at depth in this zone. 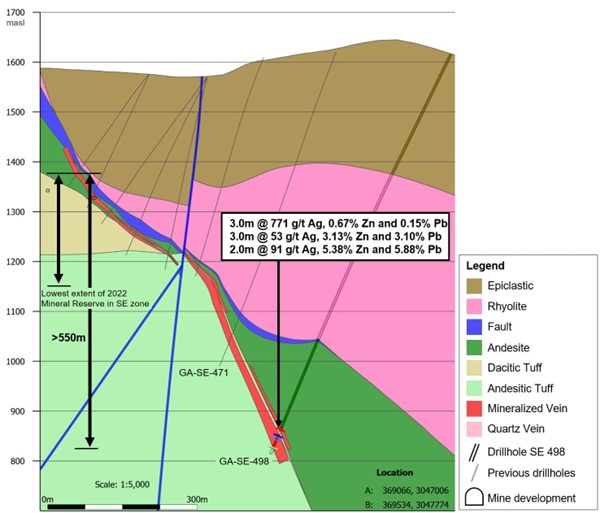 Surface drilling at CLG continued in the fourth quarter of 2022 to improve confidence in areas of higher-grade inferred resources in the North-West, Central and South-East zones of the deposit. In addition to the surface drilling results described below, underground drilling in these zones continues targeting both resource conversion and resource expansion which will also be used in the mineral reserve and mineral resource update planned for the third quarter of 2023.

Drilling results from all three zones confirmed the presence of additional above reserve cut-off grade material. The intercepts in the Central and South-East zones have returned particularly high base metal results. Completed and future drilling in these areas, which are adjacent to the 2022 mineral reserve, is targeting to increase the resource confidence to include this material in the mine plan update for the third quarter of 2023 and is anticipated to require only minimal additional mine development.

In addition to the encouraging resource extension opportunities at CLG, the LGD, also held by the Los Gatos Joint Venture comprises a large land package covering over 103,000 ha. The Company considers the district to be very prospective for hosting additional Ag-Zn-Pb-Au-Cu deposits. The LGJV has an established pipeline of prospects with over 45 targets identified to date. Work is advancing on detailed mapping and drill testing of the highest priority known targets, as well as on district mapping and geophysics to identify additional targets.

The district exploration strategy is focused on the exposed section of andesite running from the far north-west boundary of the property down to Esther and CLG deposits located in the centre of the property, as well as the large basin located south and east of CLG which is underlain by andesite and expected to contain other district scale fault structures that are conducive to large deposits. Priority areas of interest on the exposed andesite include the targets identified in the area from CLG to Esther, the Amapola / Wall-e / Rodeo area, and at El Lince.

During the fourth quarter of 2022, detailed mapping and surface sampling within the CLG to Esther area has provided new information on a system of structures and veins known as the Mamba fault, located within 1 km of the CLG operations. Surface sampling showed elements consistent with those expected at the top of a mineralized system (As, Sb, Hg and Mn). In November 2022, a shallow drill hole (MAM-01), was completed with the objective of confirming the continuity and dip of the structure to inform follow-up drilling which would target the potential mineralized horizon deeper in the system. As expected, the initial drillhole results did not contain significant values for Ag, Zn and Pb but were encouraging with a wide alteration zone and the elements consistent with the top of a mineralized epithermal structure. A deeper follow-up drillhole is planned for Q1 2023 to test the target.

Figure 4: Plan view of Mamba relative to the CLG infrastructure and Esther. 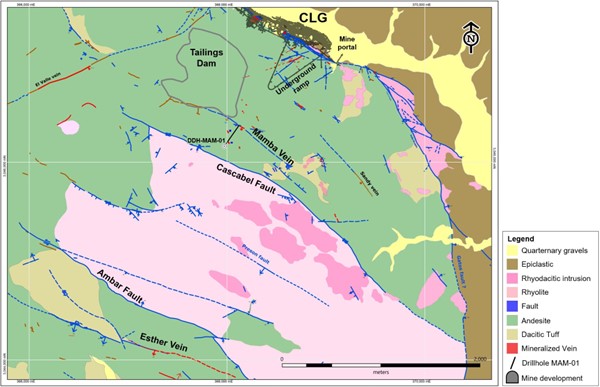 New detailed mapping in the area of Amapola / Wall-e / Rodeo has identified numerous new vein and fault structures. One of the newly identified structures, the Alma vein, has a zone of veinlets between 1-2 meters over a length of 2 km with outcrops showing replacement textures that are indicative of boiling in an epithermal system as well as visible mineralization including sphalerite, galena and pyrite. At Wall-e, hole WA-06 was drilled to 780 meters to target approximately 200 meters underneath the previously disclosed drillhole WA-05. The drillhole intercepted the structure however the host lithology was insufficiently fractured for meaningful mineralized volume. Final assays have not been returned but are not expected to be significant. Further drilling in this area is planned in 2023.

Additionally, the LGJV has acquired extensive magnetic and radiometric data for the property. This data along with the historic IP information available was reinterpreted during the fourth quarter of 2022 and the results are being used to plan future studies that will aim to identify major structures within the basin to the north-east of CLG.

The foregoing is consistent with the Company’s previous disclosure that it expects all delayed filings, including the audit of the financial statements required to be included in its annual report on Form 10-K for the year ended December 31, 2021, and the reviews of its quarterly reports on Forms 10-Q for the quarters ended March 31, 2022, June 30, 2022 and September 30, 2022, to be completed before the end of the first quarter of 2023. The Company expects to hold its annual shareholders’ meeting once such public reports have been filed.

Gatos Silver is a silver dominant exploration, development and production company that discovered a new silver and zinc-rich mineral district in southern Chihuahua State, Mexico. As a 70% owner of the Los Gatos Joint Venture, the Company is primarily focused on operating the Cerro Los Gatos mine and on growth and development of the Los Gatos district. The LGJV consists of approximately 103,087 hectares of mineral rights, representing a highly prospective and under-explored district with numerous silver-zinc-lead epithermal mineralized zones identified as priority targets.