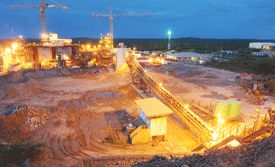 Galane Gold Ltd.(TSX VENTURE:GG)(BOTSWANA:GG) is conducting a comprehensive exploration program over a large number of prospects contained within its mining leases and exploration tenements which cover the bulk of the Tati greenstone belt in Botswana.

The Company is pleased to provide an update concerning on-going exploration work at the Jim’s Luck Prospect to define gold mineralisation found from surface in outcropping, steeply dipping ironstone horizons located approximately 25km from the Mupane plant. The Jim’s Luck prospect forms part of Prospecting Licence 211/2010 which was acquired on the acquisition of NLE in April of 2012.

The Jim’s Luck Prospect hosts some 7 km of strike of prospective ironstone lithologies of which 830m has been drilled in detail. Mineralization exists over most, if not all, of the balance of this overall strike. Furthermore, the Western Parallel and the Southern Extension (both defined later) constitute additional strike potential.