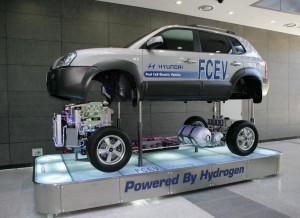 While fuel cell vehicles (FCVs) have the potential to offer significant benefits – including lower emissions and reduced petroleum consumption – compared to today’s automobiles, they also face big challenges.  Makers of FCVs are focused on reducing costs and establishing refueling infrastructure in order to prepare for commercial introductions of models in the 2015-2017 timeframe.  According to a recent report from Navigant Research, worldwide revenue from FCVs will grow from $194 million in 2015 to $73.8 billion in 2030.

“The center of gravity in the development of FCVs has shifted from the United States to Western Europe,” says Lisa Jerram, senior research analyst with Navigant Research.  “Germany, the United Kingdom, and the Nordic countries have less geography to cover than the United States, and are forging ahead on plans to deploy hydrogen fueling stations.”

Fundamentally, the FCV market is dependent on the development of infrastructure, which will determine the timing and volume of automaker FCV rollouts.  This challenge could forestall commercial deployment, according to the report.  Given the length of time it takes to build a station – 18 months to 3 years – it seems likely that that there will be sparse fueling station coverage in the 2015-2017 timeframe, which will lead automakers to take a slow approach to their commercial vehicle rollouts.

The report, “Fuel Cell Vehicles”, outlines in detail the state of policies and programs that will support FCV deployment and the commercialization plans of the major industry players.  The report examines the state of technology in reaching application cost targets for cars, buses and scooters, and profiles innovative startups that could disrupt the market.  The report also details conditions in three major emerging bus markets (Brazil, China, and India) and provides a long-term forecast for fuel cell light-duty vehicles, buses and scooters, segmented by region, through 2030.  An Executive Summary of the report is available for free download on the Navigant Research website.