Fremont Gold Ltd. (TSX-V: FRE) (FSE: FR2) (OTC Pink: USTDF) is pleased to announce that it has identified a highly-prospective drill target at the Alkali claim block, located on the northern extension of the Carlin Trend, Nevada. A recently completed soil sampling program has identified coincident gold and mercury geochemical anomalies associated with a conspicuous magnetic anomaly (see Figures 1 to 3). Together, the data suggests the presence of gold mineralization beneath alluvial cover and represents an exciting drill target within Nevada’s most prolific gold belt.

Clay Newton, Vice President Exploration of Fremont stated, “We are excited by the recent exploration results from Alkali. Soil geochemical anomalies located at the intersection of the NE fault zone with two other fault trends suggest the presence of gold mineralization concealed beneath shallow alluvial cover. As mentioned, Alkali is located on a NE-trending fault zone that projects through the nearby Hollister and Tuscarora mine areas and more distant deposits such as Jarbidge, Marigold and Goldbank, all of which are low-sulfidation epithermal deposits. However, Alkali also lies on the northern extension of the Carlin Trend and is, therefore, prospective for various types of gold deposits, not just low sulfidation epithermal gold deposits such as the nearby Hollister mine, but also Carlin-type sediment-hosted deposits like the neighbouring Rossi and Goldstrike mines, or even copper-gold skarn deposits such as Newmont’s Phoenix mine. The combination of mutually supportive structural, geochemical and geophysical lines of evidence comprise a compelling story for follow-up exploration and drilling.”

Blaine Monaghan, Fremont’s CEO, added, “Like Clay, I am very excited by these exploration results. Freemont has identified an excellent, untested drill target in one of the world’s most prolific gold districts. I look forward to advancing Alkali to the drilling stage.”

Figure 1 shows the ground magnetic high, possibly representing a shallow intrusive body. Figures 2 and 3 show the gold and mercury plots, respectively, of the ionic leach soil survey data over the central portion of Alkali. Mercury and gold are two of the most important pathfinder elements for gold in either Carlin-type or low sulfidation epithermal deposits.

Figure 4 displays the Coyote and Alkali claim blocks with respect to the northern part of the Carlin Trend with the locations of major Carlin-type deposits and nearby epithermal vein deposits along the Alkali NE fault. 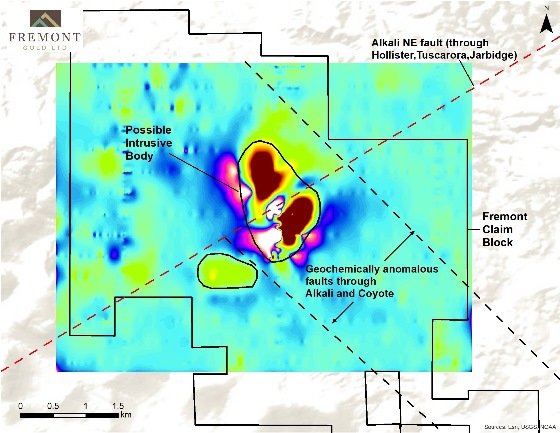 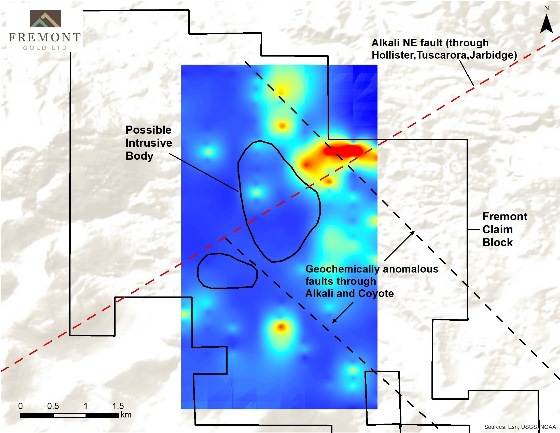 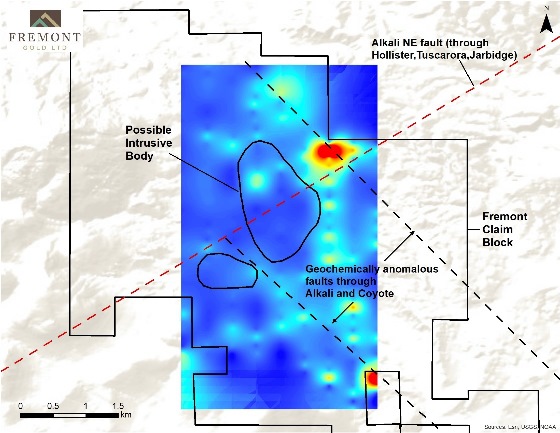 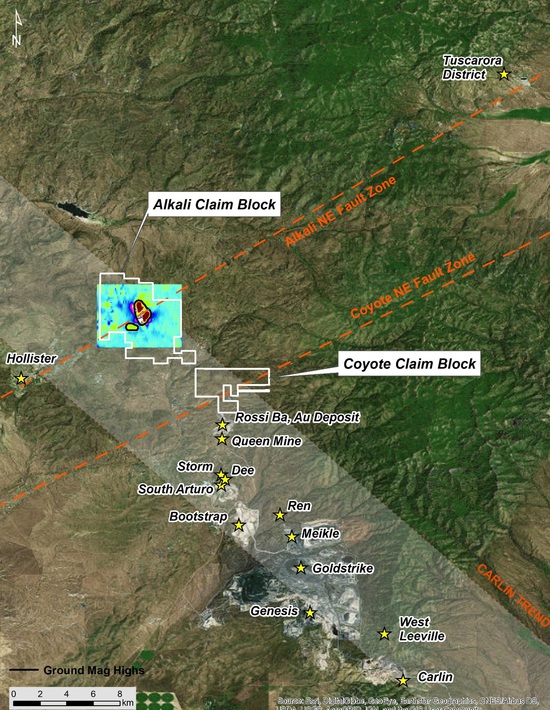 Alkali makes up the northern portion of a 3-block claim package located on the northern end of Nevada’s most famous mineral belt. The two larger claim blocks, Alkali and Coyote, along with the smaller 100 ha Rossi North claim block, are collectively called the North Carlin Project, which comprises over 42.5 km2 and 509 claims. Geochemical and ground magnetometer results for Coyote were announced in a press release dated July 19, 2018. As shown in Figure 4, the locations of the Carlin deposits south of Coyote display a regular spacing of approximately three kilometres apart along a north-south trend, which would make Coyote the next “bead on the string” in terms of periodicity and alignment. This observed periodicity along with gold and pathfinder element soil anomalies, associated with subtle magnetic lows at Coyote, indicates possible gold mineralization at depth. Mapping at Coyote has found broad areas of chalcedonic breccias and siliceous alteration in a northeast trending zone parallel to the nearby Rossi deposit. This type of alteration is frequently associated with concealed gold mineralization in the Carlin Trend.

Soil samples were taken at 120-metre intervals along N-S lines 300 metres apart. The samples were analyzed by the ionic leach method of ALS Global analytical laboratory in Vancouver, BC, Canada. The data presented in this news release were smoothed by using a 3-point moving average along the soil lines and gridded by a kriging method.

Clay Newton is currently employed as Vice President of Exploration of Fremont Gold Ltd. and is not independent of Fremont. He is a graduate of North Carolina State University with a Bachelor of Arts in Geology (1977), received a Master of Science degree in Geological Sciences (1983) from Virginia Polytechnic Institute and State University and a Doctor of Philosophy degree in Geosciences (1990) from the University of Arizona. He has practiced the profession of geology continuously since 1977. He is a Registered Member in good standing of the Society for Mining, Metallurgy and Exploration (SME, #4145342RM) and certifies that by reason of his education, affiliation with a professional association (as defined in NI 43-101) and past relevant work experience, he fulfills the requirements to be a “qualified person” for the purposes of NI 43-101. Dr. Newton has reviewed and approved the technical content of this press release.

Fremont’s mine-finding management team has assembled a portfolio of high-quality gold projects in Nevada with the goal of making a new discovery. Fremont’s Gold Bar and Gold Canyon properties are both past producing gold mines adjacent to McEwen Mining’s Gold Bar project, where mine construction is underway. Other projects include Goldrun, Hurricane, North Carlin, and Roberts Creek. We are aligned with our shareholders: management and directors own 26% of Fremont.