Fremont Gold Ltd. (TSX-V: FRE) (FSE: FR2) (OTC Pink: USTDF) is pleased to announce that it has completed the previously announced drill program at Gold Bar and Gold Canyon in northern Nevada (see Fremont news release dated May 9, 2018). Seven reverse-circulation drill holes were completed; two at Gold Bar and five at Gold Canyon, totalling 1,559 meters. The program was expanded from the originally announced 1000 meters in five holes, to seven holes, as the rate of drilling advanced more efficiently than anticipated. The initial batch of samples has been dispatched to American Assay Laboratory in Reno with analytical results expected in the coming weeks.

Mr. Derek White has accepted a position as an Advisor to the Company. Mr. White is currently President & CEO of Ascot Resources which is a TSX.V-listed company that is developing the Premier-Dilworth project in northwestern British Columbia. Derek has 35 years of experience in the mining and metals industry. He holds an undergraduate degree in Geological Engineering from the University of British Columbia and is also a Chartered Accountant. Prior to joining Ascot Resources Ltd. Derek was President and CEO of KGHM International Ltd. where he was responsible for the construction of the $1.2 billion Sierra Gorda copper mine in Chile. He has also held the positions of Executive Vice President, Business Development and Chief Financial Officer of Quadra FNX Mining Ltd. from 2004 to 2012 and held executive positions with International Vision Direct Ltd., BHP-Billiton Plc, Billiton International Metals BV and Impala Platinum Ltd., in Vancouver, Toronto, London, The Hague, and Johannesburg respectively.

Fremont President and CEO Dennis Moore stated, “Derek White is one of the most respected guys in the mining industry and has been involved in every aspect of the business, from exploration, to building and operating mines, with both large and small companies. Fremont is fortunate to have Derek as an advisor, and we appreciate his time and capacity to help the company develop.”

The Gold Bar and Gold Canyon properties are both former mines in the Gold Bar District in Eureka County, Nevada, an active mining area in the Roberts Mountains within the Battle Mountain-Eureka Trend. The district contains several Carlin-style sediment-hosted gold deposits including McEwen Mining Inc.’s (“McEwen”) Gold Bar project, which is scheduled to produce 62,800 oz Au/annum at $770/oz starting in early 20191.

Fremont’s Gold Bar and Gold Canyon projects are adjacent (west) and immediately north of McEwen’s Gold Bar mine development project, which is currently under construction and expected to be completed by early 2019. While McEwen’s development project and Fremont’s property share the same name, the historic Gold Bar mine is held by Fremont and produced 286,354 ounces of gold from 1986 to 19942. McEwen’s property comprises the former satellite pits to the to the original Gold Bar mine and they adopted the historical mine name. However, the original Gold Bar pit occurs in the south-central portion of Fremont’s 10,096-acre (4086 ha) land package, five kms southwest of McEwen’s project as shown in the inset of the image below. Fremont’s property hosts an historical resource of 147,000 ounces @ 2.57 g/t Au, called the Millsite deposit3 (see Fremont press release dated September 12, 2017) thought to be a faulted off-set of the former Gold Bar ore body located on the northwest side of the old pit. 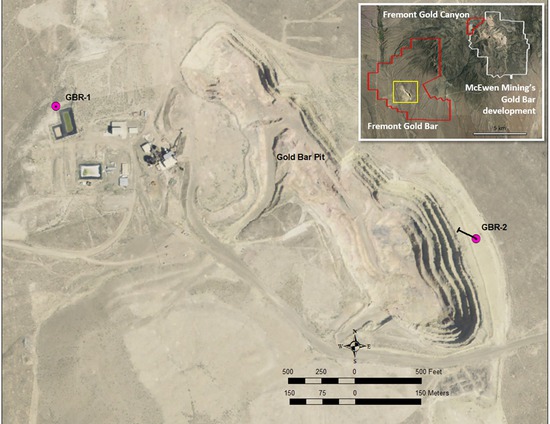 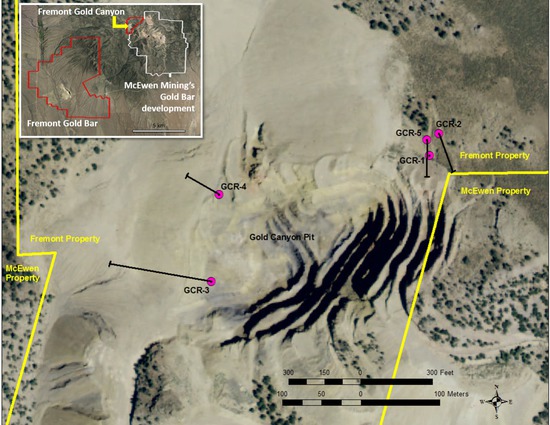 Fremont holds exclusive rights to the Gold Bar-Gold Canyon and Hurricane Projects, located respectively in Eureka County and Lander County, Nevada. Fremont also holds rights to the Goldrun Project in the Adelaide mining district, Humboldt County, Nevada and the North Carlin Project in Elko County. The Company’s strategy is to conduct exploration on its existing projects using the collective exploration expertise of the management team. Further information regarding the Gold Bar, Gold Canyon, Hurricane, Goldrun and North Carlin Projects are available at www.sedar.com.