Forum Acquires 100% of the Karpinka Property South of the Key Lake Mine, Athabasca Basin, Saskatchewan

Forum Acquires 100% of the Karpinka Property South of the Key Lake Mine, Athabasca Basin, Saskatchewan 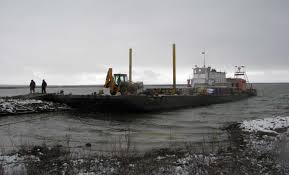 Forum Uranium Corp. (TSX-V:FDC) is pleased to announce that it has entered into a Purchase and Sale Agreement with Anthem Resources Ltd. to acquire Anthem’s 50% joint venture interest in the Karpinka project along the Key Lake Road Shear Zone, 30 kilometres south of the Cameco/AREVA Key Lake Mine. Forum is a 50% partner and Operator of the Karpinka Joint Venture and acquisition of Anthem’s interest will give Forum 100% of the project. Under terms of the Agreement, Forum will acquire Anthem’s 50% interest for 10,000 common shares and a 1% Net Smelter Royalty to Anthem with a 0.5% buyback provision by Forum for $1 million.

Several radioactive boulders grading up to 0.42% U3O8 were discovered in the early 1970’s and drilling did not locate their source. Anthem’s predecessor company completed a TEMPEST airborne magnetic/electromagnetic survey in 2007 which identified a sequence of strongly conductive horizons associated with the Key Lake Road Shear Zone (KLRSZ). Forum has been exploring along the KLRSZ since 2004 and entered into a 50/50 joint venture on the Karpinka property with a predecessor company of Anthem in 2009.

Forum Uranium Corp. is a Canadian-based energy company with a focus on the acquisition, exploration and development of Canadian uranium projects. Forum has assembled a highly experienced team of exploration professionals with a track record of mine discoveries for unconformity-style uranium deposits in Canada. The Company has a strategy to discover near surface uranium deposits in the Athabasca Basin, Saskatchewan and the Thelon Basin, Nunavut by exploring on its 100% owned properties and through strategic partnerships and joint ventures.