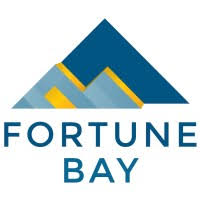 Fortune Bay Corp. (TSX-V: FOR) (Frankfurt: 5QN) is pleased to announce that it has closed its previously announced non-brokered private placement for aggregate gross proceeds of $2,013,045.   The Company issued 1,215,869 units and 395,717 flow through shares.  Each unit was issued at a price of $1.20 per unit, with each unit comprised of one common share and one-half common share purchase warrant.  Each whole warrant is exercisable into one common share of the Company at an exercise price of $1.60 per share for a period of two years.  The flow through shares were issued at a price of $1.40 per share.

The Company intends to use the proceeds of the Offering to fund exploration and project development at Fortune Bay’s 100% owned Goldfields Project and for general operating costs.

The Offering was led by Numus Capital Corp. In connection with the Offering, Fortune Bay paid a finder’s fee comprised of cash equal to seven percent (7.0%) of the gross proceeds received by Fortune Bay from the sale of the units and flow-through shares to Numus investors, plus share purchase warrants entitling Numus to purchase the number of shares in the Company that is equal to seven percent (7.0%) of the number of units and flow-through shares sold by Numus as part of the Offering, with each warrant exercisable into a common share of Fortune Bay at $1.60 per share for a period of two years.  This resulted in $140,913 in cash fees paid and 112,811 warrants granted to Numus.

In connection with the Offering, an officer of the Company acquired 16,667 units. The participation of an Insider in the Offering constitutes a “related party transaction”, as such terms are defined by Multilateral Instrument 61-101 – Protection of Minority Security Holders in Special Transactions. The Company is relying on an exemption from the formal valuation requirements of MI 61-101 available on the basis of the securities of the Company not being listed on specified markets, including the Toronto Stock Exchange, the New York Stock Exchange, the American Stock Exchange, the NASDAQ or certain overseas stock exchanges. The Company is also relying on the exemption from minority shareholder approval requirements under MI 61-101 as the fair market value of the participation in the Offering by the Insiders does not exceed 25% of the market capitalization of the Company.

Closing of the Offering is subject to the final approval of the TSX Venture Exchange.  All securities issued pursuant to the Offering will be subject to a statutory four-month hold period in accordance with Canadian securities legislation.

The 100% owned Goldfields Project is the Company’s most advanced asset located in northern Saskatchewan, approximately 13 kilometres from Uranium City, for which a historical Pre-Feasibility Study was completed in October 2011 in accordance with NI 43-101. The 2011 PFS envisaged open-pit mining of the Box and Athona gold deposits, located two kilometres apart, over 13 years with estimated gold recoveries of 91% and 89% respectively, processed at a shared mill facility with a capacity of 5,000 tonnes per day. Economic highlights from the 2011 PFS include an NPV (at a 5% discount rate) of CAD$144.3 million (pre-tax) and a 19.6% IRR (pre-tax) using a base case of CAD$1,250/oz of gold (exchange rate CAD$ = 0.96 USD$). Total capital costs were estimated at CAD$159.2 million including a 13.7% contingency. Mineral reserve and mineral resource estimates for the 2011 PFS (Box and Athona deposits) included; 1.02 million ounces of gold (22.3 million tonnes at 1.4 g/t Au) in proven and probable reserves, 1.03 million ounces of gold (20.9 million tonnes at 1.5 g/t Au) in measured and indicated resources (included in the proven and probable reserves), and 0.23 million ounces of gold (4.6 million tonnes at 1.5 g/t Au) in inferred resources. The Project is endowed with established infrastructure including existing roads, powerline, and nearby facilities and an airport at Uranium City. The Project has a history of gold production (64,000 oz Au produced between 1939 to 1942), numerous exploration drilling campaigns (~87,000 metres of drilling in ~750 drill holes) and various mining studies (including a 2007 Feasibility Study for the Box deposit for GLR Resources Inc. that was prepared in accordance with NI 43-101). The Box open-pit mine and mill development is permitted having received Ministerial approval under the Environmental Assessment Act in May 2008. The 10,300 hectare Goldfields property presents numerous exploration opportunities, including the potential to expand the Box and Athona deposits and discover additional resources at several other gold prospects and occurrences.