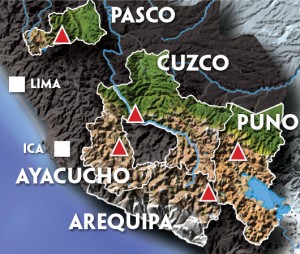 Focus Ventures Ltd. (TSX VENTURE:FCV) is pleased to announce that it has signed a Letter of Intent with Red Copper Resources Inc. whereby RCR can acquire a 70% interest in Focus’ Aurora porphyry copper-molybdenum-silver deposit, subject to legal due diligence and financing.

David Cass, President of Focus, comments: “We are very pleased to have reached an agreement with RCR, who bring a wealth of international porphyry copper exploration and evaluation experience to the project. We have made good progress to date at Aurora and look forward to working with RCR. Our joint goal is to delineate a large porphyry copper-molybdenum system at Aurora.”

Red Copper Resources Inc. is headed by CEO and President, Ian Gendall, who is a well-known expert in the exploration and evaluation of porphyry copper deposits and credited with major porphyry copper discoveries in the Corriente Copper Belt of SE Ecuador. Mr. Gendall has led and managed exploration teams for Gencor, Billiton, and Anglo American.

RCR will have an exclusive right and option to acquire up to a 70% interest in the Aurora property by making staged investments in exploration and drilling over a period of 4 years. RCR can acquire an initial 50% interest in the property by drilling 10,000m and investing no less than $3 million within the first 24 months of the issuance of drill permits, of which 3,600m of drilling and spending $1,200,000 within the first 6 months are commitments. RCR can acquire an additional 20% interest by completing a further 20,000m of drilling within 36 months of the granting of drill permits and investing a further $4 million, to include the completion of a Preliminary Economic Assessment or Pre-feasibility Study by the end of the 4th anniversary.

If RCR elects to continue the First Option after completing the initial investment of $1,200,000 and 3,600m of drilling, it must make a $500,000 private placement in common shares of Focus at a 15% premium to market, subject to regulatory approval. In order for RCR to exercise the Second Option, RCR must make an additional private placement in Focus of $2,500,000 within 30 days of the completion of the additional 20,000m of drilling and investment of $4 million. Focus will remain the operator of the project until RCR earns its 70% interest.

Focus has granted RCR a 45 day period from the date of signing of the Letter of Intent, to complete financing arrangements and legal due diligence.

The Aurora porphyry copper-molybdenum project is located approximately 65 km north of the city of Cusco, between 2,600 – 2,900m above sea level.

Observations and interpretations made from the re-logging of available drillcore by Focus and RCR have been key in the understanding of the deposit’s geometry and exploration potential. The Aurora deposit is interpreted as a series of mineralized tabular sills that have been deformed and tilted. The porphyry mineralization does not outcrop apart from a small area on the northern edge of the property around drillhole ABC-6.

Drilling in 2001 and 2005 (13 holes) intercepted significant intercepts of copper and molybdenum hosted by multi-phase quartz-feldspar porphyries and hornfelsed slates and pelitic sandstones belonging to the Ordovician (439 – 463 ma) Sandia Formation. Several of the shallower drillholes were terminated in intrusive rock grading +0.5% copper with grades strengthening towards the bottom of the hole (see drill results on the Focus website). Molybdenum-rich mineralization, characterizing the deeper parts of the sill complex, was drilled in ABC-6, which assayed 302.4m @ 0.082% Mo and 0.23% Cu for the length of the hole, including 84m @ 0.42% Cu and 0.11% Mo.

Results of Focus’s IP and Magnetic Geophysical survey support Focus’s interpretation that the Aurora mineralizing system extends well beyond the limits of the historical drilling over an area 1.5 km x 2 km and could contain a large porphyry copper molybdenum deposit.

A supergene enrichment profile marked by the prevalence of secondary chalcocite, is observed in many holes and accounts for the highest grade intercepts e.g. 26m @ 0.95% Cu in DDA-1 & 72m @ 0.7% Cu, in DDA 3A. Definition of this enrichment profile at Aurora will be an important aspect of the upcoming drill program.

Re-assaying of mineralized drill core by Focus (see news release, March 11, 2013) confirmed the presence of silver (not previously assayed in the historical drilling) that averaged around 4 g/t Ag in the cores sampled (see sample results on the Focus website).

Half core was split using a diamond core splitter and bagged, security-sealed and transported by Focus personnel to ALS Chemex laboratories in Lima. Silver, copper and molybdenum were determined by multi-acid digestion and ICP-AES. Gold was assayed by Atomic Adsorption Spectrometry. ALS Chemex’s quality control system complies with International Standards ISO 9001:2000 and ISO 17025:2005. Analytical accuracy and precision are monitored by the analysis of reagent blanks, reference material and replicate samples. Quality control is further assured by Focus’s own QA/QC program which involves the insertion by Focus personnel of blind certified standards and blanks into the sample stream at regular intervals in order to independently assess analytical precision and accuracy of each batch of samples as they are received from the laboratory.

The historical drill assays quoted in this press release were undertaken by Vena Resources and Bear Creek Mining, and have not been independently verified by Focus; however the sampling and assaying are considered to have been undertaken using standard industry practice and QA/QC procedures. Most of the drill cores were lost in years prior to the acquisition of the project by Focus, however half core samples from drill holes DDA-1, DDA-3 and DDA-3A remain.

Red Copper Resources is a private Canadian, copper focused, exploration and development company founded in 2010. Its aim is to grow into a successful copper company by targeting world class copper assets in Latin American countries such as Peru, Chile, Colombia, Panama, and Mexico. The company has a strong and experienced team in the copper sector with experience in the exploration, development, production and finance of resource projects. Red Copper is well positioned to leverage this exceptional range of knowledge to identify, acquire and develop copper resource properties with world-class potential.

Focus Ventures is developing a diversified portfolio of quality silver, gold, copper and phosphate properties in Peru, Mexico and Colombia. The Company is currently drilling at its Reventon Ag-Au property in Mexico and assembling a portfolio of phosphate assets in Latin America. Backed by an experienced technical team of geologists and consultants, Focus’s strategy is to identify and acquire former producing mines or untested mineral properties that show potential to become new mines.