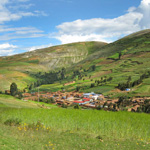 Focus Ventures Ltd. (TSX VENTURE:FCV) and Stonegate Agricom Ltd. (TSX:ST) are pleased to announce that they have signed a Letter of Intent pursuant to which Focus has the right to acquire, subject to successful due diligence, a 70% interest in the Mantaro phosphate deposit, located 250 km east of Lima in the District of Junin, central Peru. Phosphate is a key nutrient used in the manufacture of fertilizers and is an integral part of the food supply chain.

Mantaro, one of only a small number of phosphate deposits known in the Andes, is also one of the world’s largest undeveloped phosphate deposits. Phosphate mineralization is hosted in the Aramachay Formation, a moderately dipping sequence of Jurassic-aged marine sedimentary unit that has been folded and faulted, resulting in three parallel mineralized zones termed the West, East and Far East Zones. Each Zone has been mapped on surface over a strike length of over 20 km with a total of over 60 km of phosphate-bearing units defined by surface mapping and trenching, averaging approximately 25m in width.

Drilling and trenching in the West Zone during 2009 by Stonegate resulted in the definition of Measured, Indicated and Inferred Mineral Resources, described in the table below.(i) To the best of Focus’s and Stonegate’s knowledge, information and belief, there is no new material scientific or technical information that would make the disclosure of these mineral resource estimates inaccurate or misleading.

“We are pleased to have Focus Ventures as a partner on the Mantaro Phosphate Project,” said Mark Ashcroft, President and Chief Executive Officer of Stonegate. “We believe that Mantaro is a world class deposit. This transaction will permit further work on the Mantaro deposit to proceed while Stonegate concentrates on its Paris Hills Phosphate Project in Idaho.”

David Cass, President of Focus, comments: “South America is dependent on the import of fertilizers for its growing agricultural industry. Subject to successful due diligence, the acquisition of a majority interest in the Mantaro deposit will be a catalyst in the development of our phosphate assets and will put Focus firmly on the map as perhaps the only junior exploration company with a diverse portfolio of phosphate assets in Andean South America. The exploration and development of phosphate rock quarries to provide the source material for fertilizers and nutrient products, is a unique opportunity for Focus. Management of Focus intends to establish sustainable and ethical operations that would directly contribute to the domestic and international agronomic economies of Latin America.”

Stonegate has granted Focus an exclusive right and option to acquire a 70% interest in the Mantaro property by investing a total of US$25 million over 4 years in exploration, including permitting and drilling, and including the completion of a feasibility study and an updated NI 43-101 Measured and Indicated Resource calculation.

Focus will have 90 days from the signing of the Letter of Intent to conduct due diligence and raise a minimum of $2 million to spend on the property. If Focus decides to proceed, it will implement a community relations and stakeholder engagement program during the first 6 – 12 months of the option to obtain the necessary land access agreements and drill permits required to commence exploration and drilling.

During the first year Focus will decide whether: (a) the option will form a key project in a newly created phosphate company (“Newco”) (with the potential addition of Focus’s other phosphate assets in Peru and Colombia, including the 18,000 hectare Machay phosphate property located approximately 30km to the north of Mantaro), or (b) the option will be held 100% by Focus. As applicable, Stonegate will receive either a right to a board seat on Newco and 5.0% of the post-financing issued common shares of Newco, or 3.0 million common shares of Focus.

Finder’s fees will be payable if Focus proceeds with this transaction.

The 26,000 hectare Mantaro property is located in the Peruvian altiplano in the southern end of the historic Central Peru Mining District at an elevation of 3,600m – 4,000m a.s.l. The potential for a significant phosphate resource was recognized in the 1960’s by Cerro de Pasco Mining Corporation. Mineralization is hosted within Aramachay Formation, a Jurassic-aged sandstone-shale unit that extends for hundreds of kilometers along the length of the belt. The Mantaro property is strategically located adjacent to asphalt highways, rail and electricity grids.

Exploration by Stonegate in 2009 included mapping, trenching and drilling of 3,414m in 23 holes. The work tested mainly the West Zone and resulted in a NI 43-101 resource calculation (see above table). Six historic trenches with high grade phosphate intersections occur in the same area and to the north along trend and indicate that the mineralization is continuous over very long distances. In 2011 a further 29 holes were drilled at closer drill spacings for a total of 6,386m; however, no updated resource estimation was performed.

Mineralogy, processing and beneficiation studies in 2010 concluded that both oxide and unoxidized phosphatic ores at Mantaro could be successfully treated by conventional grinding and flotation techniques to produce a marketable phosphate concentrate of similar quality to that of Moroccan Phosrock (approx. 30% P205). Morocco controls a third of the world’s seaborne traded phosphate rock sold on international markets. Similar results were also obtained in previous bench work studies undertaken in 2006 and 2001.

Focus is acquiring phosphate projects in Latin America through its subsidiary, Agrifos. Projects acquired to date include the Machay and Quebranta phosphate properties in Peru, and in Colombia, Focus has optioned the Maria Luisa phosphate project and signed a strategic agreement with a local landholder.

Approximately 75% of global phosphate resources are from marine sedimentary phosphate deposits which are typically amenable to beneficiation to produce marketable phosphate rock concentrate or chemical grade fertilizers. Given the current global food crisis owing to the world’s growing population and economic development, crop yields need to increase and demand for worldwide fertilizers is expected to grow, particularly in new markets such as Brazil, India and Indonesia.

Focus Ventures is developing a diversified portfolio of quality silver, gold, copper and phosphate properties in Peru, Mexico and Colombia. The Company is currently drilling at its Reventon Ag-Au property in Mexico and permitting for drilling at its Aurora Cu-Mo porphyry in Peru. Backed by an experienced technical team of geologists and consultants, Focus’s strategy is to identify and acquire former producing mines or untested mineral properties that show potential to become new mines.

Stonegate Agricom, which is actively engaged in acquiring and developing agricultural nutrient projects, is currently focused on the development of two potentially world-class, long-life phosphate deposits, the Paris Hills Phosphate Project located in Idaho and the Mantaro Phosphate Project located in Peru. The Company is confident that the two deposits have sufficient size and grade to become strategic, cost-effective sources of phosphate supply for major fertilizer producers.